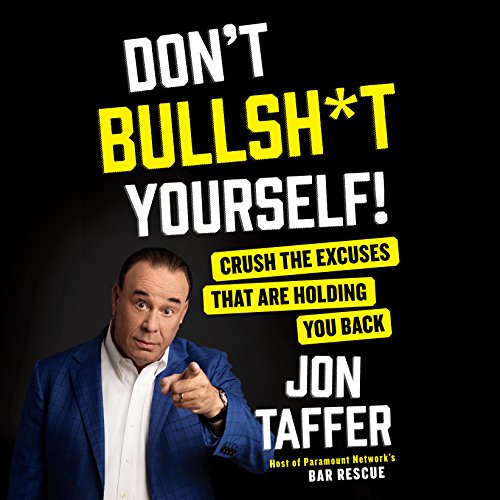 Jon Taffer, the popular host of Spike TV's Bar Rescue, doesn't sugarcoat - he tells it like it is. In Don't Bullsh*t Yourself!, he teaches you how to stop fooling yourself and turn your excuses into solutions, to improve your life and business.

As host of SpikeTV's hugely popular Bar Rescue, Jon Taffer gives struggling bars one last chance to succeed with a mixture of business acumen and tough love. Now, he offers his no-nonsense strategy for kicking excuses to the curb, with a dose of raw and refreshing honesty. He'll help you identify your excuses and take practical steps to fix them.

We all love to make excuses; it's only human. It's so much easier to pin the blame on everyone and everything else than to admit our own shortcomings. But when we make excuses, we are lying to ourselves. Jon Taffer is here to shut it down. He argues that if we can identify the real issue behind the excuse and address it in a straightforward way, we have the power to turn our lives around completely.

Doing what you've always done will get you nowhere. Taffer breaks excuses down into six major categories, offering real-life examples that are sure to instruct and inspire, such as:

You are your own worst enemy - if you own your failure, you can fight it. Jon Taffer in Don't Bullsh*t Yourself! gives you a chance to throw away your excuse crutches so you can get back to winning.

“An in-your-face, no-holds-barred guide to self-improvement. Follow Jon’s advice to take control of your life and business, and you’ll be able to achieve more than you’ve ever thought possible.” (Daymond John, author of The Power of Broke)

“Jon Taffer offers a bare knuckle self-help book that is guaranteed to help anyone’s life as long as you are willing to be honest with the one person who matters most - yourself!” (Brian Kilmeade, author of Andrew Jackson and the Miracle of New Orleans)

“Jon’s book has some insights that just may help you navigate through your own bull. . . . So get out the tall boots, honey, ’cause you’re gonna need ’em. I’m still wearing mine!” (Whoopi Goldberg)

What listeners say about Don't Bullsh*t Yourself!

great book for anytime of business owner or employee looking to go on their own!!

Good book, narrator could have been better

I wanted to hear what Jon Taffer has to say in this book. It’s great advice that can really be applied to any business or endeavor.

When I saw that RC Bray was the narrator, I was hesitant. While he has a pleasant voice, I soured on Mr. Bray after his performance on “The Squared Circle” by David Shoemaker, a book discussing death in professional wrestling. That book itself was barely readable to begin with on its own without RC Bray’s mispronounced names and glaring audio quality changes. For that book, I can only assume that Mr Bray self-directed and folks did a poor job of quality control.

While Taffer’s book had consistent audio, and was obviously directed by someone other than the narrator, I personally know at least 3 professional voice actors who could have done a better job. A better choice would have been if Jon Taffer himself had narrated or PJ King, the narrator of Bar Rescue itself.

I guess it’s true you don’t get a second chance to make a first impression.

Really enjoyed this. new perspectives and ways to look at the world. Thanks very much

The sample is read by the author and lead me to believe that the entire book was as well. The content was excellent and very useful. I've already listened to the book twice. I wish Jon had read his entire book not just the forward.

Yes, but I would tell them that the substance is there, but the guy reading does NOT fit Jon Taffer.

What was one of the most memorable moments of Don't Bullsh*t Yourself!?

What about R. C. Bray and Jon Taffer ’s performance did you like?

R.C. Bray's tone puts you to sleep, but the content is there if you can get past R.C. Bray's lack of enthusiasm. I mean this is Jon Taffer, so the person reading it needs to have Jon's personality exploding out to you and this guy sounds like he should be a science teacher.

I can catch myself now with excuses and I know how to avoid them.

Did I say that R.C. Bray was a horrible choice to narrate this book for Jon Taffer?

Am I the only one who finds it hilarious that in a book where Jon talks about overcoming excuses and putting in the work, he only narrates one chapter of the audiobook he wrote. I love Jon and his work but half the reason I bought the audiobook was to listen to him and not someone else

GREAT MESSAGE.....but the Narrator was not great

What didn’t you like about R. C. Bray and Jon Taffer ’s performance?

I didn't like the narration by R. C. Bray at all. If Jon himself narrated this book would have been the BEST OF ALL TIME!!!!!

I love the honesty.

It's only slightly brutal, so no harm done.
A good catalyst for getting your momentum going again.

Absolutely LOVED this book! The way I look at tasks and goals are changed forever. Reccomend this book to anyone who has ever thought about being an entrepreneur or any business owner!!!!

This is an excellent audiobook and the content is not only expert, but also presented in a digestible and actionable format. I do wish more than just the intro chapter were read by Mr. Jon himself, I would gladly pay for a 2nd edition read entirely by him. However, that shouldn't stop you from purchasing this audiobook; I debated heavily over whether or not to do so, knowing he only read the intro chapter, and I'm grateful to have made the decision to buy it.

This book is great for people who can't see a way out of their circumstances.

I learn as I fall asleep.

This book gives me the motive not to stop myself from doing what I need to do to get my projects around the house done. I keep replaying the book in bed when falling asleep over and over nightly to pick up the pointers that show me how to stop babying myself. This book speaks my language. If you don't mine getting it tough and straight, this book will touch you also.