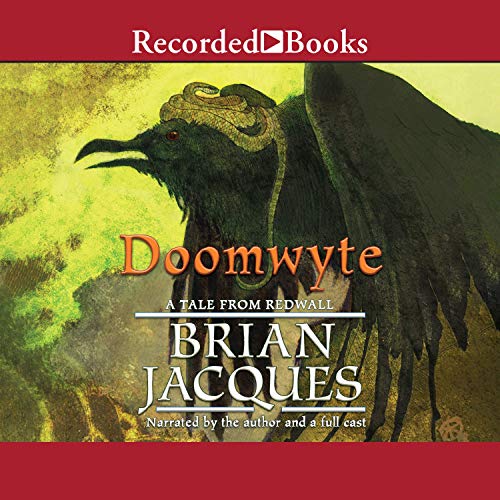 On a moonless night, two rats follow hypnotic lights into the forest, never to be seen again. Such is the power of the Doomwytes, sinister ravens led by the deadly Korvus Skurr. And when the young mouse Bisky persuades the creatures of Redwall Abbey to go in search of a fabled treasure, hidden long ago by one of the abbey's most notorious thieves, they do not suspect Skurr and his ravens will be vying for that very treasure.

Bisky and his fellow Redwallers must summon all their courage to face the evil horde of slithering snakes and vicious ravens. From underground tunnels to the tops of trees, the fearless Redwallers, with the help of their woodland friends, battle some of their most vicious enemies yet in an exhilarating, terrifying treasure hunt.

What listeners say about Doomwyte

Good, not the best

Redwall is always a good time, but this one isn't the best. Nothing wrong with it, but there are better books in the series.

I remember listening to these audiobooks as cds. Absolutely wonderful stories and production, but this recording on audible has odd sound quality issues. The volume is constantly dipping and rising in an obnoxious waves. I think it’s just an audio transcription issue. One I wish audible would fix.

I have listened to every Redwall book available on audible with the exception of The Sable Queen. This is the first performance that I am giving less than 5 stars. The volume of the voices in this performance changes randomly throughout the book. Not a huge issue, but I am still slightly disappointed.
I will continue to recommend these books as they are all amazing!!!

Fun and well-performed, but...

Great performances by a lively, thickly-accented cast. A fun adventure but a bit anticlimactic, l thought. Not one of the strongest entries in the redwall series.

A book well worth one's enjoyment. It has been the perfect beach book to hear behind the surf and breeze.

READ BEFORE YOU BUY! RECORDING ISSUES

Sorry for the clickbait title… if you’ve listen to any Redwall books, you’ll know they’re narrated by Brian Jacques and accompanied by a full cast. For this audiobook the volume of Brian Jacques voice fluctuates from barely audible to very loud. It makes this version almost impossible to listen to. I’m not sure why, as I’ve listen to many other productions and had no issues. If you’re listening to it in a car or with headphones while doing anything, you will likely not hear what is being said. I had to have the volume so loud to hear Jacques, when another character started speaking it blew my ears out. I finished the book by sitting in a quiet room and tolerating the recording issues… I don’t know if it’s an issue with the production company, or audible, but beware… I love the Redwall series, and it kills me to leave a bad review. Know what you’re getting into!

This is far from my favorite Redwall story, but I read all the books as a kid, and it's really fun sort of rediscovering them now. I know these are stories for kids/young adults, but even with how campy and cheesey this one was, I still thoroughly enjoyed it. I'd recommend some of the other titles first, especially Rakkety Tam, but this one is still fun.

Woohoo that was awesome, singing/storyline awesome

It was super awesome and just beautiful
my all-time favorite Red wall book oh my.....

not sure why I can't change the review. I would have rated a 5 overall.