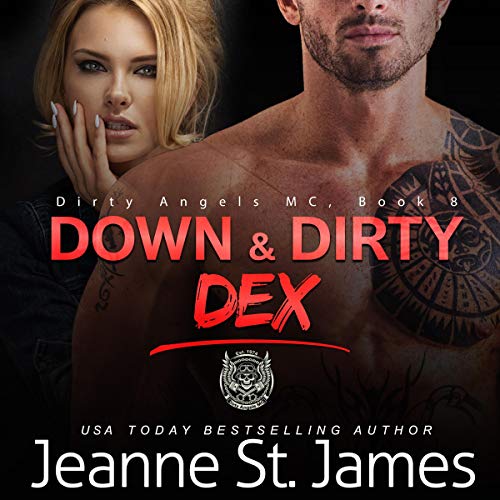 Welcome to Shadow Valley, where the Dirty Angels MC rules. Get ready to get Down & Dirty because this is Dex's story....

A stranger with a diary that contains a 30-year-old secret. One that could rip a brotherhood apart...

DAMC born and bred, Dex was never like the rest of his club brothers. Even though being a biker was his destiny, something was always missing. He could never figure out what it was or why until one day a woman walks into Shadow Valley Pawn. A sexy, badass woman who challenges him at every turn.

When Brooke discovers the truth about her mother after her death, she comes to Shadow Valley. However, a simple trip to find answers twists into something she never expects. Not only that, but the successful businesswoman crosses paths with a biker who tests the control she loves so much both inside and outside of the bedroom.

Unexpectedly, Brooke not only flips a switch inside Dex and shows him his true self, she learns it's okay to give up some of the independence she holds on to so tightly.

But that's not the only discoveries the two make. One secret shakes the club to their core by exposing a member who's been destroying them from the inside out.

Note: This book can be listened to as a stand-alone. It includes lots of steamy scenes, biker slang, cursing, some violence and, of course, an HEA. If you like alpha males who like to take charge, this book is for you.

What listeners say about Down & Dirty: Dex

I really enjoyed having someone completely new to this life come in and twist all these bikers up on their heads. In a good way.
A lot of things have finally come to light and I really am happy because I think it was the perfect time for it to all happen the way it did.

Brooke’s independence is a true testament of how much she has survived in her life and how she deals with it. I love that she is a little dominate to Dex’s more submissive but don't mistake that as not being manly because he most definitely is all MAN. But I like that in the bedroom he lets her take the lead. It really made for an interesting story.

The give and take really helped me to connect with both the characters I think if it had been too easy I wouldn’t have enjoyed it as much as I did. There was a struggle but not unnecessary struggle. I hope this makes sense. ;)

I loved the narration Jacob Morgan is a phenomenal narrator and is in the same league as Ava, and we all know how I feel about her and her voice is a crush ok I admit is I have a lady crush on the woman. If you listened to her you would too that is all I am saying. ;)

Loved this! Great addition to a fantastic series. Loved the story and characters and the narrators were amazing! Can’t wait for the next book in the series! I received a free review copy of this audiobook at my request and I have voluntarily left this review.

I’m going to start this off by saying as much as I love this series and all the characters this book didn’t capture my heart as much as all the other books. I loved Dex from the beginning but I found Brooke kindof hard to like. She was okay but she had a lot to live up to compared to all the other lovable ladies in the series and for me she just didn’t hit the target. I don’t think it was so much her but she was just way too strong willed for me and kindof rude at times. But other than that the story line itself was great and I did end up feeling very sorry for Brooke. She has had the worst stuff thrown at her time and time again and She was very lucky to have someone like Dex come into her life. The shocker of the book though comes with Pierce and what he did to betray his club/brothers because I never saw that coming! I’m not going to spoil it for anyone but holy moly Jeanne definitely through me for a loop with that bombshell and it was about time Pierce finally got what was coming to him. I also absolutely loved Ds reaction to the baby! It made my heart so happy!

I really like this series, but this particular book, not so much. I don’t really connect to this heroine and she can be such a bossy B at times. I’m down with a strong, independent woman but her need to dominate in the bedroom is just a turn off for me. It’s cool that Dex seemed to enjoy it but I wanted to cringe during the sex scenes...and some of the other scenes 🙄. If I have to hear, “I’m in charge” or “I'm in control” one more time i might lose it. Brooke’s arrogant, $itchy attitude was hard to deal with. And I loved Dex but lost respect along the way because he thought she could do no wrong. Let’s just say B and me...we wouldn’t be friends IRL...not for a million bucks. I realize a lot of readers will disagree but I like what I like. Parts of the story were interesting, especially as it related to the series as a whole. Excellent narration. Unfortunately, even Jacob Morgan couldn’t salvage this for me...this story was simply a necessary evil in order to proceed with the remainder of the series.

This is another amazing ride with the Dirty Angels MC. I really enjoyed this story about Dex and Brooke. I love how the brothers tease each other and my heart hurt during other parts of the book. Brook is a strong female and she might have been too strong at times, I liked how Dex let her be herself. Another great read, you won't be disappointed.

This was an amazing read and an even better listen! Jacob Morgan was the perfect Dex and did a fabulous job along with the always fantastic Ava Lucas. The heat and chemistry between Dex and Brooke is off the charts, and their story was fan-freaking-tastic! You get all of the MC action and drama, secrets revealed, the usual humor from the DAMC men and ladies, and let's not forget about the steam!!! Holy hell! Another wonderful fearful addition to this series.

Jacob Morgan once again delivers a stellar performance as Dex, and Ava Lucas is just as good in portraying Brooke. Brooke is a tough, in-control kind of woman, and Dex finds he enjoys being dominated by her. Even if he is a big bad biker. I liked that part of the story quite a bit.

However, I found the misogyny of the bikers to be pretty disgusting, and spent most of my time wondering why all these women put up with it. I have not listened to the other books in the series and likely won't: I bought this to listen to JM. MC stories are generally fairly repulsive to me for personal reasons. So, I have a bias here and you should be aware of that in making your decision.

The dramatic tension mostly comes from Brooke looking for her birth father, whom she believes was a member of the MC at the time of her conception. Come to find out, said father is one bad dude and he causes all sorts of trouble. Dex and the rest of the MC help her deal with all of this, albeit in a very 'you just sit there and look pretty while we do all the work' kind of way. Blech. Especially since Brooke doesn't take orders. Pretty much ever. And don't get me started on the whole 'old lady' thing.

Anyway, the performances are both a solid five stars, but the story is mediocre at best. Lots of sex, almost to the point of classifying this as erotica, but that part is pretty well done. If you like hot, if you like MC stories, if you can deal with sexist men, if you like dominant women, then this might be right up your alley. It was not my cuppa. Your mileage may vary.

Definitely worth the listen

Secrets revealed gave this a little different storyline. An Alpha female was a fun, exhilarating switch in the dynamic of the story especially with all the alpha males in Shadow valley and the DAMC.
Loved Jacob Morgan and Ava Lucas’s portrayal of Dex and Brooke.
Reviewed as a D&DBC member

The best in the series

Idk why people go in so hard on Brooke she's my favorite DAMC b*tch and she is a b*tch and it was hilarious. She put up with absolutely nothing. She's smart, fiesty, sassy, rude, defensive, dominant, hurt, kickass, guilty, helpless. She was everything. Dex wore her down until she was vulnerable with him.

I loved Dex. He's my favorite after Dawg. And he grew up a bit at the end. I wish they explored more of the kinky sex I know they were having and less on the intrigue. I was surprised that everything pretty much came to a head in this book when these characters were barely mentioned before.

I originally skipped this cause all the hate for Brooke. Those were lies. She's badass. Not like clueless Emma my least favorite heroine in this series.

Dirty, but not much else

I was less than impressed with the storyline in this book. The style was quite uneven and the story wasn't complete. There were many unanswered questions which I assume would be tackled in other books but the writing was not encouraging me to continue on with the series.

There were a few things I did enjoy in this book. 1) The sex scenes were great, especially since the female (Brooke) was the aggressor/dominant role and the male character (Dex) was more than willing to let her take the lead. That's not something I often see in the stories I read aside from one time experimentation. 2) Brooke was quite the badass and capable of taking care of herself. She didn't need Dex and he knew it, but they both wanted each other. 3) The narration by Jacob was well done, as usual, and even though some of the male voices done by Ava were a little off-putting, her performance as Brooke was good. 2/5 story and 3/5 narration.
❤️🎧❤️