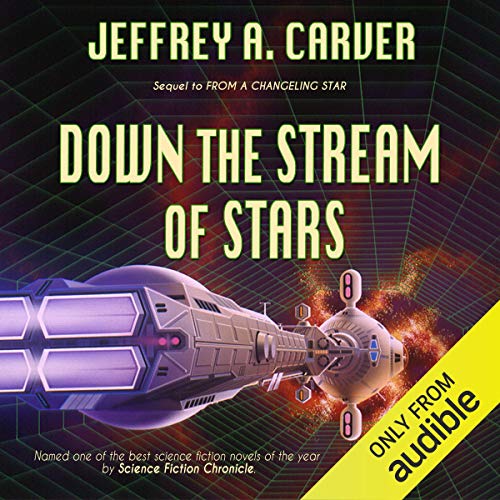 Down the Stream of Stars

Written by: Jeffrey A. Carver
Narrated by: Merrit Hicks
Try for $0.00

A great interstellar migration has begun, down the grand, ethereal highway known as the starstream - from the remnant of the Betelgeuse supernova to the center of the Milky Way. Who could have predicted the wonders of the starstream, or the perils it would unleash - including the Throgs, shadowy beings of n-space that seem to understand only death and destruction? But life goes on, dangers or no, and colonists pour down the starstream seeking new worlds. Aboard starship Charity are many such colonists, including one Claudi Melnik, a child of uncommon talents - and an AI named Jeaves, with purposes of his own. When the unthinkable occurs, Claudi must face alone the challenge of the Throgs. And no one, not even Jeaves, could have predicted the final confrontation - or imagined where unexpected allies would be found.

Triumphant sequel to the best-selling From a Changeling Star, Down the Stream of Stars is a daring journey across the gulf between human and alien, to the heart of consciousness itself.

Named one of the best science fiction novels of the year by Science Fiction Chronicle.

"I enjoyed it immensely. Carver provides another wild ride through a deranged cosmos. His imagination is matched only by his compassion. Marvelous effort!" (Jack McDevitt, author of Infinity Beach and The Engines of God)
"Carver's ingenuity is everywhere apparent." (Locus)

What listeners say about Down the Stream of Stars

Your Patience Will Not Be Rewarded!

It had a good story line, albeit an impossible one to even try to believe. I won't give it away though. A child might actually enjoy the rambling, never ending story. I kept my hope up that it would eventually cash in on its possibilities- but it never did. It was like watching Mr. Rogers Neighborhood for ten hours straight, bordering on boring. Still, for a child it might be interesting.

What was one of the most memorable moments of Down the Stream of Stars?

I enjoyed the 6-7-8 year old battle scenario in which one boy is "killed" in saving the "captain." The writer was infinitely patient in producing this book. That showed all the way from beginning to end. That's one reason I rated it as high as I did.

Have you listened to any of Merrit Hicks’s other performances before? How does this one compare?

Could you see Down the Stream of Stars being made into a movie or a TV series? Who should the stars be?

It could be a TV series, you know the kind that never reaches a resolution!

The author's passion seems to be CARING. The interactions of even the gruff characters showed that caring attitude. His computer teacher showed it. The entire book impressed me with a fantastic attitude toward children and their feelings. The author must be a really great guy in person.

I bought and read this book in an attempt to better understand the first book, Changling Star.
While Changling Star was frustrating and nearly impossible to follow in thw first half of the book, it still ended up being a good book.

This sequel, however... well, suffice it to say that this book has turned me off to trying any of Carver's other works.

On top of a weird and just plain unenjoyable book, the narration was aweful, making the confusing book worse. Merrit Hicks has poorly discernable voices for most characters in this book. Nearly half the voices are so different, I knew after the first introduction of each which one was which. This made the lack of differentiation in other voices even more frustrating because I knew she COULD have produced more dissimilar voices. All the others were so pitifully voiced that I lost track of dialogue trying to keep up with which voice she was speaking in.