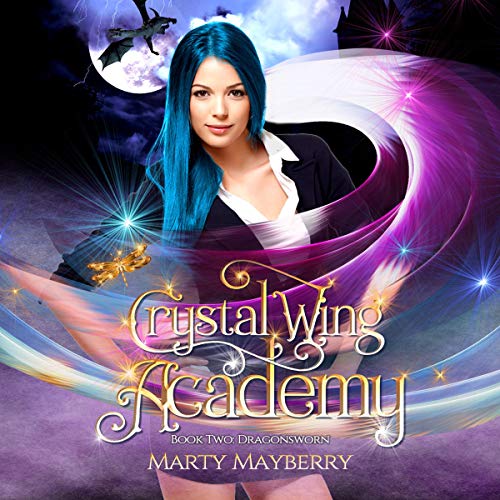 Written by: Marty Mayberry
Narrated by: Nicole Parnell
Try for $0.00

After destroying a power-sucking slake before he killed my friends, I'm feeling stronger and more confident than ever.

Donovan and I are together, I'm pulling in more threads than before, and I have new abilities I'm excited to master. So what if I might be flunking Magical Creatures & How to Tame Them - not everything comes easy, right?

Then I stumble over a dead girl - one of eight Outlings at the Academy - and she's marked with an zero and a seven, it's clear someone's copycatting the Outling murders that took place 100 years ago.

With the clock ticking down and more Outlings turning up dead, I'll soon be next. Last time, every Outling at the Academy was murdered.

But the killer is about to learn this Outling wizard won't go down without a fight.

What listeners say about Dragonsworn

I am taken a back by all the emotion in this series. I have laughed and cried. I love all the character voices and the suspense.

Great job. The narration in this audio book by nicole is well done. She gave each character a unique voice that is easy to identify, her emotion brings all the characters to life in a way that is soothing to listen to and realistic to envision.

Overjoyed with the Narrator

I must say, for me ~ the main reason why I like this book so much is because of this Narrator, Nicole Parnell.
I am one of those book listeners, that Narrator is paramount if I am to enjoy listening to a book, in place of reading!

The lift and movement in the readers' reading voice, is enough to engage me deep into the story. This is what keeps my interest in the story and also to look again for the Narrator like Nicole when searching for a book to purchase on Audible!

I again, look forward to Nicole's next book narration.

The sexual tension is so hot! And I am absolutely mind blown by all the voices. Excellent narration. Very engaging... I can’t stop listening!