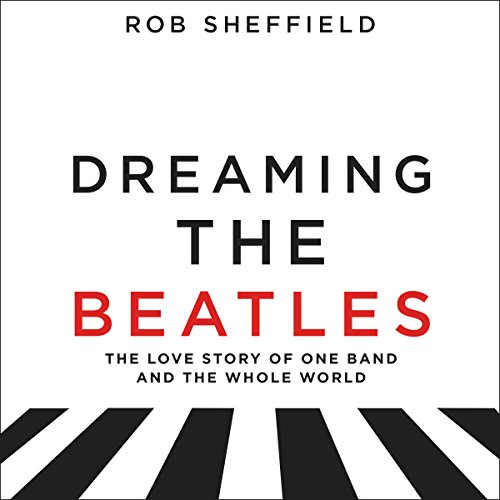 Rob Sheffield, Rolling Stone columnist and best-selling author of Love Is a Mix Tape, offers an entertaining, unconventional look at the most popular band in history, the Beatles, exploring what they mean today and why they still matter so intensely to a generation that has never known a world without them.

Dreaming the Beatles is not another biography of the Beatles or a song-by-song analysis of the best of John and Paul. It isn't another exposé about how they broke up. It isn't a history of their gigs or their gear. It is a collection of essays telling the story of what this ubiquitous band means to a generation who grew up with the Beatles' music on their parents' stereos and their faces on T-shirts. What do the Beatles mean today? Why are they more famous and beloved now than ever? And why do they still matter so much to us, nearly 50 years after they broke up?

As he did in his previous books, Love Is a Mix Tape, Talking to Girls About Duran Duran, and Turn Around Bright Eyes, Sheffield focuses on the emotional connections we make to music. This time he focuses on the biggest pop culture phenomenon of all time - The Beatles. In his singular voice, he explores what the Beatles mean today to fans who have learned to love them on their own terms and not just for the sake of nostalgia.

Dreaming the Beatles tells the story of how four lads from Liverpool became the world's biggest pop group then broke up - but then somehow just kept getting bigger. At this point their music doesn't belong to the past; it belongs to right now. This book is a celebration of that music, showing why the Beatles remain the world's favorite thing - and how they invented the future we're all living in today.

What listeners say about Dreaming the Beatles

At the same time, Sheffield doesn't force his opinions on you as if he's right, and if you don't agree, you're wrong. He states them as his opinions and talks about how other opinions differ.

I have listened to a number of Rob Sheffield books at this point, and I really enjoy the sound of his voice and his reading style. Your results may vary. :)

This isn't so much a history of the Beatles as a loosely chronological collection of essays. It's engaging, well-informed, and highly opinionated; it covers the group, the individuals in the group, the music, why many of the songs are brilliant but a few are rubbish, and why and how the world bowed down in homage. If you're a Beatles fan, get it. If you're a Stones fan, get it too - you'll find some useful information here.

Sheffield does a great job narrating his own book, with one exception. His occasional attempt at a British accent (usually in a quote from a Beatle) is pretty bad. Aside from that, he's one of the best writers-as-narrator I've heard. His passion for the subject comes through in his voice.

If you are like me, especially on this 50th Anniversary of Sgt Pepper, you've read some, possibly many books on my favorite subject, The Beatles. And like the escape they provided in the early 60's after the Kennedy assassination and since, this book and the journey it provides functioned as yet another escape in these most difficult political times. Worth spending time together.

Listened to It 2x Back to Back

I can say that I have read or listened to most every Beatle book there is: from Spitz, Lewisohn, and Doggett, to Asher, Davies, McDonald, and Womack. And this book is the best one.

At first I was hesitant about purchasing this audiobook. Especially when the description described it as the personal opinion of the author and what The Beatles meant to him. I usually don’t want to read or hear about what the writer has to say about his own feelings and how the Beatles affected him. And then when I started to listen, the first thing I hear is a beatlesk song that in some far and remote world sounded like Day Tripper (but wasn’t). At that point I thought I made a big mistake. But not wanting to lose my audio credit I persevered and boy am I glad I did.

The author, who does a great job reading his book, tells a fantastic story that is both historic and personal; taking you along his discovery of the Beatles and his opinion of what they mean to us. Maybe I’m a little prejudiced in favor because his introduction to the Beatles was the same as mine — discovering an older sister‘s “Help” album and playing it over and over and over again. (Heck, I even can whistle the instrumentals on the American album.)

And just like me, when he got his hands on the 1987 CD RELEASES (the real albums and not the Capitol Records cut ups), his confusion and dislike of the “new” was right on the mark; (like waiting for the James Bond intro to start the American album that I grew up with.) And yet even when he realized the horror of what Capital did to their albums, he still reminisces over the American records that we grew up listening to. The author does a great job of describing this feeling that I am sure every American Beatle fan went through in 1987.

And as far as listening to the audiobook, the author does a great job reading the material. He has a nice voice and his inflection really makes the book come alive. In one chapter when he describes the Beatlemania scream, you can almost hear it in the background as he reads the chapter. And when he talks about the songs, you stop the book, open up iTunes, and play the song so you can see and understand what he is describing.

I’ve been a Beatle fan since I was six years old and half a century later there isn’t much left to be surprised with and the author manages to do just that.

Every three or four years I go through my Beatle phase where I listen to all of the music again and read two or three new (to me) books. So began this year‘s phase. Unfortunately, I do not believe I’m going to find a better book than this one. I did listen to Robert Rodriguez’s book about his opinion that the real masterpiece in the Beatles catalog is Revolver and not Sergeant Pepper.

If I was stranded on the moon with only one book, this one would be it. Bravo Mr. Sheffield. Bravo!

Faded toward the end

I really enjoyed the first half, three quarters of the book. I learned a lot and will looking for the boots he speaks of. Minus one star for saying at one point Dylan was trying to keep up with the Beatles and for the comment on Neil Youngs’s Tonight’s The Night.

An informative and wild adventure with The Beatles and Rob Sheffield

This is a fun and telling book about The Beatles. I recommend this book to any and every Fab Four fanatic out there. It is also for everyone who just likes music and it's history through one band. The author and narrator, Rob Sheffield, paints a vivid picture of not only The Beatles throughout history but why certain things happened in their lives i.e. The Paul is dead theory. Maybe that is real, maybe it's not. If you are the least bit curious about The Beatles or if you want to find out if you are more John or Paul this audiobook is for you. So have fun, sit back, and let the wild adventures with The Beatles and Rob Sheffield wash over you.

If you love The Beatles, this is a fun read!

Are you a Beatlemaniac? Listen to them every week? Taught your kids The Beatles? Think The Beatles? Then this is your book. Fun, insightful, educational, arguable and more. Wonderful narration by the author. Love to John, Paul, George and Ringo (and George Martin).

The first five minutes sound like a book report by a clever Sixth-grader, but it soon becomes an entertaining and informational treat, containing much that is either new or a fresh opinion about some event. While I disagree with Sheffield on some opinions and interpretations, this is an excellent discussion by a fan and Amanda who knows music and performers. Well done.

I really enjoyed this book. The content is absolutely top-notch, and the writer is extremely skilled. His (writing) voice is distinctive and always interesting. He really opened up the subject for me. I learned a great deal about the Beatles and what they mean to us today. It was a fascinating investigation and discussion.

it isn't about The Beatles but ABOUT the beatles

This is the book I would have written if I could, not so much a history of the band, though that is used as a framework, but instead a love letter to the band and the fans.

This book is not badly written. The author is actually a pretty good writer in some ways. The problems, however, are many. To name just a few:

I’ll note that I really do like the Beatles a lot. They’re not my favorite band of all time, but they’re great. But honestly, if anything, this book detracted from my experience of the Beatles. I wanted to like this book, and I am sure somebody is going to love it, but it was really not my thing. Maybe I just picked the wrong book.