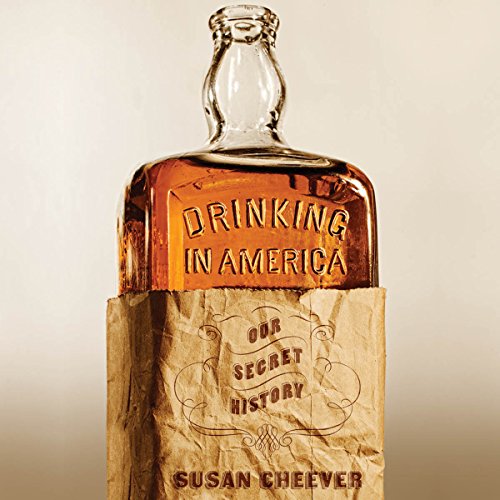 In Drinking in America, best-selling author Susan Cheever chronicles our national love affair with liquor, taking a long, thoughtful look at the way alcohol has changed our nation's history. This is the often-overlooked story of how alcohol has shaped American events and the American character from the 17th to the 20th century.

Seen through the lens of alcoholism, American history takes on a vibrancy and a tragedy missing from many earlier accounts. From the drunkenness of the Pilgrims to Prohibition hijinks, drinking has always been a cherished American custom: a way to celebrate and a way to grieve and a way to take the edge off. At many pivotal points in our history - the illegal Mayflower landing at Cape Cod, the enslavement of African Americans, the McCarthy witch hunts, and the Kennedy assassination, to name only a few - alcohol has acted as a catalyst.

Some nations drink more than we do, some drink less, but no other nation has been the drunkest in the world, as America was in the 1830s, only to outlaw drinking entirely a hundred years later. Both a lively history and an unflinching cultural investigation, Drinking in America unveils the volatile ambivalence within one nation's tumultuous affair with alcohol.

What listeners say about Drinking in America

Revisionist history at its worst

Would you try another book from Susan Cheever and/or Barbara Benjamin Creel?

I applaud Cheever for overcoming her addiction; however, she is clearly not an historian. She approaches American history and specifically watershed moments from the perspective of alcoholism. She proposes heavy-handed reinterpretations of these events while offering scarcely more evidence than the fact that brandy was in the room. She implies, for example, that the Pilgrims on the Mayflower landed in Plymouth rather than their planned destination (near present-day NYC) because were ill-prepared for the New World because they were drunk, not because the waters around Long Island were dangerous, nor because the pilgrims were city-dwelling shop owners who wouldn't have known the first thing about building homes and infrastructure from scratch. The book is riddled with this kind of sloppy research. Very disappointed.

Good listen. The book is full of information and from a perspective that seems seldom seen.

I was unaware of the part drinking has played in the history of the United States - I am not sure it was as influential as the author declares, but I learned much from her account.

More in-depth research. Was really into the book until a line in the book turned me off entirely. There was a comment made about Thomas Meager falling off a boat and drowning because he was drunk. There is no decisive proof that this was the situation and there were other factors that may have been at play. He indeed may have been drunk, but there is speculation that he may have been ill or he may have been murdered by enemies who were aboard the same boat. The cause of his death has never been clearly determined. For Ms. Cheever to unequivocally state that he was drunk and fell off the boat to his death made me question every fact she included in her story and this damaged her credibility with me. I can't even finish the book because I do not know what to believe and what not to believe.

Further, Ms. Cheever's story reads like a law school exam. Very thoughtful and meticulous for the first part of the book, then everything else is dumped in the pages in a fitful and purging manner. A large portion of the book is spent on the Adams family and then mere paragraphs are spent on the seemingly unimportant events in history such as the Civil War. It is as if Ms. Cheever realized she was running out of time and because of this the story bounced around like crazy to the point where it became hard to follow.

Has Drinking in America turned you off from other books in this genre?

Which character – as performed by Barbara Benjamin Creel – was your favorite?

What character would you cut from Drinking in America?

Go back and do the research more fully before branding historical figures as alcoholics. Back up what is stated with all the facts and not mere speculation. This book had the potential to be fabulous.

I wanted to like this book. One of its main undercurrents is the fact that alcohol has a large and important role in our history and that it is over overlooked in official historic tracts. This is interesting and I think well laid out.

However, the book often veers from historical recounting (what I find more interesting) to opinions that are sometimes questionable. It can be hard to discern which parts are the author inserting her impressions (which I often find cause to doubt) and which are factually documented. Also-at times the author's tone becomes judgmental.

The treatment of history is uneven and often spends too much or little time on certain topics (too much time on American writers who were alcoholics and too little time on the transition from alcohol as necessary dietary requirement due to non potable water to enjoyment).

Ultimately, cannot recommend this book. The premise is promising but ultimately the execution is flat.

P.S. Some have criticized it for being "liberal" interpretation. I would agree with that idea broadly. At times, the bounds are overstepped.

Some what liberal interpretation of history.

Taking drinking in context to historical events, this author opens reader's eyes to a part of history not taught in schools...but it should be.

..Secret history of celebs. My fault, I think I was looking for something about bootleggers rather than a history of the drinkers who are famous. I consider then to be a small effect of drinking in America.

A 30 minute YouTube video would've accomplished the same thing.
Last Call is much better on this topic

Would you try another book from Susan Cheever and/or Barbara Benjamin Creel?

Maybe after a couple of drinks.

Would you recommend Drinking in America to your friends? Why or why not?

I would recommend it, but it is a topic that may not appeal to most readers though.

What about Barbara Benjamin Creel’s performance did you like?

Kind of neutral. Nothing stood out as either great or poor.

This book is not suited to be a movie. Mostly American history based around our obsession with alcohol.

A little dry for my taste. No pun intended.

I thought I was getting a history of drinking. while there were some interesting facts, what this book does is allow the author to speculate and draw loose conclusions on why certain events happened. She all but blames the assassination of President Kennedy on the drinking of Secret Service men. She also uses this book as a forum for railing on conservatives as well as Nixon and Bush. I was very disappointed.