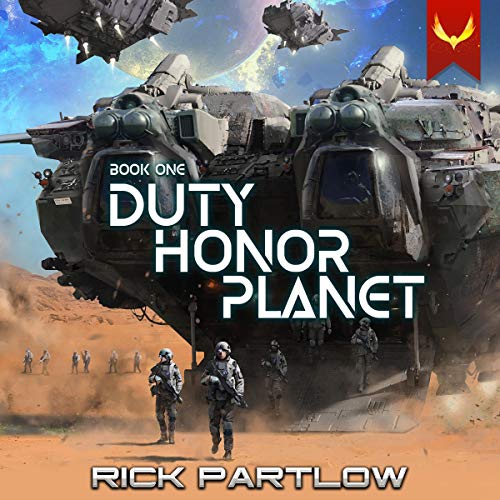 Written by: Rick Partlow
Narrated by: Ryan Burke
Try for $0.00

We thought we were alone....

We’re going to wish we were.

Jason McKay and Shannon Stark, two young Republic Space Fleet Intelligence officers, are given the leadership of a new special ops unit. The mission? Guard the spoiled daughter of an important senator on a tour of the colonies.

Neither of them thought the mission would be anything more than babysitting...until the aliens invaded the colony.

Implacable, relentless, merciless, the armored creatures slaughter everyone who gets in their way. The team is forced to go on the run with the people they’re supposed to protect.

But survival will be the least of their challenges. Because it’s not as simple as an alien invasion, and the truth may be even stranger than they can imagine.

Jason and Shannon are forced to weigh the lives of the people they lead - and the ones they love - against their duty, honor, and planet.

Don't miss this thrilling military sci-fi series from the best-selling author of the Drop Trooper series. Grab your copy today!

couldn't even get past the second hour

The main character lacks any maturity. Lack of respect for any one and as a special ops officer lacks any awareness of his surroundings or the ability to read others. This book reads like it was written by a self important teenager.

Run, do not walk, to get this book

This author, in my opinion, is no skilled writer. Very juvenile writing and dialogue. OK story, but the reader is no help to the overall story. If you are an adolescent, have no expectations. If you are adult, pass it by.

Firstly, you NEVER, NEVER EVER sleep with ANYONE under your command!!! That is so wrong it is up there with incest. It is like driving over an ied. If it blows, you might survive it, but not likely.
Once a Marine, always a Marine. That will ALWAYS be a fact as long as there is a Marine Corps that is or will evolve from the United States Marine Corps. One other thing, Marines DO NOT SAY SARG!!! We EARN our ranks, and the Army says Sarg. So as much as we love the Army when SHTF, we do not like being confused with them. Any of my Marines would have called me Sarg and they would have got a painful wall 2 wall counseling.
As for the book, it is good, as is most of Partlow's work. It is his usual military sci-fi, space alien slaying hero protagonist saves the day. Rick Partlow has made the main character Lt. McKay about as close to dumb as one can get. He is caught multiple times where his situational awareness was below complacent when it should have been dialed to the max. I can tell Partlow was definitely Army and probably never had to fire his weapon or had a weapon fired at him in combat. In all his work he actually has special forces style characters doing ignorant crap that a cook would do and not the actions of highly trained infantrymen. One irritating thing, shrapnel does not make scraping sounds on the roof of a vehicle that was not in the blast radius of an explosion. That is the worst line I've ever read (or listened to) in any of Partlow's books.
Oh, you NEVER jerk a trigger! I don't care what you are firing. You squeeze a trigger with ONLY your trigger finger. When you JERK a trigger, you use muscles in your shoulders and arms and pulls the muzzle out of your natural point of aim. Boot ignorance is unacceptable in actual former military authors. Pitiful, Partlow. Do better next time.

Stoked to start a new one

Just came off of Drop Trooper. Book one here is awesome. I loved the narrator on Drop Trooper, so the transition was tough, but Burke does a fine job as well.

Not sure if I was listen to a smut book or a military Scfi book.

I was really looking forward to this book. I just got done with the Drop Trooper series and I loved it. So I was really disappointed with how this book turned out. The story is so boring that I almost fell asleep every time I listened to it. Also, there is this weird love circle thing going in with several of the main characters. The narrator is so bad that there were times that I couldn’t tell who was talking because most of the characters sounded the same. And he wouldn’t take a pause when the story would change halfway through the chapter so sometimes it got confusing on what just happen in the story. Also, at one point he was supposed to be voicing a Russian character and changed accent half way though the monologue. I would not recommend this to anyone. Just go listen to Drop Trooper if you haven’t yet.

Holy cow. The pacing of the story is really bad but typical for a self published book. Cliched mary sue character. Everyone's clothes seems to fall off and they fall deeply in love at first site. Combat strategy? eh, who needs that right. Realistic world? not really needed either. But that's the first half of the story -- the good half. The second half is so incredibly stupid it is indescribable.

Narrator was good. wonder how he read the story out loud without laughing.

Special ops with a side of alien invasion

Jason McKay led an engagement he did not agree with. He achieved the goal but a lot of lives were lost. When the person who requested the help was talking about it and laughing Jason punched him. He thought he would be court martialed and thrown in prison. Instead he was promoted and given control over a new special ops unit. When Jason reports to the officer in charge nicknamed the ‘Snake’, he finds a man he appreciates what he accomplished given the fact that the orders were bad and he was outgunned.

As part of his team, he has second in command Shannon Stark, who believes she should be in charge. Vinny and Jock round out the crew amongst others. His first mission is to babysit a spoiled senator’s daughter who has written a thesis on the abuse that colonists go through and who is looking to cut funding for the military. The senator’s daughter and her finance won’t listen to their security advice and things start to go bad until they get worse when aliens start dropping from the sky.