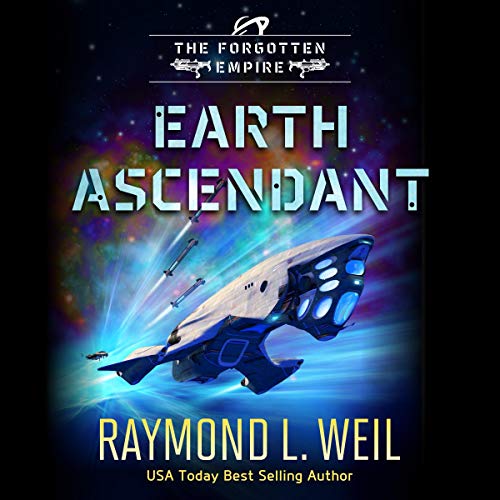 Fleets meet in combat as the fate of worlds is decided. Earth is hopelessly outmatched as the Confederation controls thousands of inhabited planets. Their resources seem almost unlimited, and Earth only has the Solar System.

In a surprise move, Captain Derrick Masters makes a daring foray into Federation space to discover any Confederation weaknesses and uncovers a horrifying secret. For over a thousand years, the Federation has been conscripting young humans from the empire to use as slaves.

In a dangerous gambit, he manages to learn the fate of those humans. Realizing the only hope Earth has is to bring the former Human Empire into the war, Earth launches a massive attack to free the empire. If they fail, then Earth itself will become a slave world of the Confederation.

What listeners say about Earth Ascendant

This is an awesome series. I have saved it for a while now because they’re the last of his books. This series has a great story with lots of twists and turns.

Would give 5 stars, but then they pull...

Very enjoyable so far, I just woke hour that this far in the future people would still not be bending the knee to a monarchy and worrying about proper court behavior.

Being a USA citizen , I have never understood all of the hoopla over the Queen and I could give a crap if her skirt is above her knee by a half inch. but, I would like it if they got rid of those stupid hats!!!

But other than the adherence to royalty, enjoying the series.

p.s. maybe someone should plan ahead and put pictures of the outfits that Princess Diana wore, especially the gowns. lol