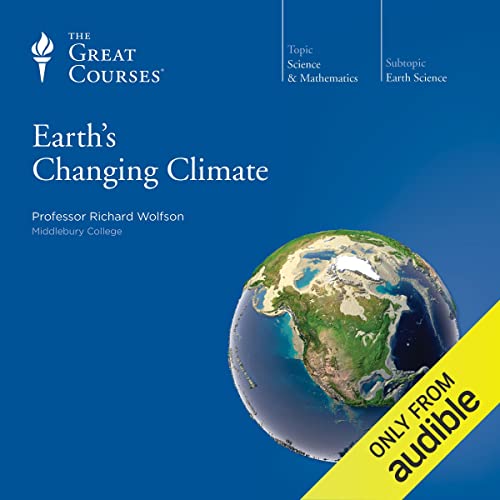 In 2007 the Intergovernmental Panel on Climate Change-representing a global consensus of hundreds of scientists-concluded that "warming of the climate system is unequivocal," citing observations of increases in global average air and ocean temperatures, widespread melting of snow and ice, and rising global mean sea level.

And they noted that human activity is "very likely" the cause. Whatever your views on climate change, it's important to understand how the current scientific consensus on global warming evolved out of basic physical principles and a broad range of observations.

This lucid series of twelve lectures is designed to do exactly that-reviewing the most up-to-date research and explaining the concepts, tools, data, and analysis that have led an overwhelming number of climate scientists to conclude that Earth is indeed warming and that we humans are in great part responsible.

In clear and accessible lectures designed for nonscientists, you'll learn about the "fingerprints" of global climate change-ranging from borehole temperatures to melting glaciers to the altered behavior of plant and animal species and other indicators-that convince scientists that our Earth has been warming at an unprecedented rate in recent decades. The lectures address only scientific issues and make no policy recommendations. Instead, they have been designed to serve as your personal scientific briefing to equip you to engage knowledgeably in one of the most important environmental issues of our time.

Professor Wolfson refers to graphs that are not available to the audible customer. Much is lost in the failure to provide appropriate material.

I read the disclaimer: Please note that this recording may include references to supplemental texts or print references that are not essential to the program and not supplied with your purchase. This was incorrect. Unfortunately, Professor Wolfson felt differently. He constantly refers the listener to accompany graphs, charts and maps. Additional reference material via a link on Audible should have been provided. Many other books have given Audible customers proper materials to clarify the scientific matter and optimize the listener experience. . .

Weather is day to day, climate is long term.

I finally have more knowledge to fight back with climate change deniers thanks to Prof. Richard Wolfson.

These 12 half hour courses are fairly easy to understand, (some of it I know I will forget) and show the various reasons scientists have concluded that man since the industrial revolution has been upsetting the balance of the ozone layer which helps maintain our climate.

3Ice Ages and Beyond

5A Tale of Three Planets

What I liked about the classes and this professor (from Middlebury College) is that he stayed away from the politics of the issues and relied on the facts. He also said he believed that mankind could survive climate change because it was happening slowly enough that we would adapt. However, if we stopped relying on fossil fuels for our main source of energy we could stabilize the climate around 2100. At this point, that is the best we can do. The earth will not be the same as now but we should be able to survive in this warmer world.

I recommend this course for anyone interested in the science of climate change and wanting to learn. The audible course does not have his charts or maps but with a little google searching you can find the majority at NASA or the EPA.

This series describes how we know about human-caused climate change and the problems resulting from it. It does so without either dumbing-down or going over its intended audience. Excellent.

I wasn't impressed with this lecture series but wonder if the method of delivery might have something to do with it.

My Great Courses library contains over 25 DVD courses and they are mostly in the 90% percentile for excellence. To date I have purchased three courses on the audio format and have not been impressed with any of them. I'm not sure if it is because the audio format fails against the full video courses or if I have simply chosen courses that do not come across well in audio alone.

For example, Greenberg's Wagner course is awful. He is constantly detracting from the material with sophomoric jokes. Without the silliness, the course would be excellent. Can't blame audio for that. I also purchased the Divine Comedy course. It's like a radio program with two panelists supporting each others position. That's right Bob, Dante based his work on the Bible! Sure Dave, and he used the style of the time.

I find it a bit annoying but haven't passed judgement yet.

This course didn't appeal to me at all. I do like professor Wolfson and greatly enjoy the video series, "Physics in You Life". In this course, he speaks way too fast. I had hoped to gain some scientific insight into climate change but there really is not any new material here. Essentially it amounts to telling us the earth is getting warmer, the warming is caused by carbon and man is at the heart of the problem.

If you already understand that, save the credit.

I wanted to understand the arguments that go like this: The earth has been warmer in the past, well before man, why? How did it cool? Why was the temperature so much higher 200 million years ago? Yes, there was a mini ice age 400 years ago, why? I know these questions do not have definitive answers but I had hoped for some science on those questions.

Also, I believe Wolfson is too definite on his outlook for the future. Carbon content goes up, temperature will rise by this range. He mentions that the earth my have trigger points which could cause climate to change in an opposite direction and then dismisses that in a sentence. I'm not so sure.

The earth is a lot more complex than Venus which is always used for comparison. I don't think we can say with certainty that a temperature increase here will not cause a reaction leading to a decrease in temperature there. For example, if warming causes the heat conveyor of the Atlantic to stop delivering warmth to England, then Europe could plunge into a deep cold period. It is not clear if this is possible but the oceans distribute heat---altering currents can change climate.

Okay, this isn't about my theories. The course is rather basic and might be better in video format.

If you are completely new to the subject, give it a go. If you already have some background, you can probably skip this without missing anything.

Too fast. Too shallow.

Understand our past for our future

It's easy to fall into eco-anxiety. With the important and frightening models as the main news headline, the scale of the problem can seem insurmountable.

But part of the issue of climate change is limiting the conversation to just the most gut-wrenching predictions. In order to make things better we also need to be talking more about solutions, systemic changes, and how we got to where we are today - which is what this course is all about.

Richard Wolfson guides the listener through how our understanding of climate change came to be. He talks about how we measure the temperature of something as enormous as a planet, and how we look at data correlations for clues. He illustrates how the different parts of the atmosphere interact with sunlight, and why CO2 is so common a byproduct of energy and manufacturing.

He mostly succeeds at trying to refrain from policy decisions in this course, which I think is a smart move. We need policy decisions for sure, but they're emotionally charged - which can encourage people to fall back more on their biases and assumptions as they feel threatened. Instead, focusing mostly on the science, this course gives us a crucial shared background knowledge to start having those informed policy discussions among our communities.

It is a great course indeed

Pure education, pure science, and the Professor makes clear distinctions when he deviates.

The professor voice is authentic and excellent.

If you want to know about Climate Change from a physics guy, here you go. You don't need a journalist to interpret this for you. Dr Wolfson is talented to speak for himself.

Was disappointed when Figure 1 turned out to be quite like Michael Mann's now fraudulent and discredited "Hockey Stick" graph. Mann fudged data to show a sudden temperature rise in support of AGW. This oft exhibited graph is stunning in its depiction of AGW and the the effects on Earth's temperature. Unfortunately, the study of climate involves more than a mere 160 years and manipulation of data.

I strongly suggest listening to "How to Lie with Statistics" By: Darrell Huff to get an idea how a picture can misrepresent thousands of number.

Very informative, easy to understand. Excellent course that is well worth taking the time to listen to. Really enjoyed this course.

Every new book, actually lecture I take from the series GREAT COURSES, I become more fascinated and motivated for learning more.

Full of scientific details and information

This audiobook presents all the evidence on how it is that we know that the earth is warming at an alarming rate and how we can track these changes to the way we produce energy. We mainly produce energy by burning fossil fuels and its greenhouse byproducts are linked and correlated to climate change.