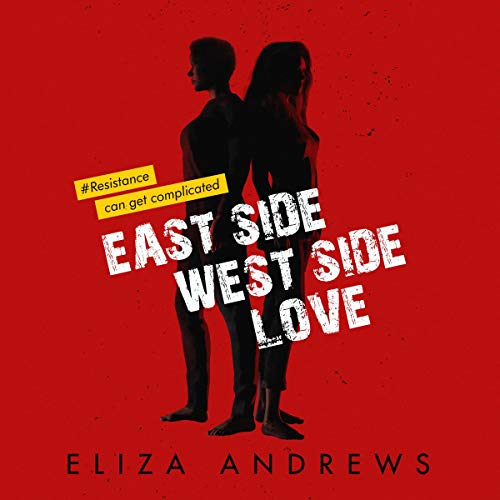 From the outside, Kasey James had the perfect life. She had a rich husband, two perfect kids, and a big house in Eastside with a pool in the backyard. None of her friends understand why she left her husband and went back to a stressful job teaching high school. She knows they’ll understand even less when she tells them she’s started dating a woman from Westside.

If she tells them, that is. After all, Kasey has her kids to think of, not to mention the upcoming school board election. What if her neighbors withdraw their support when they find out she’s seeing a woman?

Drea Robbins has a good life, too. She owns her own home and operates her own business, making enough money doing what she loves that she can support her mom, sister, and niece. She wishes she had a “special someone” in her life, but in the grand scheme of things, being single isn’t that big of a deal.

Kasey James, a white woman living in Eastside, is the absolute last person Drea expects to fall for. Kasey’s recently divorced from a man, she’s got two kids, she lives in the middle of rich suburbia - to say her lifestyle is different from Drea's would be the understatement of the year. But it’s like Drea’s mom says - we can’t control whom we fall for, and whether Drea likes it or not, she’s falling for Kasey. Hard.

But when a real estate development controversy puts Drea and Kasey on opposite sides of a battle line, will their new love prove strong enough to survive? Or is it just unrealistic for two women with so many differences to find a common ground they can hold against all the world’s pressures?

Eastside / Westside / Love is a story about race, class, gentrification, and inequality. But more than that, it’s a story about hope, and about finding out that what brings us together is stronger than what pulls us apart.

Not my favorite romance but an excellent story

I love the author and have read/listened to most of her other works. I only waited so long for this one because of the low number of reviews. Tbh I was worried for nothing, an excellent writer is still an excellent writer whether many people read their work or not. My only complaint is that the romance felt a bit forced at times. I honestly was rooting against the couple for the entire second half of the book because Casey was so frustratingly selfish in her relationship with Drea. The way it ended was really great though and the entire story kept me on the edge of my seat. I have no regrets.

An Easy Yet Engaging Listen!

Eastside Westside Love is a love story which explores the complexity of race, gentrification and social class and then balances them against the powers of love, fear and tolerance. The characters are engaging and extremely, flawed, which is what being human is all about. This is what makes the story so darn good! The book was a fast listen, yet the story never got away from me. The subject matter that the book deals with is totally relatable, as it is of concern to many people in our extremely diverse world.

It seemed like Kasey and Drea had too many obstacles, but they make it work. Kasey seemed like too stubborn to see Drea's viewpoint (or anyone else's), but at the end things work out, with a stronger relationship.

I requested this audiobook from Audiobooks Unleashed and have voluntarily left this honest review.

this is a beautiful love story and definitely reflects a lot of struggles that people in relationships, especially lesbians go through on a quest for self-acceptance and happiness. also, if you happen to be a history teacher, you will especially appreciate some of the nuances of one of the main characters and what she's struggling with in this book. It's also a great story of getting involved in local government and/or grassroots organizing.

Eliza Andrews brings very diverse characters together in Eastside / Westside / Love. Enveloped in community politics, this book highlights the differences, as well as, similarities in Kasey’s and Drea’s lives. In their journey of love, the similarities and shared goals become more apparent. Wonderful narration by Tasha Sade Thomas.

This was a different excellent book

When together with the love story there is some social drama it makes the book a great book. And this one is one of those.
Well written well narrated. A pleasure.

This Eliza Andrews book was engaging on many levels. The story about Kasey, a white divorced woman struggling with guilt over her divorce and how it has affected her children and ex-husband. And it is about Drea, a black, business woman, who has endured many personal hardships. Together they face issues of race, politics, socio-economic differences, and community strength. The story was written well and the characters fully developed. And yes there is some good steam in this story too. The narrator, Tashi Sade Thomas is new to me, but did a fantastic job of portraying multiple characters. Her narration, and a great story, make this a gem. Read it!