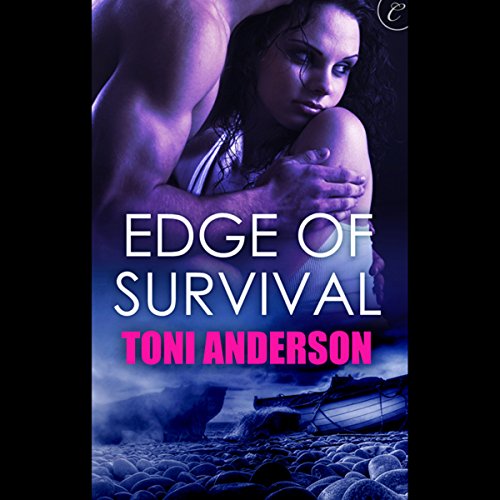 Written by: Toni Anderson
Narrated by: Lauren Fortgang
Try for $0.00

Dr. Cameran Young knew her assignment wouldn't be easy. As lead biologist on the Environment Impact Assessment team, her findings would determine the future of a large mining project in the northern Canadian bush. She expected rough conditions and hostile miners... but she didn't expect to find a dead body her first day on the job.

Former SAS Sergeant Daniel Fox forged a career as a helicopter pilot, working as far from the rest of the human race as possible. The thrill of flying makes his civilian life bearable, and he lives by his mantra: don't get involved. But when he's charged with transporting the biologist to her research vessel, he can't help but get involved in the murder investigation... and with Cameran, who awakens emotions he's desperate to suppress.

In the harsh and rugged wilderness, Daniel and Cameran must battle their intense and growing attraction while keeping ahead of a killer who will stop at nothing to silence her.

What listeners say about Edge of Survival

I really enjoyed this story. Lots of action, some intrigued and a classic whodunit. Not only that but the Royal Canadian Mounties were involved. Always had a thing for the guys in red. (now females are in their corps also) The story revolves around a female icthyologist/biologist and her environmental study and a mining company that tries to thwart her, and a helio pilot who is the hero, with a questionable past adds more intrigue to this story.
Definitely worth a credit.
Lauren Fortgang did an excellent job with the Narration.

Nice read with an interesting twist

This was a great one to listen to the author doesn’t give much away as she tells a story of who killed and why. You will have to pay close attention and you still might miss the hints of who the killer really is. Toni had me guessing almost until the end, I would make up my mind and then change it again time after time. I would have to say it isn’t my favorite book by her but it is a 5 star listen.

Toni does touch on some every day issues which made this story very believable as she spins a tale of who did it and why. The book starts off a little slow for me but before long Toni pulls me right in and hooks me. It was an audio I didn’t want to put down I just had to know why they killed. The unknown of what he was hunting about drove me crazy.

Lauren Fortgang did a wonderful job of narrating as she put the voice to each character I would have to say my favorite was Daniel Fox with his cool sexy voice as he keep his head cool which drives more than one women crazy he is a hot little number who could make you want him from one look. I enjoy how he played Cameran trying to make you stay away from him. The lake scene was outstanding as the narrator talked I could picture the scene in my mind which had me chuckling.

Toni does give a great plot which isn’t one you will see right away, she keeps you guessing as to whom and why in more ways than one. As they close in on the killer it all comes very clear which adds to the mystery. Toni gives you wonderful supporting characters I have to say I didn’t care to much for Vicki right off but she did grow on me. It was nice to see her grow and become a wonderful lady.

Cameran and Daniel don’t hit it off but you can feel the pull of these two and know things are going to get hot and heavy. Both are trying to outrun their past but in different ways, both have so much to give but neither is willing to put their heart on the line. There are some wonderful passionate scenes with some hot nights as these two dance around each other.

I totally enjoyed it as Toni gives us another site to her writing. It is a little confusing at times the author isn’t giving much away in this read but the author does come through. It is more of a mystery than a suspense I think which is well worth the listen. There hasn’t been one of Toni’s books I haven’t enjoyed she is a wonderful author who knows how to draw you in as she gives compelling reads. If you haven’t read any of her work I would start with the Cold Justice series, the audios are outstanding as she starts the story off with a bang and keeps you on the edge of your seats. All her audios are outstanding with wonderful narrators.

What disappointed you about Edge of Survival?

It is very hard to follow....and not interesting enough to keep trying. I am half way through and have given up on it. I don't care enough for the characters to bother. The tedious obsessiveness of the male lead character got on my nerves. The best I can tell, he is supposedly drawn to main female lead, but has only managed to have sex with a secondary character...not my favorite premise for leading characters in a romantic suspense. As for the suspense plot.....not much of one to tell. And what's up with the equally neurotic/depressing detective investigating. Yikes these characters are boring and seemed to be obsessed with sex. I like a good steamy book - but this is like reading a sex therapy manual - LOL! I have read this author before and enjoyed her cohesive interesting stories - but she sure missed the boat with this one.

What could Toni Anderson have done to make this a more enjoyable book for you?

Would you be willing to try another one of Lauren Fortgang’s performances?

Yes - she did a good job with the material that she had.

What character would you cut from Edge of Survival?

The secondary female lead who seemed to be a sex addict/skank...so boring I can't remember her name.

I love Toni Anderson's books and really enjoyed listening to this one. It's not my favorite of hers, but still a worthy listen!

Really enjoyed the whole thing. I would definitely read other books by this author in the future.

Broken ppl who heal each other

Good story, albeit a bit slow until 3/4 way through. Daniel Fox suffers with PTSD and has a lot of baggage from his days as a British special forces soldier. He spends his time as a helo pilot...and drinking. He shouldn’t be attracted to the scientist who is tagging fish...Cam lives her job researching fish and their migratory patterns. Her latest project is in the middle of nowhere and should be a quiet gig. Imagine her horror when she discovers the body of a murdered woman in the local pub’s bathroom. Then there’s the attractive but maddening helo pilot, whom she will not fall for...after all, her track record with men isn’t good. Between poachers and a killer on the loose, Daniel and Cam have lots to navigate...will they get out alive?

Not what I expected and not in a good way

I have quite a few books by this author in my library. This is probably the earliest of her books for me so maybe that explains why I disliked it. The main character was barely tolerable and helpless and irresponsible. Not that I need female empowerment in every strep but I find it hard to believe she could be so dense. This writing was sub par for me. Lots of repetition and lame characters that were barely flushed out. Had I listened to this first I would have never read more of her books. This would needs to go to the virtual shredder.

Not her best but good

I typically really enjoy Toni Anderson's stories but wasn't super impressed with this. It's my least favorite so far. It's still alright and hits a nice tone...not too grim or too fluffy...but the Cold Justice series is great. Also, the reader's non-standard Americanish accents are awful and jarring. . .

Finally, I'd love to read a romantic thriller that didn't end in declarations of always having loved someone known for two weeks, or vows of imminent marriage and babies. Romance can be passionate and substantial without such nonsense.

The 'Edge of My Seat' Good

This book is so full of twists and turns I felt like I was on a non-stop jet ride going mach 2. I loved the thrill of it all. Along with the suspense surrounding murder in a small town was the incredible love story of one less than extraordinary man and one exceptional woman. There was no lull in this listen. My ears were held captive by every word.
Daniel is wrestling against his past when Cameron, with her life challenges and lust for living, comes into his world. He works hard to resist her pull even as he fights to keep her alive. One of my favorite lines in a very long time is whispered at the end of this book and I know I am not alone. It is only the cherry on top of this incredibly satisfying read.
Lauren Fortgang's narration of this book took it to the next level. Her voices of the characters were clear and pulled me in even more. If I could given Toni and Lauren 10 stars for this book, I would have.