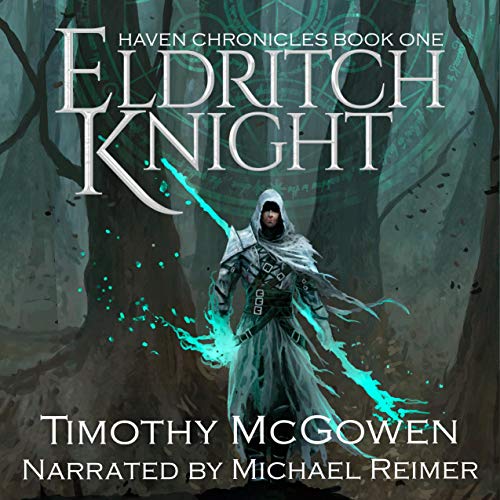 Written by: Timothy McGowen
Narrated by: Michael Reimer
Try for $0.00

The Earth on the brink of destruction. A new world of magic and danger! Can Phil stay alive long enough to enjoy his escape from destruction?

The world is ending.

Yet in the midst of its destruction, there's Haven, an escape from the pending doom. Unfortunately, this doesn't include Phil. After losing his sister, he's miserable and just looking to survive. When he illegally finds a way into Haven, he discovers it's a world that's unlike anything he's seen before. Haven is alluring and constantly changing. But it's also dangerous, and Phil soon realizes there's someone who wants him dead.

In exchange for his safety, Phil makes a bargain to retrieve a magical item located somewhere in a deep forgotten forest. But time is running out, and if he doesn't find it in time, his death is guaranteed.

What listeners say about Eldritch Knight

This book took a while for the main character to put on his big boy pants and grow a pair, even then it was hard to cheer for him, he was over reliant on others and the power. It was hard to listen to.

The narrator was ok.

I appreciated the time and effort spent in developing the real world setting. I feel like a lot of books in this genre try to get to the game world as quickly as possible. The game world her is quite unique and light on the crunch. I am interested in seeing what happens next in this series. The narration was very well done. Reimer does an excellent job giving the characters a voice.

better than what I expected

I love medieval times books. When this book first started it did not sound like it would be in that time period. However that quickly changed not too far in and I was hooked from that point on. the narrator did the book justice and it was over before I expected it to be. I do not know when the next books will come out but I definitely will get them when they do

This book was a little slow to start, but didn't take long to have me completely wrapped.

I wanted to love this book but I find that I am conflicted because I didn’t like the MC. Overall, the book was entertaining. But the dang MC is not very likable. This is my opinions.

Did not meet expectations

Warning, minor SPOILERS. Read only the TLDR if you want to avoid them.

TLDR:
Pretty unremarkable all around. Few good concepts/ideas. "Game World" doesn't feel like a game world (no stat screens, menus, inventory, etc.). In hindsight, not worth the credit.

SPOILERS below, read at your own risk!

Only on Chapter 25 and felt like I had to leave a review now. If anything wildly significant changes, I'll change my review and rating (thought I doubt that will happen). Between the pretty slick cover, the exciting summary, and all of the glowing reviews I was excited to check this out.

I enjoyed the extra time spent in the real world at the beginning, as a lot of books in this genre (or anime in the somewhat similar isekai genre) tend to rush to the game/alternate world and forget/neglect the real world entirely.

I enjoyed that even though it's a VRMMO-style world, the MC has to gain entry to the world through unconventional means.

I enjoyed that the MC (so far) is pretty balanced (well okay, actually incredibly weak at the beginning, though he has grown some so far) and NOT instantly "The Chosen One" overpowered self-insert titan with no effort.

I enjoyed that (so far) there has NOT been any ham-fisted or lewd romance, or that female characters fall head-over-heel at the mere presence of the MC.

I enjoyed that, as far as I have noticed while passively listening so far, the author does not fluff his word count by repeating the same concept in a different way multiple times or bring up the same description every other chapter.

Like another reviewer mentioned, it felt like the narrator was just going through the motions and somewhat speed-running the book. There were a few good voices that they did, but otherwise the performance fell mostly flat. They were clear and easy to understand, however, and I have no complaints regarding sound quality or sound levels. They sounded consistent throughout what I've listened to so far.

Unfortunately, the story does not seem to have a whole lot of structure. We start with the MC losing his sister to an illness, and we find out they had, along with a group of others, been planning to hack their way into this "game world" because the world was about to end from an incoming meteor. As far as we know, (so far), only the MC makes it into the "game world" despite various roadbumps/conflicts along the way. As soon as he is in the "game world" though, the people who were originally pursuing the MC is never heard from again.

I have been putting "game world" in quotes because (so far) there has not really been much at all in the way of showing that this is a virtual world. No stats. No menu screens. No Graphic User Interface of any kind. Abilities/Special Attacks don't have proper names. No experience points. No inter-dimensional inventory. None of it. I would say this feels more like a portal fantasy, but with how readily the MC adapts to the new world and how little the real world is even mentioned, this could easily be a generic fantasy.

Next, by the time I was halfway through the book I found I was asking myself, "Why is the MC doing any of this? What is the end-goal?". There is no real video game-like quest system in place, so that's not driving the character. The motivation, as far as I can recall from the beginning of the book, was simply to *get into* the game, but not a whole lot beyond that. Basically events happen which force the MC to sort of go along for the ride (so sort of a lack of agency). There is a sort of turning point where the character chooses all on their own a plan of action with no prompting, nudging, or outside force telling them to do so, but it takes forever to get there. Even then however, the goal the MC goes after is a fairly immediate small-picture goal.

To the author and narrator: I don't mean to be overly harsh with my criticism, but hopefully it can be used to help you reflect and consider including some practices to improve your craft. With some more practice, experience, and refining, I'm sure the both of you can produce much greater quality work.

To readers considering this book. If you're looking for a typical LitRPG, I would say avoid this title for now, but keep an eye on this author. If you just want a fairly basic fantasy, if it's on sale, go for it.

Narrator seemed to have no life in him while narrating story It was as if he was just going through the motions of reading the words. The MC is just an idiot, Constantly going on about how he can't trust anybody baby doesn't know anything but makes no effort to learn anything. His companion obviously has obviously has duality in his purpose yet the MC is too blind to see it. Refuses refuses to listen to his "master" Whom he sought out for training But will trust some unknown wizard or no wizard or whatever the hell he is since since titles and descriptions keep changing constantly. There's no question what's the weather about anything he does blindly accept it yet yet then complains he doesn't know who to trust or what he should do. Even the so called wizard has obvious duplicity that causes the MC to hesitate and yet still the MC just follows him blindly.

I enjoyed this book, it drew me in very quickly. the detailing is superb as is the depth. The characters are great fitting in perfectly with the story being told. its a great adventure.
The narration is great, making the experience all the more enjoyable.
I wouldn't hesitate to recommend this book to anyone.

GOOD START TO A SERIES.CANT WAIT TO READ MORE!

ELDRITCH KNIGHT BY TIMOTHY MCGOWEN AND NARRATED BY MICHAEL REIMER is the first in the Haven Chronicles.

If you are into the medieval/fantasy/genre the Haven Chronicles are for you.
Phil has not only just lost his sister,but Earth is on the brink of being destroyed. Phil, wanting to get away from Earth is "transported" to Haven and Haven aint all its cracked up to be! Phil lands into medieval times and is forced to become a knight , a terrible knight. He is set upon a quest and must learn not only to conform to the time and place but to battle evil beasts and retrieve a magical item.

Not bad for the start of a series. I do like the characters Phil comes across. Mr.McGowen has put together a world that could , given more development of the characters,become a must read series.
I listened to the audio version and the narration by Michael Reimer is really good a helps make the story

I recieved this audiobook free in exchange for an honest review.

An amazing, but different take on magic and adventure! I highly recommend giving it a read!

This was quite the story. I was expecting a bit more human sacrifice, but was pleasantly surprised. I’d like more details on how the magic functions, but that’s what future books are for!!!