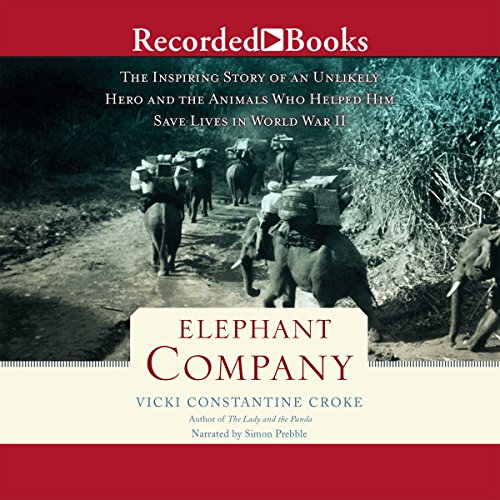 J. H. "Billy" Williams always had an affinity for animals. So, when he responded to a job offer with the East India Company to work with logging elephants his family wasn't surprised, though they were worried. He had already come back from World War I in one piece; would he be so lucky with India? Not only did he find his calling with the elephants in India, Billy and his elephants became war heroes.

At the onset of World War II, Williams formed Elephant Company and was instrumental in defeating the Japanese in Burma and saving refugees, including on his own "Hannibal Trek". Billy Williams became a media sensation during the war, telling reporters that the elephants did more for him than he was ever able to do for them, but his story has since been forgotten. Part biography, part war story, and part wildlife adventure, Croke delivers an utterly charming narrative and an important, little-known piece of the legacy of World War II. Vicki Constantine Croke has been covering pets and wildlife for more than two decades. She has anchored NECN-TV's The Secret Life of Animals and wrote the Boston Globe's "Animal Beat" column for 13 years.

What listeners say about Elephant Company

Story of Friendship, Loyalty, and Bravery

Croke tells the story as if it comes naturally, and she recalls Williams’s tale like it happened yesterday. The book captured my interest from the start, with Williams being atop his favorite elephant while battling severe sickness. It's not a suspenseful tale, but the descriptions of the jungle and the extremes of life that entails with it are enough to maintain curiosity. Some fascinating facts about elephants are also revealed, such as the sense of smell can be 5 times stronger than a bloodhound.

There's not as much emphasis on the WW2 events as I expected. This shouldn't detract the reader though, it's still worth reading.

Overall: This is a good uplifting read.The narrator was great and fit the part perfect. I recommend not so much for WW2 buffs, but more for a good story involving elephants and a man who cared deeply for them.

If this review helped you, please click the button below...thanks.

Learned a great deal about elephants

If you could sum up Elephant Company in three words, what would they be?

It was interesting to follow Jim from his early years with elephants where he was just discovering them up to the point where his is an expert. Amazing journey.

The story about the blind and her son... so heartbreaking but makes you realize how smart these animals are.

I have a new respect for these creatures. I really recommend this book. As others have stated, only the last part is really about WWII but that didn't really affect my opinion about the book.

Jim Williams was undoubtedly a kind and remarkable man who cared about elephants, but even with his reforms and guidance, Elephant Company can be a difficult story to love simply because of its exploitation of elephants for the benefit of British colonial teak companies. I felt as though I held my breath all the way through this book. There are beautiful passages and the story is well written. I found the subtitle a bid misleading because the war only begins 70% of the way into the book. That is why I gave it a four. With all its tense moments and questionable treatment, I do feel that we would all be terribly deprived not to have ever known the magnificent elephant Bandula. There are invaluable lessons about our relationship with animals, and there are questions about how fair we are to working animals. Needless to say, the last 1/2 hour of the book brought a flood of tears and a feeling of great loss in many ways. The narrator is remarkable.

This is a rare audiobook - this tale of a little-known episode from history, expertly written by Vicki Croke and masterfully performed by Simon Prebble. I've listened to hundreds of audiobooks, and not one in 10 is as good as "Elephant Company."

Although the title is misleading (the war doesn't enter the picture until the last third of the book), "Elephant Company" is, nevertheless, a fascinating account of one man's extraordinary relationship with the working elephants of Burma. It's an audiobook I couldn't stop listening to and one that I hated to see come to an end.

A wonderful book about magnificent beasts.

The greatness of this audio book is not in the writing or narration. Both are adequate but not noteworthy. The real beauty lies in the subject(s) - the elephants. In a way, this ends up being a love story to them.

Though I've always wanted to know an elephant personally, I likely never will. This gave me a glimpse of what that might be like. I was impressed, once again, by their intelligence, uniqueness, and bravery. Again, as with many other books, it filled in a piece of WWII history that was new to me.

It's interesting to see where events have taken people in life - especially during the first half of the 20th century. I don't think anyone could have predicted how Billy Williams' decision to become a teak man in Burma would actually turn out or what a difference he might make. By virtue of place, the book shines some light on British colonialism - and it's not pretty.

This is a lovely look at what happens when people have a passion and heart. And though that's interesting, for me the unforgettable stars of this book are really the elephants themselves. Here's to you, Bandoola.

when men were men

I loved this story. on every page love. passion and the commitment of one's entire being to those loved and passions. narration very well done and a wonderfully talented written account.

This is a fascinating story. I can highly recommend this book. I not only learned more about the days of the British Empire in Burma but also about WWII in Burma under the Japanese rule. The special treat for me was the vast knowledge about the Indian Elephant that was provided.

This is the story of J. H. “Billy” Williams. Williams fought in WWI and like many men returning from the war he was restless. He was hired by the Bombay-Burma Teak Company and went off to the jungles of Burma. He ended up spending his life work as a forest manager and responsible for the care of the company elephants. Williams developed a new method of training the elephants. He wrote a report to the head office showing it was costing more money to capture and break wild elephants than if they kept and trained the baby elephants born to the company elephants. He did not like the method used to train the wild elephants called Kheddaning which destroyed their spirit and left them with brutal scars that often got infected. Williams created a school which had the mother train the babies starting at age five. He also had twelve year old boys teamed up with the elephant to be trained as a Uris. The boy and elephant would spend the rest of their lives together working in the jungle. During WWII Williams and his elephants helped build bridges and created a path through virgin jungle as he led his elephants and refugees fleeing from the Japanese occupation to the safety of India. When he had his family safe in India, Williams returned to help the British Army fight the Japanese by building bridges and roads, at his peak he had over a 1000 elephants under his command.

I thought it was great that Williams met an English woman, Susan, in the jungle of Burma and she also had a special gift with animals, of course, they married and she lived and traveled with him in the jungle on his rounds as the forest manager. Williams had to learn the Burmese language not only to communicate with the workers but also with the elephants. The elephants apparently had quite an extensive list of Burmese words they knew.

Croke did extensive research and had access to Williams’ diaries and other papers as well as unpublished manuscripts and essays. The book is well written. In spite of the title this book is really about the life and work of the elephant. I noted that the book was published by Recorded Books; they always put out a high quality book. It was so great to listen to the great Simon Prebble narrate the book. It has been some time since I have listen to him.

Very informative and entertaining. A great historical tale. Couldn't put this book down. My wife had a similar reaction. Thanks

Exceptional in every way. Historically invaluable, the narrator is excellent, and the author has done a remarkable job pulling it all together to be told!

I really enjoyed this book. I learned about elephants and some history I never knew about WWII. Highly recommended!