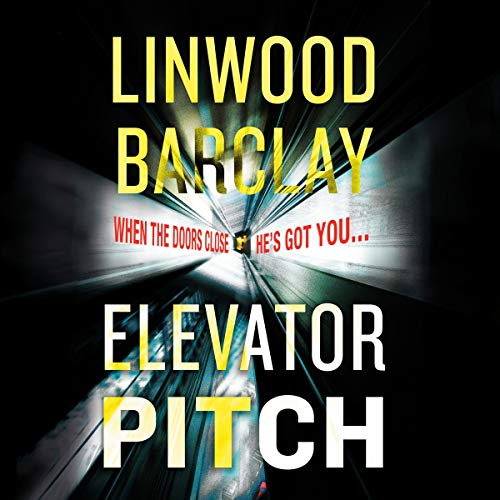 Written by: Linwood Barclay
Narrated by: Jonathan Maclean
Try for $0.00

The number one best-selling Linwood Barclay returns with an edge-of-your-seat thriller that does for elevators what Psycho did for showers and Jaws did for the beach - a heart-pounding tale of terror and menace that will make you think twice the next time you hit up.

It all begins on a Monday, when four people board an elevator in a Manhattan ofﬁce tower. Each presses a button for their ﬂoor, but the elevator proceeds, nonstop, to the top. Once there, it pauses for a few seconds, but the doors don't open. Instead, the elevator begins to descend ﬂoor-by-ﬂoor. Then it plummets. Right to the bottom of the shaft.

It appears to be a random accident.... But on Tuesday, it happens again, in a different Manhattan skyscraper. And then Wednesday brings yet another tragic high-rise catastrophe. In only three days, one of the most vertical cities in the world - and the nation's capital of media, ﬁnance, and entertainment - is plunged into chaos. Clearly, this is anything but random. This is a cold, calculated bid to terrorize the city. And it's succeeding. Fearing for their lives, thousands of men and women working in offices across the city refuse to leave their homes. Commerce has slowed to a trickle. Emergency calls to the top ﬂoors of apartment towers go unanswered. Who is behind this? Why are they doing it? Are these deadly acts of sabotage somehow connected to a ﬁngerless body found on the High Line?

Two seasoned New York detectives and a straight-shooting journalist race against time to uncover the truth before the city's newest, and tallest, residential tower has its ribbon-cutting on Friday night. With each diabolical twist, Linwood Barclay ratchets up the tension, building to a shattering finale. Elevator Pitch is a riveting tale of psychological suspense that is all too plausible...and will chill you to the bone.

"Read Elevator Pitch as soon as possible. It's one hell of a suspense novel." (Stephen King)

"This novel moves as fast as a falling elevator and hits with just as much force. Linwood Barclay is a stone cold pro and Elevator Pitch is a shameless good time." (Joe Hill, number-one New York Times best-selling author of The Fireman and Strange Weather)

"Elevator Pitch is a white-knuckle ride of a book with twists on every level." (Gilly Macmillan, New York Times best-selling author of What She Knew)

What listeners say about Elevator Pitch

Asked for a Refund

I own over 400 audio book -90% Detective and Mystery, and I am very patient in allowing the author to develop their story. But after almost two hours of listening, I had had enough. Too many sub plots, cliched characters, and stereotypes. The good thing is I risked nothing by giving this book a try. Thank goodness for Audibles refund policy.

This book is unbelievably bad

I restarted this book 5 times and still couldn’t get what it was all about, seemed to be a bunch of short stories, really bad. I have all of Linwood Barclays books either for kindle or audible, I really enjoy this author,but my goodness this book was terrible.

The story isn't all that captivating, but decent. I expected more thrill but that wasn't the case. The reader was rather awkward. His voices didn't seem consistent and at times were just weird, and he enunciated odd words.

A few shocks and twists, never quite sure what was going to happen next. Easy to listen and just not stop till the finish

This is my first audio book I’ve listened to and I love Linwood Barclay’s books so it was a little different hearing it through someone else. I didn’t care for the narrator. His character voices were annoying. As for the story itself it’s not one of his better books but it was alright.

The narrator was HORRIBLE. I will never listen to him again. Struggled to listen through.

Some voices too soft

I understand the “performance” part of the reading, but when one of your characters speaks only in soft almost whispers, I can’t hear it in the car or the subway and always have to stop and go back. Which is tough when driving.