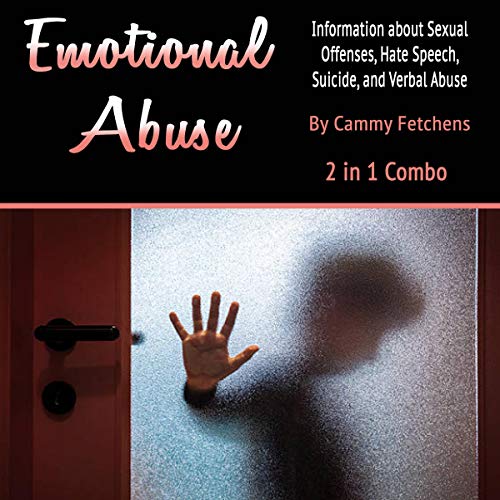 Written by: Cammy Fetchens
Narrated by: James Taylor
Try for $0.00

This audiobook consists of two books that cover topics such as sexual abuse, suicide, verbal abuse, bullying, and human trafficking.

Here is some more information about the two books.

What does sexual abuse involve?

We may not always want to think about it, and some people shiver at the thought of it, but sexual abuse is common and, sadly, rampant across the world. Some things happen behind closed doors, others get recorded and openly displayed to any pervert on the web who is looking for it.

In this book, we’ll cover important related topics to increase your understanding of this phenomenon. We’ll go over things, like:

I am sure you take this topic as serious as I, the author, and that you want to know, at least to some degree, what’s going on in the world. Don’t be an ostrich. Don’t stick your head in the sand. Learn the truth and become cautious and aware accordingly.

Verbal abuse basically means putting other people down. It can be through gossip, belittling comments, or bullying. I think most people are at least guilty of a little slander or unjustified, harsh criticism that have given others. But in its extremity, it can cause some serious issues, including depression, suicide, vengeance, and more.

Smear campaigns, the drama triangle, manipulation - these will be the topics of this book, along with an extensive study of the causes and consequences of suicide. The most important factors that contribute to a depression or addiction are laid out, and much, much more.

If you want to learn more about these topics, if this is your cup of tea, then don’t wait to get started with this book!

What listeners say about Emotional Abuse: 2 in 1 Combo

It's so good that my puppy gave it 5 stars as well. It's a great thing if you are able to simply put on your headphones and listen to an audiobook like this one. I wish I was truly good at writing customer reviews, but you'll simply have to be satisfied with this mediocre suggestion, namely, that the book was interesting all the way through, till the very end.

Hi there, I simply intended to publish a few...

Hi there, I simply intended to publish a few sentences of endorsement. It appears as if we are dealing with a pro here. The narrator's production was to die for. In my point of view, it was quite perfect. There might perhaps have been a couple of hardly detectable errors in there, but they did not trouble me. When you can listen to a storyteller who is this great, and about a concept that you're interested in, you do not care about the other parts. That's the end of the story.

It's so good that my canary gave it 5 stars as well. If I would need to outline it, it would be simply in a single word: Terrific! This deserved my time. Lastly, a book that gives you what you want. Another detail: The storyteller appeared to be so good that I would most likely listen to it in the future. Maybe even more than once. I cannot recall every single thing that's being said in all these books, so it would be worth reminding me of what was being mentioned.

This customer review mirrors my personal...

This customer review mirrors my personal honest opinions and preferences. I have no complaints about this particular audiobook. I do not believe the word "awesome" does this book justice. There has to be a much better word, and I will certainly keep searching, since it deserves something great to be said about it.

There are so many aspects I loved ...

There are so many aspects I loved about this audio book, but I can only write so much. 5 stars! By far the greatest thing that's happened to me this week. I had the ability to comprehend every thing clearly, not even if the storyteller said the terms properly, but also since the info in it included new things to be learned.

I enjoyed this particular subject, so I got...

I enjoyed this particular subject, so I got this book. I am trying to say one thing bad about this book, but I can't. It's simply too great. So without further exaggeration, I simply believe everybody needs to think about listening to it. I did not stop listening till the end. That's how much I appreciated it. I was happy to hear the proper pronunciation of all the words by a competent audio book producer.

Fantastic! Have you ever listened to a book...

Fantastic! Have you ever listened to a book like this? Unbelievably good. That's what I think. The pronunciation of the words in this particular audiobook was fantastic, in addition to all the info contained in it. Based upon that, I am really glad that I purchased the book. It was actually worth my time.

This audiobook blew my mind, both the...

This audiobook blew my mind, both the material and the narrator's performance. I almost skipped this book, but I am happy that I checked it out anyway. It makes sense what the writer says, especially in the last few chapters, in which the matter becomes a conclusion. Let me think for a minute ... how should I explain this? It was expert, uncomplicated, and reasonable. With that being stated, yep, I do highly endorse this. No doubt about it.

I just wanted to write something positive about...

I just wanted to write something positive about this particular book. I was truly surprised. And I don't always say that about any audiobook. This was really worth my time. Finally, a narrated book that gives you what you want. One more detail: The storyteller appeared to be so good that I would certainly listen to it again. Maybe even more than once. I cannot recall every single thing that's being stated in all these books, so it would be worth reminding myself of what was actually being mentioned.

This specific audiobook was definitely ...

This specific audiobook was definitely worth listening to, in my view. There are too many bad audiobooks in the market, but this is not one of them. Such an enjoyable idea. I believe I will let my siblings spouse listen to it. They have to know that there are audio books like these in the market.