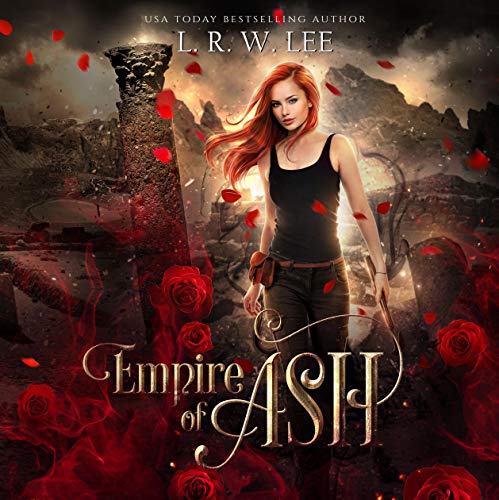 Archaeologist Pellucid Rose discovers the find of the century when an earthquake hits her Mycenae, Greece dig. But before she can claim it, a dark, dangerous, and very sexy stranger steps from a swirl of shadows, claiming she’s loosed a sphinx on the world by translating an ancient secret on one of the scrolls.

What’s more, he insists Secret Magic requires her to go with him to capture the ferocious creature.

Against better judgment, Pell teams up with the hot stranger to discover a world of magic where the impossible is reality, crooked mortals hide corrupt secrets, and mysteries older than myth can kill you. That thought alone makes her heart race, but things get even worse when she discovers he’s hiding world-altering secrets, and only she has what it takes to stop him.

What listeners say about Empire of Ash

Just when you think it's over

So many things happen in the book from the adventure to the mythological creatures to the God's to the many kept secrets and so much more. I was hooked from start to finish wanting to know everything Pal did and feeling like I learned so much. There was a lot of information in this book, too much for me to retain, that it still fascinated me as to how much I still didn't know but that I was curious to see how everything was connected. Archeology has always been a mystery to me and I wondered the stories behind it. this was an insight. Anyway, these two characters are amazing. Their first one is over so quick that you wonder how there is more to the story, but their adventures continue along with their banter, her growing desire, and his secrecy. It's worth the listen and leaves you wanting to know what adventures await in book 2.

This narrator was new to me but she was great. She gave each character their own personality and, when needed, an accent. you could tell who was talking and even new characters had their own uniqueness. I enjoyed her and look forward to her work in the future.

Pellucid Rose is a devoted archaeologist on a dig in Greece, when she finds what appears to be an ancient antiquity. She excitedly translates the hieroglyphics and unleashes a sphinx onto the world. Black smoke surrounds her and a very handsome, mysterious man appears. He is a calming influence on Pell and he begins to tell his story. First, he informs Pell that, since she is responsible for the sphinx's release into the world, she's the one who has to recapture it and take it back where it belongs. It's a dangerous mission and Pell comes to understand that there are more secrets than she could ever expect. She still doesn't know who he is and gives him names like Mr. Cocky Pants, Crazy Guy, but it's really Harpoc and he's the god of secrets. As they travel around the globe, recovering and replacing secrets, there's an attraction brewing between Harpoc and Pell that is sweet and still mysterious. I got a little annoyed with Pell's inner voice, especially when she whined or shouted over Pell. And I didn't like the addition of the messed up world and the corrupt politicians. It came up at the beginning and it was still a major point at the end. I want to be immersed in a fantasy, especially one that is woven this well. Pell and Harpoc are wonderfully fleshed out and have personalities that jump off the page. They're secretive and and amusing as they confront enemies who seek to destroy the god of secrets' power.
Sarah Kisko does an excellent job with the narration. The voices are clear and dynamic as she brings each character to life!

I have Never read or listened to this author before, got the book on Audible and listened to it there. Narrator was Excellent and brought the storyline to life. I found this Author's sense of humor so good, just a hoot!! The inner monologue Pell has throughout the book made me laugh more times then I can say. Pell the Main Character is quite a Character and she has the same deep streak of Curiositie as myself which just made me laugh all the more.
Highly recommended this Story and really want to listen to the 2nd book in this Series.

I love the snarky attitude that the narrator easily conveys through the use of her voice. Pal gets into various difficult situations throughout this book when her curiosity and intelligence get the better of her.

This is a new author and narrator to me. Love the character development and plot detail. Can't wait to see more work from them both.

Loved everything about this story. The concept of scrolls holding secrets that when read come to life was very clever. I love the banter between the two main characters. I still feel there is one secret about Pel that hopefully will come to light in book 2. Can’t wait to see if my hunch is right.

Who's the dark stranger?

I love archaeology, geography and history. Reading about a young female archaeologist was very interesting including the side bar discrimination she faces with a few colleagues. I want to listen to the rest of the series to see how Pell and the stranger flush things out between her discovery and their relationship. I did think there was a bit of a longer pause between chapters than I am used to, I kept thinking someone was calling me and interrupting the audiobook but it wouldn't prevent me from listening to the rest of the books.

Great start to a New Series

This book is about an archaeologist Pell who discovers a new find along with a few other additional unexpected things including a new character Harpoc after a tremor while on a dig. The finds lead her on some rather interesting adventures that will keep you riveted to the storyline wondering what both she and Harpoc are going to be doing next. The story has lots of intrigue along with providing some things to think about from an ethics and fairness perspective. This book does this in a great way without beating you over the head with it but does it in a way that just makes ne think about the issues - very well done. Loved the storyline and am looking forward to the next Book in this series.

New to me Author, looking forward to more stories from this author loved the world and character building.

Interesting start to a series

Great start to an intriguing storyline. The story is fast paced and well constructed. The characters are interesting and you want to root for them. I look forward to more entries in this series.