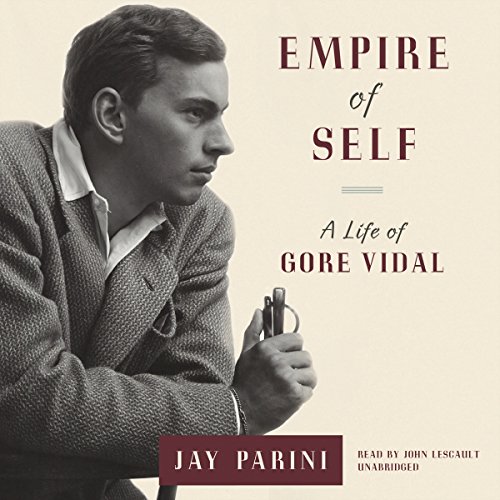 Written by: Jay Parini
Narrated by: John Lescault
Try for $0.00

An intimate, authorized, yet frank biography of Gore Vidal (1925-2012), one of the most accomplished, visible, and controversial American novelists and cultural figures of the past century.

The product of 30 years of friendship and conversation, Jay Parini's Empire of Self probes behind the glittering surface of Gore Vidal's colorful life to reveal the complex emotional and sexual truth underlying his celebrity-strewn life. But there is plenty of glittering surface as well - a virtual who's who of the American Century, from Eleanor Roosevelt and Amelia Earhart through the Kennedys, Princess Margaret, and the creme de la creme of Hollywood.

The life of Gore Vidal was an amazingly full one - full of colorful incident, famous people, and lasting achievements - that calls out for careful evocation and examination. Jay Parini crafts Vidal's life into an accessible, entertaining story that puts the experience of one of the great American figures of the postwar era into context, introduces the author and his works to a generation who may not know him, and looks behind the scenes at the man and his work in ways never possible before his death. Provided with unique access to Vidal's life and his papers, he excavates many buried skeletons yet never loses sight of his deep respect for Vidal and his astounding gifts. This is the biography Gore Vidal has long needed.

What listeners say about Empire of Self

Even as a child, I enjoyed watching Gore Vidal whenever he was on TV. His impatience with idiots mirrored my own. His dialog taught me a great lesson: Just because someone holds a lofty position, does not mean they earned it, nor your respect. I am glad that he lived long enough to put into words my own dismay for Bush and Cheney. Jay Parini has masterfully captured Vidal's personality and his squinty-eyed attitude toward the growing number idiots in the world. John Lescault's sensitive reading, with appropriate pauses, tones and inflection, made this book a joy to "read" while commuting to and from work. Best of all, I am looking forward to locating old video clips and copies of Vidal's essays.

I am from the Generation X period of Americanisms. Most of my fellow Gen-Xers are unfamiliar with Vidal's essays, books, plays, or even his epic life in the world of power players and Hollywood icons. There is a lot to learn and consider coming from Gore's insights, even when they are sometimes unpopular. The book is a semi descent introduction to Vidal, but I would mostly hope Gore's books of essays on America's political climate be their first stop in digesting the literary icon.Gore's prediction of the dismantling of America's Empire and the loss of the Republic is now coming to reality.

Vidal and his brilliant jester self.

The author does an almost cut and paste job of recanting Vidal's childhood, almost word for word from both of Gore's memoirs "Palimpsest" and "Point to Point Navigation" which I read prior to Parini's work. I am not sure if this is laziness on the author's part, failing to dig deeper into new stories of Gore's early upbringing. But it also may be that most of Gore's family and friends from his childhood years are deceased making it difficult to uncover new avenues to explore. Thankfully, that only accounts for 10% of the books content. What I did appreciate is Parini's critique and brief summary of most of Gore's novels and books. That feat in itself was a mountain to climb considering Vidal's long list of publications. Also, I appreciated Parnini's sharing of his own platonic relationship with Vidal, exposing a softer and more emotionally vulnerable side of Gore in his later years.

NO, but mostly I felt engaged enough to listen for long periods of an hour or so.

The United States of Amnesia...wake up!!

I gained a lot of onsite into the life of Vidal but the writing was almost to detailed at times. It might be that Vidal's life had that much going on. It was like he never stopped doing interesting things.

I enjoyed this! It told the story of a man who broke ground for the LQBTQ community, even if he didn't want to!