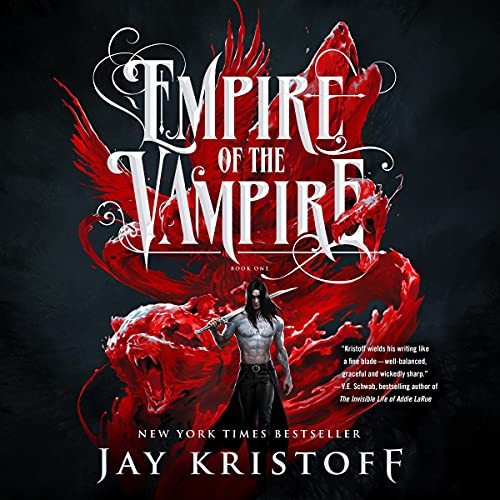 Empire of the Vampire

Written by: Jay Kristoff
Narrated by: Damian Lynch
Try for $0.00

And in the Seven Martyrs’ sight,

It has been 27 long years since the last sunrise. For nearly three decades, vampires have waged war against humanity; building their eternal empire even as they tear down our own. Now, only a few tiny sparks of light endure in a sea of darkness.

Gabriel de León is a silversaint: a member of a holy brotherhood dedicated to defending realm and church from the creatures of the night. But even the Silver Order could not stem the tide once daylight failed us, and now, only Gabriel remains.

Imprisoned by the very monsters he vowed to destroy, the last silversaint is forced to tell his story. A story of legendary battles and forbidden love, of faith lost and friendships won, of the Wars of the Blood and the Forever King and the quest for humanity’s last remaining hope: the Holy Grail.

“Brilliant and unputdownable, with tenderness and light bound into the bitterdark of a grim and fascinating world.” (Laini Taylor, New York Times best-selling author of Strange the Dreamer)

What listeners say about Empire of the Vampire

This book, the story and performance were outstanding! Very highly entertaining listen. The narrator did a great job of capturing the gothic dark landscape and characters that the story takes place in.

Not only was the story original And gripping, the narrator kept me totally engaged. I love the new take on this old vampire story and hope that the second book comes out soon.

The narration was the best Ive ever heard. Makes the characters come to life. The story is exciting, witty and heartbreaking. Can't wait for more. Incredibly written. So many good lines. Ignore the reviews about the foul language, it adds to the character development and intrinsic story.

Amazing tale with a narration that does it justice!!! Looking forward to the rest of the series.

loved the story. I found reminders of Interview with a vampire & Name of the Rose within its pages, but not too much. The narrator most definitely added to my overall enjoyment of the book & I hope Damien Lynch does more. Excellent..couldn't stop lustening

Captivating story, mystery, action, this book has it all! First time reading/listening to a book by Jay Kristoff and you can bet I’m buying more! Narration is incredibly important with audio books and Damion Lynch does not disappoint! I’d listen to almost anything narrated by him! Cannot recommend this enough

Interview with a vampire

Killer. First time with this author. Shades of Joe Abercrombie and P. Rothfuss ( still waiting for more king killers). Not quite there yet but very good. A great rich story arc told in backwards time. Almost like a collection of shorts. Compulsive listening honestly couldn’t wait to get back to it. This is not a YA novel. Looking forward to more from this world and author. Worth your time and cash/credit

I know it's cliche to say but there are not enough words to describe what this book made me feel. It was dark, bloody, romantic, thrilling, tantalizing, heart-rending, and hopeful. I loved it from beginning to end and cannot wait for the 2nd book. It has left my heart racing and it's going to be tough to move past this book. And I honestly don't know if I ever will. It has claimed a place in my heart and on my shelf forever.
The world building was amazing. And God the characters. I love Gabe and Dior so so much and I even came to enjoy the banter between Jean-Francious and Gabe. This book delivered on all fronts with a wide cast of characters. And I'm happy not everyone died in the first book or picking up the 2nd would be a test in endurance for me. Though I'm still terrified to see how it all fell to pieces.

Also the narrator was on point with this one. He brought these characters to life! I sincerely hope he reads the other books in the series because I cannot imagine listening to anyone else portray Gabe. Nope no thank you.

Most brilliant masterpiece of the year. Best thing since Interview with the Vampire. Will be an instant classic for most.

Excellently written. Not a book safe for kids. Excessive language and quite a few sexual situations. Very long. This book is basically Interview with the Vampire meets The Witcher and Game of Thrones.

I need to know what happens. A story unfinished in a world I've become immersed in, is a special little horror. The box to the world is locked and only the author has the key.

Interesting characters and great story all the way through, this one was quite a ride. Highly recommended!

I knew nothing about this book when I bought it and the lack of reviews made me cautious about its quality. Boy was I wrong. This book is amazingly vast in its scope yet held together because its mostly a first person account of one guy's life. Also it does the super smart thing of jumping around chronologically which mixes up the style and tropes its drawing on. (I'd say it dances between Lord of the Rings fellowship, and the standard 'Fantasy protagonist discovers hidden powers')

A very pleasant surprise and worth the credit 100%

was a little slow when he was young for me but other than that!? cursing and blood! I'm in!!

One of the best fantasy books I’ve read in a long time. I’ve laughed, I’ve felt the suspense, and I cried. It is a story of courage, of lost faith, of love and redemption … told with words that often sounded like poetry. Philosophical at times, harsh at others, it takes us to the journey of a man who …. (Can’t tell you more without spilling the beans 😉)
Cant wait for book 2… Jay, you truly have outdone yourself with this one. Simply beautiful!

Wow. That's all I can say. Words cannot express how extraordinarily well written this book is. We get fantastic world building, authentic character development, and Kristoff's signature humor breaks up the very heavy subject material in this epic dark fantasy saga. I am in love with so many pf the characters and this has become an all time favorite vampire novel! Anxiously awaiting book 2! 😍