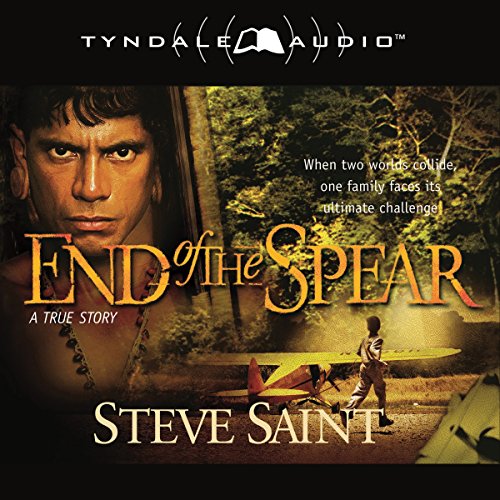 End of the Spear

Written by: Steve Saint
Narrated by: Todd Busteed
Try for $0.00

Steve Saint was five years old when his father, missionary pilot Nate Saint, was speared to death by a primitive Ecuadorian tribe. In adulthood Steve, having left Ecuador for a successful business career in the United States, never imagined making the jungle his home again. But when that same tribe asks him to help them, Steve, his wife, and their teenage children move back to the jungle. There, Steve learns long-buried secrets about his father's murder, confronts difficult choices, and finds himself caught between two worlds.

Now a major motion picture (January 2006), End of the Spear brilliantly chronicles the continuing story that first captured the world's attention in the best-selling book Through Gates of Splendor.

What listeners say about End of the Spear

Amazing, powerful story that shows the beautiful ways in which God works. It will inspire you and transform your heart.

I had a general knowledge of the story of the five missionaries who were speared in Ecuador but this book filled in a lot of missing details. I do think the reader should slow down and read with more expression.

Narration was good and used fluctuations that made it interesting to listen to it. The story is one of inspiration but so much heartbreak. Will listen to it again!

This is a great book, well worth the read. Amazing to see God's working through a seeming tragedy to bring Himself glory and draw men to him. Also eye opening to see the plight of indigenous people groups trying to adapt to a modern world...tough thing.

The book was super awesome! The narrator was (according to my personal preference) a little off. I felt his inflections and emphasis didn't fit the author. In my opinion, the narrator sounded sarcastic but I don't get the sense that Steve Saint is like that. But the story itself was so fun to listen to! It definitely challenged me!

Powerful. Moving. A must read!

an inspirational story which is sure to challenge you to a better way of living, a higher way of believing and thinking. do not be surprised if at the End of This Book you are ready to rearrange your priorities.

Amazing story that only God could write

Love the story, adventure and significance. The narrator's delivery is a bit cheesy like an evening anchorman but I got used to it after a while

Every follower of Jesus needs to hear this story! While it will encourage and challenge everyone, it will particularly speak to those who have answered the call of ministry and have experienced the many trials and tribulations that God uses to shape us into His image and for His glory!