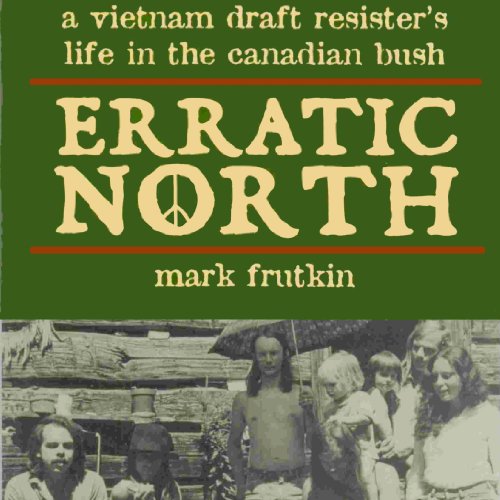 In geology an erratic is a "boulder or rock formation transported some distance from its original source, as by a glacier." In award-winning novelist Mark Frutkin's case, his movement from his native Cleveland. Ohio, was instigated by his wish to protest and resist the U.S. military draft during the Vietnam War, and his destination was Canada.

An estimated 50,000 to 100,000 American Vietnam War draft resisters sought sanctuary in Canada. Many of these men stayed, became Canadian citizens, and have made significant contributions to the country, including writers such as William Gibson, George Fetherling, Keith Maillard, and Jay Scott; musicians Jesse Winchester and Jim Byrnes; children's performer Eric Nagler; and radio personality Andy Barrie.

Although this first nonfiction work by Mark Frutkin looks back at the circumstances and culture of the late 1960s and early 1970s that prompted the author to relocate to Canada, Erratic North is about many other things. It's also a lyrical meditation about "returning to nature" in the bush country of Quebec and an account of the crucible that forged one writer. Tying everything together, though, is the overarching theme of the book: A contemplation of humanity's embrace of war and violence and the countervailing impulse to resist that embrace, specifically as seen in the experience of Frutkin himself; his grandfather Simon, who escaped Tsarist Russia and its military in the 1890s; and Louis Drouin, the Quebec farmer Frutkin bought his original farm from and who resisted conscription in World War II.

What listeners say about Erratic North

Nice life if you can afford it

Not everyone had the luxury of avoiding the draft. Those of us who were drafted or who enlisted did what we believed was right and some of us do it again. Mark claimed the war was lost in the paddies and jungles of Vietnam it was not. It was lost in Washington when chickenshit politicians who cared more about their votes than winning betrayed us. Mark talks about poverty as if he was affected by it himself. He also talks about travel to other countries with friends. Not something you can do without money. He talks about having his daddy contact his buddies in the upper echelons of a company in Canada which allowed him to get landed immigrant status because he had a job. He talks about sitting around reading and writing and la dee da. Again, nice life if you can afford it.

There should be parentheses under this book’s title. Erratic North (or How I learned to Stop Worrying and Have My Rich Daddy Help Me Dodge the Draft). The author’s old man had influential business contacts in Canada and aided his son’s cowardly flight. Frutkin goes on to describe his pseudo survivalist exploits in Canada. So many hardship! As if he couldn’t leave for more comfortable accommodations if he really wanted. Are we supposed to identify with this guy? A person who spent so much time (and lots of money he didn’t earn) traveling around the world, reading, writing, and basically living it up. Using connections to get out of the draft is bad enough. But our author was called forward and he literally abandoned his country. I say good riddance