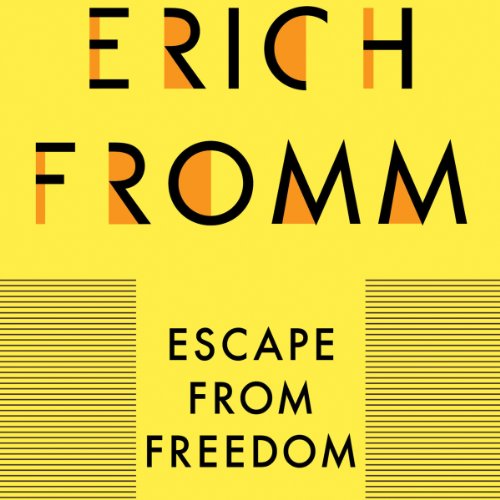 lf a man cannot stand freedom, he will probably turn fascist. This, in the fewest possible words, is the essential argument in this modem classic, Escape from Freedom. The author, Erich Fromm, is a distinguished psychologist, late of Berlin and Heidelberg, now of New York City.

He applies the psychoanalytical method to the illness of our civilization which expresses itself in an abject submission to dictatorship. It is true that the rise of democracy set men free and brought to an end the authority of the medieval state and the medieval church. But it brought into existence a society where a man feels isolated from his fellows, where relationships in an industrial age are impersonal, where insecurity replaces a sense of belonging.

This sense of isolation may drive an individual to one of various forms of escape. lt may drive a people to seek escape in blind devotion to a leader, in utter submission to an all-powerful state, into a barbarous and sadistic program of aggression against minority groups or neighbor nations.

Few books since the rise of the dictators have thrown such light upon our times. Few books have penetrated so clearly into the causes of fascism and Nazism - and into the inherent qualities of a democracy. In his psychoanalysis of the social scene, the author makes a new contribution to psychology by modifying the basic concepts of Freud in placing a purely biological orientation by a cultural one.

To all who see that democracy today faces its gravest hour, Dr. Fromm illustrates the essential character of the danger and the nature of democracy's responsibility. By its brilliant exposition of the modern social scene Escape from Freedom will help clarify many of today's most perplexing problems.

What listeners say about Escape from Freedom

Why is this not required reading in high school?

What made the experience of listening to Escape from Freedom the most enjoyable?

Listening to this book was enjoyable yet frustrating. It is 2016, and the world has spent the better part of a year listening to a disaster of a US presidential election. Many of the topics and points touched on here resonate with the state of politics today, and I could help but see parallels between the current state of affairs and those of pre-WWII Germany.

I am not a psychologist, yet Fromm spent the time to clearly explain concepts regarding consciousness and psychology. Once the foundation was laid, he then applied it to both thought experiments and real world examples, making it very easy to understand his conjectures.

I hate to admit it, but he leans on Freud a lot to explain neurosis and psychosis. This made me smile a bit since most of that theory has been disproved over the years. However, the conclusions which are reached are still viable if you were to go back and update those sections of the book.

The section regarding self-doubt moved me very much. Some points almost felt as if he had read my mind.

This book should be required reading at some point in school. It would help people to understand themselves better and in turn those around them. And... it might just help people treat each other with a bit more dignity and respect!

Fromm is an amazing theorist, but the narrator read the entire book without an ounce of inflection. It was so difficult to listen to, that my mind would wander and I would forget what was going on. I loved the content, but the narrator ruined it. Did he understand what he was saying? I can't be sure.

I loved this book even though it's diffucult to absorb and digest in few sessions. I needed a month to finish but it was worth it!

Would you listen to another book narrated by Anthony Haden Salerno?

As long as they are not books by a German author.

The narrator has a pleasant voice and is easy to understand. Unfortunately he mispronounced many German words. This is particularly a problem when narrating a book by a German author writing partly about Germany and the rise of Hitler. The great German sociologist Max Weber's name should be pronounced as if spelled Veber, not like the name of a popular charcoal grill.

I don't know what to say. The concepts covered in this book and the questions of freedom truly being what we think it is - or being just another cage but self-imposed... The ideas that we accept everyday as being reality, are they authentically our own or unquestioned assumptions from our respective societies? Can we accept ourselves and others as who we truly are, shadow sides and unreasonable parts included?

Enlightening. Fromm discusses the psychological, social, and economic conditions to which freedom can flourish in man. Explaining his thesis his writing is deliberate and clear. It is timely and yet timeless. I read chapters more than once. Salerno’s narration was somewhat monotone but very helpful while I read the book simultaneously. This book has left a strong impression on me.

I like so many of his books. hard to get even my closest friends to read it, and that would save all my friends so much needless suffering.

A book EVERYONE should read.

It has a slow start, but once you get used to the style, the depth and bredth of the book blooms and blew me away. I can't even begin to recount how much this discussion of freedom and the mental forces that led to authoritarianism in the 1930s are equally applicable today. I now have a much clear picture of what it takes to make someone swallow a "leader" like Trump and others.

I enjoy listening to audiobooks, but this narrator completely butchered the manuscript. He's reading as the Text-to-Speech on Google or Microsoft services. I'm sorry but I couldn't follow his voice for more than 5 minutes.
The book itself is one of the most important books in psychological sociology.

A Must Indulge in logic, philosophy and constructive social criticism. Please do Everyone a favor and listen to this.