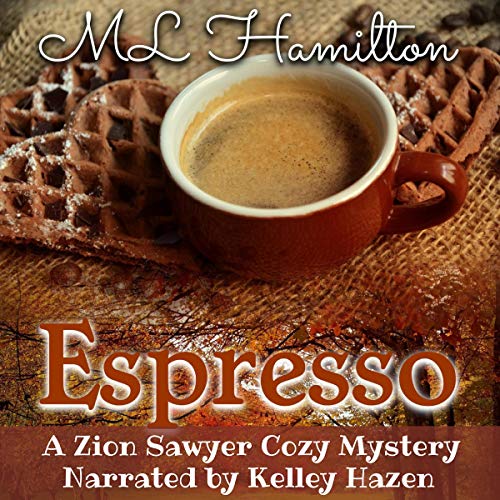 Tate left the LAPD after his partner Jason died. He didn’t want to discuss the traumatic experience with anyone, but when a former brother in blue arrives in Sequoia, Tate is forced to confront his demons or start running again.

Zion has made a home in Sequoia, but her conflict between her past with David and her future with Tate must be reconciled. However, when her best friend Rebekah winds up on her doorstep, Zion finds her attention divided between her life and the train-wreck that has become Rebekah’s.

With the first annual Halloween festival fast approaching, the townspeople in Sequoia are confronted with the possibility that violence might once again visit their town, and both Tate and Zion are caught right in the middle of it.

What listeners say about Espresso

ML Hamilton has done it again by writing another cozy mystery featuring characters that I love. Espresso continues the relationship of Zion and Tate, and has cameo appearances of other characters from previous books. This is both a standalone listen and another mystery in the series. I love how the author writes great imagery of the town of Sequoia, and adds humor and unexpected twists. Kelley Hazen does a fabulous job bringing the characters to life. She gives them distinguishable voices, so I know who is speaking. Her expressions are spot on! I am looking forward to the next book in the series.

This is a good story but the romance overshadows the mystery at times. It was still good, and, I look forward to the next book.

I'm Hooked on this series

Love this series and I am waiting on the next book.

I'm really enjoying the characters in these books, fun to find another good author to listen to.

Espresso was another great read by M.L. Hamilton. This is the third book in The Zion Sawyer Cozy Mystery Series. Zion and Tate have been making Sequoia their home. Tate came to Sequoia to escape the traumatic experience as an LAPD officer. Zion is making Sequoia her home and trying to make her business a success. I really enjoyed reading Tate and Zion growing closer as friends but also as a couple. This is a great read and I can't wait to read more of Zion's story.

My favorite characters from the first two books in the series were back in this third installment. I loved having the opportunity to hear Tater Tot’s story. (I love that nickname!)

M. L. Hamilton has created a wonderful town with unique and interesting characters. I can’t wait to experience the rest of their stories!

The Zion Sawyer Cozy Mystery series just wouldn’t be the same without Kelley Hazen. Kelley has brought each of the characters to life with distinctive voices. It’s obvious that she loves what she does. I look forward to her next performance.

I have to admit I do enjoy a good cozy mystery once in a while and enjoyed this one especially the narration and characters. The main character is Zion Sawyer owner of the coffee shop in Sequoia CA and is dating Tate. The book has great character development, Jaguar now has music shop and sees his daughter, Rebecca longtime friend came to stay at Zion’s, and Tate is fostering Logan. This book is about Poole, also a police officer from LA who worked a case with Tate, he is on suspension from shooting a kid back in LA this is where the mystery comes in.The book has an unexpected ending. Recommend if you enjoy cozy mystery series but suggest you listen from the start to know the characters. I was given this free review copy audiobook at my request and have voluntarily left this review. Thank you

I was voluntarily provided this free review copy audiobook by the narrator and found it very entertaining. As fall settles into Sequoia, Zion just wishes her own life could settle down, but that is not in the cards for her. Her best friend Rebecca shows up on her doorstep and ex coworker of Tate's stirs up their calm lives, giving them another mystery to solve. You'll find yourself totally caught up in the characters as you laugh and cry with them while trying to solve the mystery. As always this author and narrator combination creates an awesome listen. Looking forward to the next book.

I love this series

This series keeps getting better and better. I loved crawling inside this book as I was an actual part of this world. The characters work well with each other and the narrator does a great job of maintaining the personalities she has created for each. I was given this free review copy audiobook at my request and have voluntarily left this review.

Tate's Past Comes Back to Haunt Him

In Espresso by M.L. Hamilton, former LAPD detective Tate Mercer, now owner of the hardware store in Sequoia, CA, finds that he can't escape from his past no matter how hard he tries. Just as Tate finally gets a date with Zion Sawyer, owner of the Caffeinator, Zion's best friend, Rebekah, shows up in town at the same time as Tate's former LAPD colleague, Keith Poole, who is on administrative leave for having shot and killed a 14-year-old boy.

A week after Poole arrives in Sequoia, Tate gets a call from Sheriff Wilson in the middle of the night. Poole, who has been in bed with Rebekah after she stormed out from a fight with Zion, has shot and killed an intruder to his rented cabin. Seeing a familiar tattoo on the dead man, Tate recognizes a member of the Devil's Tongue gang, the group that killed Tate's partner, Jason, when their police raid went horribly awry. Now Tate must face his past in order to have hope for the future.

Espresso was a little heavier book than the first two in the series, as we deal with the loss of Jason and fear that the gang has found its way to Sequoia. However, I thought the weight added depth to the book and really liked it. I was happy to get answers about Tate's past finally and really enjoyed seeing his relationship with Zion develop. She is still the main character of the series, but Tate has a pretty similar sized role in this book.

Kelley Hazen performs the audio edition of this book. I enjoy most of her narration and voices for the characters, but I did think her voices for Sheriff Wilson and the other police detective in Sequoia were too nasal and annoying. I also really wish she had taken the time to learn how certain place names in Central California, in particular Visalia and Tulare, are pronounced. However, for the most part she has a warm and friendly voice that makes listeners feel welcome to join in with the lives of the audiobook's characters.

I really enjoyed listening to Espresso. I think the book had a great storyline and continued its development of the characters we came to know and love in the previous two books. I look forward to the next book and give this five stars.

Disclaimer; I received this book for free for review purposes, but that had no impact on the content of my review.