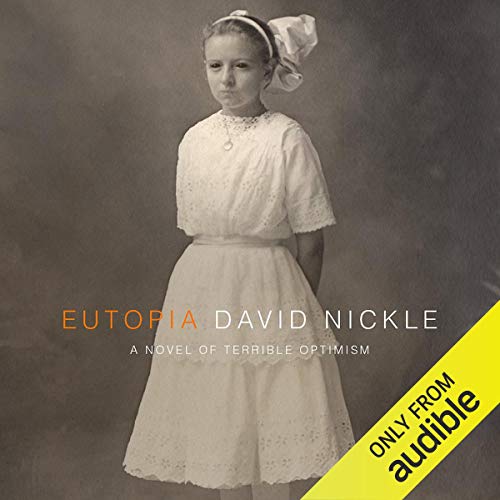 Written by: David Nickle
Narrated by: Oliver Wyman
Try for $0.00

The year is 1911. In Cold Spring Harbour, New York, the newly formed Eugenics Records Office is sending its agents to catalogue the infirm, the insane, and the criminal - with an eye to a cull, for the betterment of all. Near Cracked Wheel, Montana, a terrible illness leaves Jason Thistledown an orphan, stranded in his dead mother's cabin until the spring thaw shows him the true meaning of devastation - and the barest thread of hope. At the edge of the utopian mill town of Eliada, Idaho, Doctor Andrew Waggoner faces a Klansman's noose and glimpses wonder in the twisting face of the patient known only as Mister Juke. And deep in a mountain lake overlooking that town, something stirs, and thinks, in its way: Things are looking up.

Eutopia follows Jason and Andrew as together and alone, they delve into the secrets of Eliada - industrialist Garrison Harper's attempt to incubate a perfect community on the edge of the dark woods and mountains of northern Idaho. What they find reveals the true, terrible cost of perfection - the cruelty of the surgeon's knife - the folly of the cull - and a monstrous pact with beings that use perfection as a weapon, and faith as a trap.

What listeners say about Eutopia

While not in the same league as Stephen King, the idea for the story was so unique that it kept my interest. Its nice to read something with an original approach. I found it well described and details seemed realistic for such a strange concept. I also liked the time period and the dialogue felt accurate historically.
The narrator was slightly above average in that he neither added or detracted to the story line. All in all I would say that it was worth my time to listen and with the exception of the ending, a well crafted book. While I would not rush out and buy another book from this author I would at least be motivated to explore his other works.

Though the story itself was sorely lacking (limited creativity), I remained glued to the book due to Nickle's exceptional prose; his descriptions easily painted images in my mind and helped me feel the thoughts and emotions of the story's many characters. It is seldom to read/listen to a book that is so finely crafted.

Would you try another book from David Nickle and/or Oliver Wyman?

I don't think I'll be looking for other titles from this author. The narrator was OK, not great, not bad. His narration tended to make me tune out unless there was something very interesting going on.

Hopefully something wonderful. I like long stories that keep me engaged for many days/weeks, full of detailed characters, settings and a well defined plot.

What aspect of Oliver Wyman???s performance would you have changed?

A little more energy and enthusiasm would've been welcome.

You didn???t love this book... but did it have any redeeming qualities?

I can't think of a single thing I did like about this story.

The dialogue of the characters in this book really annoyed me. The prim, proper English combined with the simple, almost juvenile way of speaking just didn't ring true with me. The characters were not very realistic and I didn't sympathize with any of them.
I found myself wondering what in the world was going on for most of this story, I just couldn't keep up with it. Whether it was because my attention kept wandering or because it wasn't explained very clearly I can't tell. Maybe it was a combination of both.

What disappointed you about Eutopia?

The reader did his best, but the story is confusing; the characters without substance; and the scenes of racial prejudice more in line with myths of the Old South rather than frontier Idaho. First time in 20 years of audio book listening that I failed to finish a novel. Skip it.

Already listening to the Anne Rice novel about the werewolves.

Did Oliver Wyman do a good job differentiating all the characters? How?

I have no complaints about the reader - a nice, trained voice and good story teller.

What character would you cut from Eutopia?

As many as you'd let me.

What disappointed you about Eutopia?

From the book summary, the cover and the audio sample, I thought this book was about a social experiment gone horribly wrong and the impact it had on real people and families. Instead it is a story in the sci-fi/horror genre which is not a type of book I enjoy. As it got more and more

This is very much a horror story, not a dystopian story. Also, it was rather boring.

What made the experience of listening to Eutopia the most enjoyable?

It really should be either a novel about Eugenics gone wrong (can it go any other way?) or a horror story with supernatural beings -- not both. But it was fun trying to figure out the "mystery" and who was zoomin' who.

The performance was as good as could be expected. However, the story itself was difficult to stay tuned to. The first half of the story left me confused and uncertain about the direction of the story. As the second half evolved, it clearly wasn't something in which I had any interest.

Has Eutopia turned you off from other books in this genre?

I wouldn't have chosen this if I'd understood the true nature of the story.

Not much the narrator could do with the story,

This is a horror story - not a distopian fiction

I probably could have figured this out myself if I read more of the reviews ahead of time. But from the book description I thought this might be more of a look into a distopian society...but it was really just a Stephen King style horror story.

Would you ever listen to anything by David Nickle again?

I agree that the synopsis was extremely misleading. I didn't not expect a very silly scifi novel. This is the first book in years that I have not finished. I even went back and tried to give it a second chance, but was again disgusted by the contrived and unimaginative story.