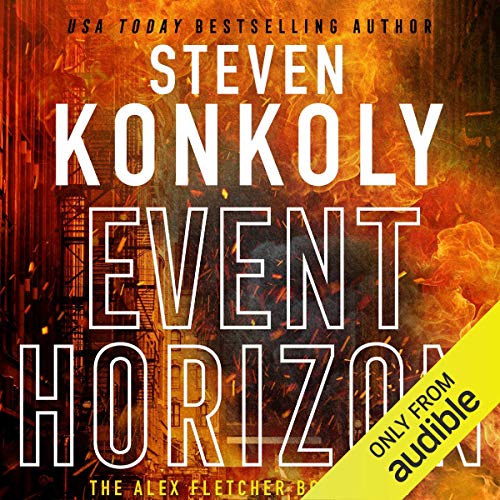 The critically acclaimed saga continues in the "explosive sequel"!

With Boston collapsing faster than Alex Fletcher predicted, his personal rescue mission deep into the heart of an increasingly unfamiliar city reaches a critical point. Pursued by a ruthless militia group and forced to navigate a treacherous landscape, he runs a gauntlet of grim decisions and impossible odds to reach perceived safety. Perceived because nothing is safe in the world emerging after the "event".

In rural Maine, a series of lethal coincidences fuels a local militia leader's ghastly strategy to raise a private army, planting the Fletchers firmly at the intersection of his power play - and the epicenter of his rage.

The human darkness released on August 19, 2019 continues to grow, threatening to tear the fabric of their fragile society apart...until nothing remains but a distant memory of the past.

What listeners say about Event Horizon

Great book! If you liked Book 1, get it

With that out of the way, this is a REALLY good book and can't wait for Book 3. Like book 1 it leaves you hanging and wanting more. If you liked Book 1 you'll like Book 2

When will book 3 be released?-great follow-up

Would you consider the audio edition of Event Horizon to be better than the print version?

Most of my books are listened to

But who knows how many more incomplete books in this series. Picked up both Book 1 and 2 at same time, excited for something similar to "Jakarta Pandemic"... and even using the same family. Didn't even bother to read the reviews... my mistake, first of all this is a series... which doesn't have natural end spots, rather he chooses the most intense spot to stop in both 1 & 2 and no end in sight. It is a fairly clean read, but the violence is WAY more intense than Jakarta and it plays heavily into the military role post event. This is slightly better than the first... writing not as sloppy and more about the family, less about Rambo. Better books than this: "One Second After," "Equipping Modern Patriots," "Objects of Wrath," "Cyber-Storm," "Swan Song," "Alas Babylon," "77 Days in September"... and "Jakarta Pandemic." If you have to choose a never-ending series... I like "The Survivalist Series" better. Wait until more of the books are out and wait for a sale, it wasn't horrid... just not worth a credit to be left dangling.

After having listened to the others in this series I've got to say Audible has a winning series going and from what I'm seeing more of the same type of adventures, keep them coming Audible.
The story continues with the same great characters and the narrator is very good at his job.
I highly recommend this if you've already listened to first in the series you can't go wrong with any of them.

Noticeably more intense than the “Jakarta Pandemic” and “The Perseid Collapse”, “Event Horizon” takes you on a wild ride from post-apocalyptic Boston, to the south of Maine. Taking place over only a few days, the book doesn’t move the story along very far in terms of time, but really adds to the overall feel of the series, and best of all it leaves off without a big cliff hanger (one of my pet peeves). We’ll written with great characters I highly enjoyed this book.

Great narration by Mr. Farrell really brings the characters to life. He does a great New England accent!

Would you listen to Event Horizon again? Why?

This offered a decent progression to the story, but nothing about it jumped out as re - listenable.

This edition ended a little kinder than the last and with an acceptable pause in the story unlike the first which ended in the middle of..........

Disappointing 1/3 (or less) of story

Would you try another book from Steven Konkoly and/or John David Farrell?

This is only 1/3 of story. Obviously editors are into making money and not releasing whole stories as one book. I've listened to Event Horizon and Perseid Collapse, both books just stopping in the middle of storyline. So the story is interesting and you should get it if you are made of money. Skip it if you are not made of money. I want to know how the story ends, but I'm reluctant to buy the next book because it will do the same thing: not finishing the story. I guess great books are a thing of the past.

This is only the first half of a bigger book.

Writing is well done. Konkoly needs to get competent consultants when writing about technical topics like EMP, ham radio, aviation, etc. Also, this book has too much violence and not enough graphic sex. You can't really have one without the other. Finally, the story does not respect law and order: under the laws of the Soviet Republic of California, it is illegal for a minor to possess a firearm and use it to kill people. Protagonist Alex Fletcher is in violation of this law for allowing his son and daughter-in-law to handle firearms. As for the daughter-in-law, I seem to envision her as a healthy looking specimen without green eyelids, black lipstick, tattoos, purple hair, nose ring, or other piercings.

Great storyline kept my interest and scared me plenty.

Don’t especially like these types of storylines but this was told well . Don’t like cliffhanger s either but I figure I will get the next book

Hard to put this one down! Each book ends with me scrambling for the next. Steven has done a good job creating a hypothetical that leaves you asking "could something like this really happen?"