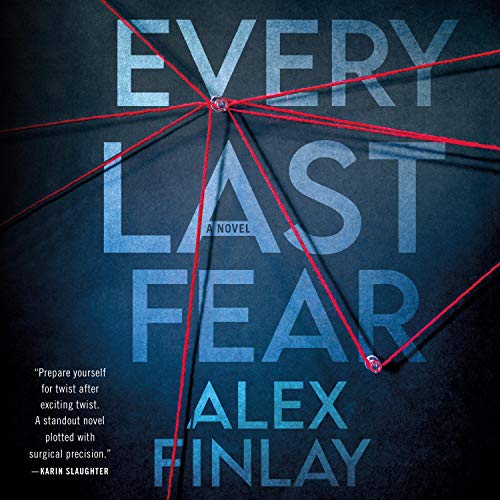 "Finlay’s debut is a twisty puzzle that will please fans of thrillers, suspense, and true crime. Cady McClain and Jon Lindstrom capably voice a large cast of characters and keep ratcheting up the tension." (Library Journal)

One of the Most Anticipated Books of 2021: • Newsweek • CNN • E! Online • Goodreads • BuzzFeed • PopSugar • BookBub • Bibliofile • Mystery and Suspense

In one of the year’s most anticipated debut psychological thrillers, a family made infamous by a true-crime documentary is found dead, leaving their surviving son to uncover the truth about their final days.

“They found the bodies on a Tuesday.” So begins this twisty and breathtaking novel that traces the fate of the Pine family, a thriller that will both leave you on the edge of your seat and move you to tears.

After a late night of partying, NYU student Matt Pine returns to his dorm room to devastating news: nearly his entire family - his mom, his dad, his little brother and sister - have been found dead from an apparent gas leak while vacationing in Mexico. The local police claim it was an accident, but the FBI and State Department seem far less certain - and they won’t tell Matt why.

The tragedy makes headlines everywhere because this isn’t the first time the Pine family has been thrust into the media spotlight. Matt’s older brother, Danny - currently serving a life sentence for the murder of his teenage girlfriend Charlotte - was the subject of a viral true crime documentary suggesting that Danny was wrongfully convicted. Though the country has rallied behind Danny, Matt holds a secret about his brother that he’s never told anyone: the night Charlotte was killed Matt saw something that makes him believe his brother is guilty of the crime.

When Matt returns to his small hometown to bury his parents and siblings, he’s faced with a hostile community that was villainized by the documentary, a frenzied media, and memories he’d hoped to leave behind forever. Now, as the deaths in Mexico appear increasingly suspicious and connected to Danny’s case, Matt must unearth the truth behind the crime that sent his brother to prison - putting his own life in peril - and forcing him to confront his every last fear.

Told through multiple points-of-view and alternating between past and present, Alex Finlay's Every Last Fear is not only a gripping thriller, it’s also a poignant story about a family managing heartbreak and tragedy, and living through a fame they never wanted.

"Prepare yourself for twist after exciting twist. A standout novel plotted with surgical precision.” (Karin Slaughter)

“Brilliant. Finlay weaves a story as mesmerizing as it is heartbreaking. Hooks you from the very first page and keeps you guessing until the final explosive twist. Taut, smart, and compelling. A do not miss!” (Liv Constantine, internationally best-selling author of The Last Mrs. Parrish)

What listeners say about Every Last Fear

There are ads in this audio book!!

The story was good, but returning this book bc of the ads!! So annoying! I have never encountered this before.

This is book one of the most well-constructed mysteries that I have ever read and that is significant, because I have been reading since I was a preteen and I am now 70. Treat yourself to this book. You deserve it.

This is in response to the Most Helpful 1-star review stating there are ads in this audiobook. The only thing I can imagine is the rater could not follow the story enough to realize the "ads" were excerpts of a (made-up) Netflix documentary that is part of the novel. Not helpful!

Too obnoxious to finish

The story was interesting enough, but every female character is completely flat, the protagonist is described as a "hot nerd" because God forbid she just be smart? And there are random offensive references sprinkled throughout, like when a character fell and "an obese guy waddled over and helped him up." Like why?? That guy's not even a character in the story, this author just chooses to be a jerk for no reason. It's like reading a novel by a high school bully who got a B+ in creative writing.

Weaving together a variety of points of view and providing the clues through non-linear story telling, the author does a great job of keeping the reader guessing about what's really going on and who's behind the crime. Really interesting way of taking the fascination the public has for "true crime" stories and using that to drive the plot of this fun "read." Using two readers for the audio book was a great choice as well, as it helps emphasize the different lines of the story that are going on at once. Looking forward to more from this author!!

The story gets off to a promising start, but after a few hours it becomes a painful listen. The female narrator tries too hard and her performance falls flat, particularly when she voices the teenage daughter. I also found much of the dialogue throughout the book stilted, awkward, and amateurish. Ultimately, I couldn't buy in to the story.

I've enjoyed this story. It made me cry, it made me talk back and it made me hold my breath!
The narration was absolutely perfect, drawing the story in my mind. I may listen to it again!

Don’t think twice - this one is Suspenseful & Smart

Every Last Fear showed up in my feed as a suggested read and I’m glad I did. The story was suspenseful - well developed characters and the narrators did a great job bringing them to life. The technical details were accurate without over burdening the reader/listener with unnecessary details. I found myself wanting to know more, and re-listening to chapters to make sure I didn’t miss any important details. Well rounded story that didn’t leave any loose ends. Look forward to more from this author, and the narrators as well.

This book pulled me in & didn't let go. Definitely a favorite! On to check out this author's other books.

I came close to stopping the book about 4 times. Finally I finished and you know what….it didn’t get better!!!
The characters were blah. The plots were too many and blah. Maybe I’m just getting too old…?!