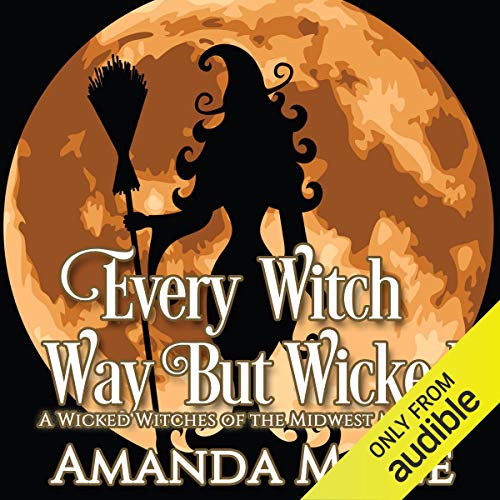 Every Witch Way but Wicked

Where there's a witch, there's a way! Where there's a whole family of them, there's trouble. Bay Winchester, editor of Hemlock Cove's small weekly newspaper, thinks her small hamlet's upcoming murder mystery weekend is going to be all about fun, food, and frolicking. Instead, when another dead body is discovered in Hemlock Cove, things turn into murder, mayhem, and migraines (the latter is mostly thanks to her family, of course). The body belongs to the town drunk - and no one can figure out who would want to kill him, or why. Bay's investigation is stymied by her new boss, Brian Kelly, and her old flirtation, FBI agent Landon Michaels, both of whom seem to have more than interviews on their mind. When you couple that with her cousin Thistle's obsession with making their Great-Aunt Tillie pay for the curse she recently put on them (you don't want to know) and her cousin Clove's conviction that she is not - no matter what the rest of the family says - a blabbermouth, Bay has her hands full. When the murder investigation takes a turn, though, a long-held Hemlock Cove secret is bound to be exposed. If it is, Bay may find herself in trouble - again - and this is the kind of trouble that she may not be able to find a way out of - even with Aunt Tillie's help.

What listeners say about Every Witch Way but Wicked

Although I'm still abruptly jolted out of the story by more adverb over usage than I can count, the story isn't as forecasted and it's more challenging to figure who-done-it. Nice. The narrator needs to stop assuming she knows how to pronounce words she's apparently not heard before (an unfortunate side effect of big readers). Aris, PLEASE learn how to pronounce "vehemently" and "amiable". It pulls me away from the story every time. Editors?? Do you even listen and critique? At lease Aris is beginning to slow down and enjoy telling the story instead of beating all speed reading records. Act it and it's far more enjoyable for all of us. Professional narration is no longer merely reading a story aloud. It's an entertainment industry and meant to bring the story to life. You can do this Aris. Keep learning!

Love the witches in this book, they are snarky. the narrator is good too and clear. the only thing that prevented me from rating it five stars was that the narrator needs to slow down.

Enjoyed the story but not the narration

What was one of the most memorable moments of Every Witch Way but Wicked?

I enjoy what Aunt Tilly does to her nieces. Hair lips!

Who would you have cast as narrator instead of Aris?

ANYONE! Aris has real issues with word pronunciation.

As always. This author rocks

This story is awesome. I laugh so much I almost wet my pants. Lol. It's even better in audio. This whole series rocks.
I for one can't wait for the next audio in this series.

I loved Aunt Tillie. I was constantly looking forward to her next bit of mischief.

The mystery was pretty easy to solve but the comedy more than made up for it. I laughed through out the whole book. I can't wait for the rest of the series to come out on audio.

Nice, fun story. Worth a listen if you have a few hours. Only two of the books in the series seem to be on Audible.

Funny and lots of laughs

It was a great listen. Laughed out loud and very much enjoyed the story. I like the characters

if you followed my advice to slow down the narration on the previous (1st) book, you can kick it back up to normal 1.00 speed for this one. aris has apparently found her groove 😉, and ms Lee continues to be in Hers!
💗💗💗

these stories are fun and can actually make me laugh out loud. the characters really crack me up.