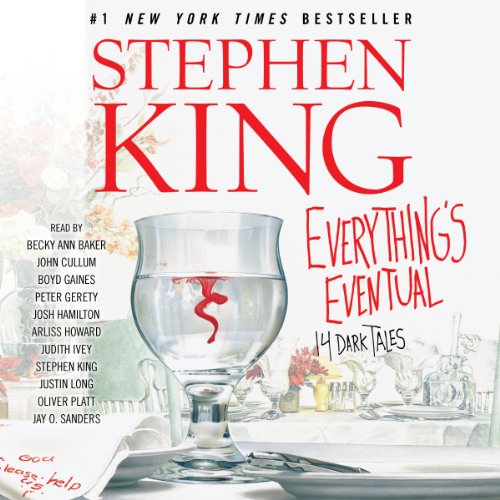 The first collection of stories Stephen King has published since Nightmares & Dreamscapes nine years ago, Everything's Eventual includes one O. Henry Prize winner, two other award winners, four stories published by The New Yorker, and "Riding the Bullet," King's original e-book, which attracted over half a million online readers and became the most famous short story of the decade.

"Riding the Bullet" is the story of Alan Parker, who's hitchhiking to see his dying mother but takes the wrong ride, farther than he ever intended. In "Lunch at the Gotham Café", a sparring couple's contentious lunch turns very, very bloody when the maître d' gets out of sorts. "1408" is about a successful writer whose specialty is "Ten Nights in Ten Haunted Graveyards" or "Ten Nights in Ten Haunted Houses", and though Room 1408 at the Dolphin Hotel doesn't kill him, he won't be writing about ghosts anymore. And in "That Feeling, You Can Only Say What It Is In French", terror is déjà vu at 16,000 feet.

Whether writing about encounters with the dead, the near dead, or about the mundane dreads of life, from quitting smoking to yard sales, Stephen King is at the top of his form in the 14 dark tales assembled in Everything's Eventual. Intense, eerie, and instantly compelling, they announce the stunningly fertile imagination of perhaps the greatest storyteller of our time.

What listeners say about Everything's Eventual

I have always loved King's short stories, and I enjoy listening to them while falling asleep.

Good and some “meh”

#audible1 some stories really blew me away (1408, the road virus,) but some I couldn’t stand to listen too... just monotone..

Some of the stories didn't catch my attention, possibly due to narration. That being said I truly enjoyed this book overall and would highly recommend it.

This is a vehicle for listening. We don’t need music

I’m so fed up with producers pushing music and effects on these stories.
I’m buying the words of the author not amateur atmosphere. Please stop infecting these stories with unwelcome sounds.

A great collection with excellent narration.

There are no bad stories in this collection. Love it.

“The Man in the Black Hat” – Somewhat less definitive than I would have liked, but the descriptions are amazing. Three stars.

“All That You Love Will Be Carried Away” - The lady or the tiger? Four stars.

“The Death of Jack Hamilton” – This was so sad, and also disgusting. King can definitely make you feel all the feels, even in only one short story. Four stars.

“In The Deathroom” – I think this was extremely well-characterized for such a short story. I liked the ending a lot, too. Four stars.

“The Little Sister of Eluria” – I don't really understand the relationship between the Little Sisters and the doctor bugs. And Jenna's motivations mystify me. Still decent. Three stars.

“Lunch at the Gotham Café” – This one kind of bored me. Two stars.

“That Feeling, You Can Only Say What It Is in French” – This one kinda went over my head, I think. Two stars.

“1408” – Absolutely terrifying and fascinating. I may have to watch the movie now. Five stars.

“Riding the Bullet” – Soooo....was anything actually changed by George or....? Three stars.

“Lucky Quarter” – I so want to know what happened next. Three stars.

Not the best short story collection King has ever done (still Night Shift), but there are some gems here you definitely should not miss, whether you're a diehard Constant Reader or not.

I enjoyed it, with one small hitch.

Well written, great narration, but sometimes the intro/outro music overpowers the narration. chapter 16 is the biggest example. The sax overpowered Stephen King's narration and I really couldn't understand it.

It Was So Eventual

I bought this audio book because I enjoy listening to Stephen King narrate his work. I've listened to all the novels he has narrated so far, and now I'm on to the short stories, starting with this one. I was not disappointed. LT's Theory of Pets was a live reading, and it was enjoyable, though it was a little strange hearing this live recording sandwiched in between studio performances which had better sound quality. Justin Long was the perfect narrator for Everything's Eventual, which ended up being my favorite tale.

please stop with the music in King books

who ever is responsible for the audio version of Stephen King books, please stop with the musical breaks! they are distracting; and some times continue over the narrator. in 1408 (read by King) the first several sentence are nearly obscured by the music. I like the book overall, some stories drag a bit.

A great book for the beach or beside the pool.

Absolutely would recommend this title. I listened to it while on vacation and some of these tales will haunt me ever after.

This was a collection of short stories. Everything's Eventual, the title story about a geek with an unusual ability to create deadly emails, was brilliantly told, unfolded. The story about the boy trying to hitch-hike to a neighboring town to visit his sick mother presented that character with an unthinkable choice. The one about the road virus was terrifying. All of the stories included were good.

Some interpretation of the characters, I suppose. Hearing someone read to you is comforting and ensures comprehension, narrators in this collection were not intrusive and did a good job of interpreting the characters.

If you could take any character from Everything's Eventual out to dinner, who would it be and why?

The email writing geek. I want to hear more about the glyphs he can construct.

I LOVE EVERYTHING about this book. It’s my favorite collection of stories by King. The paperback of this has been in my bathroom for years (tmi I know lol). There’s a story for almost every mood (except perhaps romance). There’s action, comedy, suspense, drama, horror. It’s read beautifully. My favorite stories on here are death room, L.T’s theory of pets, that feeling you can only say in French, Gotham cafè, 1408... I’ve read this book cover to cover and read and re read my favorite stories countless times.

A few great, some good, a lot mediocre.

Stephen King is by far one of the greatest writers of our time. I don't believe he is just a horror writer either. His characters are often complexly human in a way that most writers struggle to articulate. That being said, most of the stories in this book are just average. However, average at Stephen King standards it's still worth a listen if you're a fan. There are a few great short stories in this collection. Only, far fewer than I had hoped.

What did you love best about Everything's Eventual?

I like King's novella's they display some of his best work. He doesn't go overboard with detail or setting a scene. He actually lets you end his stories yourself through lack of full disclosure and information.

Most memorable character was the crazy matrè'd in the story regarding the divorce.

There are many narrators but I do not like King as a narrator. It's his voice it doesn't seem to have the ability for convincing me he is no more than a reader of a story so it takes longer to figure out characters. His voice doesn't give enough of a differentiation between characters.

If you could rename Everything's Eventual, what would you call it?

My new title would be, "IT COULD HAPPEN".

Enjoyed the stories and narration. Music is awful and distracting though.

Also didn't much like the inclusion of the long Dark Tower story.