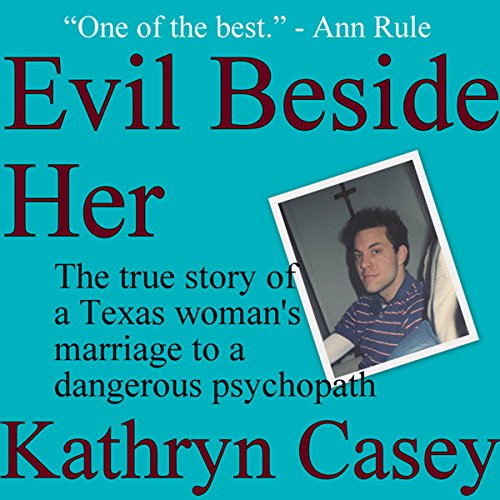 Written by: Kathryn Casey
Narrated by: Debbie Andreen
Try for $0.00

At first, Linda Bergstrom's marriage to her husband James was idyllic. They were young and in love; he was about to enter the Navy and she was eager to start a family. But it wasn't long before the dream exploded. James became abusive and violent, prone to sudden bursts of anger, long silences, and unexplained disappearances. But Linda vowed to hold on, despite the pain and fear...and her disturbing suspicions about her husband's secret life.

Then, not long after their move to Houston, Texas, she made a terrifying discovery: James's hidden cache containing duct tape, a ski mask, and handcuffs. No longer could Linda Bergstrom deny the hideous truth.

The man she lived with, the man she married for love, was a dangerous psychopath. And there was no escape and nowhere to run. Because no one - not her friends, the Navy, or the police - would believe her.

What listeners say about Evil Beside Her

Yes. I believe this is Ms. Casey's first true crime book (The Rapist's Wife), with an epilogue at the end. It is clear that she has not honed her skills of true crime books with this effort, but it is still a chilling read. It is definitely more graphic sexually with regard to the marriage of James and Linda, and less about the crimes he committed and the people whose lives he changed.

What does Debbie Andreen bring to the story that you wouldn’t experience if you just read the book?

She was an incredible narrator choice for this book! Her accents and tones were superb... I'd read almost anything else she narrated!

While this is not Kathryn Casey's best work, it is a worthwhile addition to the true crime genre. Her other books, particularly She Wanted it All and A Descent into Hell are much stronger books.

This book will have you checking your door and window locks two or three times before you go to sleep or take a shower. The man in this story is just unbelievable. Sometimes, fact is more interesting than fiction. This is one of those times.

I bought this book hoping it would be interesting. The narrator did a decent job. I returned this book because of the multiple references to child sexual abuse. (I got to about chapter 4.) Although the mention of the abuse was not overly graphic, it was certainly disturbing. I wish I would have known this fact before I bought this book. I am writing this review to warn other readers.

This woman lived through hell, but I have to put out my frustration: One quick judgment about my feelings listening to the book: Author makes a bit too many excuses for the wife staying in her marriage. I think she made a lot of bad excuses to stay in the marriage. I think she wanted to be cared for by a man. Nothing wrong with that except that he was a horrible person. Not that he was rich, but she loved it when she was a soldiers wife. Loved her experience as part of a community. Once she found out about first rapes and stalking, she should have left. Period. Having children with him was a horrible idea. Then her child turns out to be female. He should never be around a female child, given his background. This idea of staying to get evidence is a hard to a accept bc she knew she couldn’t be witness as his wife. She literally couldn’t catch him.
That aside, I feel horrible for this woman and all she went through. For all this guy’s victims. He’s typical Peeping Tom turn Rapist. The next elevation would have been to murdering the women he raped so there’s no witness. And the reality of “helping” a deviant like this to change his ways is nearly impossible.
Despite my rift on her staying in the marriage, this lady did a whole lot to help bring justice to him for his victims. Rape is difficult case to prove, and hard for victim’s to live thru. She did a great job and never stopped prodding police that her husband was a monster.

Don't judge an Audiobook by it's cover

Would you consider the audio edition of Evil Beside Her to be better than the print version?

Haven't read the print version, but I prefer audiobooks.

The dilemma Linda was faced with - she couldn't leave James, so she stayed with him hoping he was caught and put away for life.

What does Debbie Andreen bring to the story that you wouldn’t experience if you just read the book?

Overall, I thought she was very good.

Not an extreme reaction, but definitely felt anger towards James and could sympathize with Linda's plight.

The cover looks really cheesy but don't let that fool you, if your a true crime fan. This is a good book.

Evil in every sense

I truly find it amazing that someone has to live the life they do in fear of themselves and their child. And to think she called the police many times but no one believed her. I feel sorry for her and her daughter for the hell the monster put them through and wish them happiness in their future. May the man/monster who did this stay behind bars forever.
I made a promise many years ago to a friend that I would never talk about the horrible things her son did to people and spent over 17 years in prison for it so that promise and this book makes be believe I should not have made the promise.
I received this free for an honest review from the author or narrator.

What did you love best about Evil Beside Her?

I loved that he was finally convicted after a long time, both in actual time and during the audible story.

Would you be willing to try another book from Kathryn Casey? Why or why not?

Have you listened to any of Debbie Andreen’s other performances before? How does this one compare?

I thought that the narrator was good. I would listen to her again.

Nothing stands out but there were many little nuances that have come up since listening.

By the time that he was convicted, I was really fed up with the main character. I got very tired of hearing her justifications and how perfect and innocent she was. Her decision to stay and stay wore on me and her excuses seemed thin and pointless. I found her to be sniveling and whiny after many hours of listening.

This is a very evil man and Linda is fortunate to have turned him in!

The book was very good. The reader did a good job. That's important. I highly recommend this book.

An Exercise in Frustration

I usually like Kathryn Casey's books, but this one missed the mark. It was too much like a Lifetime "Moment of Truth" movie - you know, where the plucky heroine, unsupported by family or the authorities, risks life and limb to solve a crime, right a wrong, bring someone to justice, and so on. But staying with your husband so that you can protect your daughter from ... your husband? Linda Bergstrom's logic just didn't make sense. This book is a case where truth is certainly stranger than fiction.