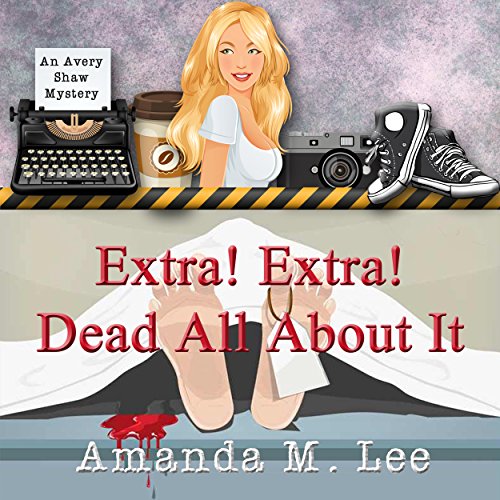 Extra! Extra! Dead All About It

The primary election is almost here, and Avery Shaw is in her glory. Her boss has unleashed her on the leading candidates - including two of whom she downright loathes - and Macomb County's leading reporter (and pot-stirrer extraordinaire) is about to turn the election on its ear.

She just needs to find a story first.

When her nemesis, Tad Lancaster, loses a volunteer, Avery sniffs out a bigger story...or at least she thinks she does. She has a pile of documents, too many insidious ideas to wrangle, and a long-suffering boyfriend who can do nothing but shake his head.

Avery is determined to find out the truth, even if it doesn't lead to Lancaster's downfall. She only has a limited time to do it, too, and the clock is ticking down to election day.

In short order, Avery has to uncover a pile of financial corruption, irritate her co-workers to the point where they don't want to steal her story, hook her ex-boyfriend up with a new girlfriend, survive family dinner, convince her boyfriend she's not chasing ghosts but rather something that's really there, and save Macomb County's election process for the people.

Oh, she also needs to figure out a way to avoid a baby shower, too.

It's all in a day's work for one hard-working and fast-talking reporter. She just needs to survive the final showdown to prove to everyone exactly how superior she really is.

What listeners say about Extra! Extra! Dead All About It

I’ve gone through all the books and I can honesty say the only reason I keep using my credits for this trash is because I’m too far into the series to not know how it ends. Also the way these “thugs” are portrayed is laughable and insulting. Is this the way the author sees black ppl? Not the first time a black person in the book has be seen as dumb (like most of the ppl besides Avery) and trouble. Also really? She’s not this bad ass that scare everyone, smh... She like a eternal teenager who’s allowed to do adult things.

Things maybe new for Avery now stil a lot of madcap when she is around. The story she is to be doing and the one she wants to do. Her boyfriend just shakes his head. Good story and narration. Given audio for my voluntary review

Typically sequels fall into the "not as good as the prior title" trap and as the twelfth entry into this series one might expect this title to be a week addition but it is in fact a very good contender. This book is very well written and is strong enough to stand on its own without any knowledge of the prior books but I still recommend reading the prior books first simply because it adds to the depth of the stories and comments (and jokes and the various character's sundry complaints).

Even better, Angel Clark once again delivers a perfect performance for each of the main characters and the secondary characters as well. I hope that this series continues for years and years as it continues to become stronger (better mysteries and character growth are just two areas which have impressed me) over those years.

Yes. I love the Avery Shaw series. All the characters are...well...characters. The writing is done well, with lots of personality infused into every single person in the story. Amanda M.Lee always remains consistent and true to her characters. Angel Clark, has perfect timing and inflection to deliver the goods, giving each character a distinctive voice.

I don't know that any of this series keeps me on the edge of my seat, but they do keep me guessing...and laughing...definitely laughing!

Avery, of course, but I do love how she voices Carly. I wish there had been more of Avery's mom...love Angel's portrayal of her.

Yes. I listen to the whole series often.