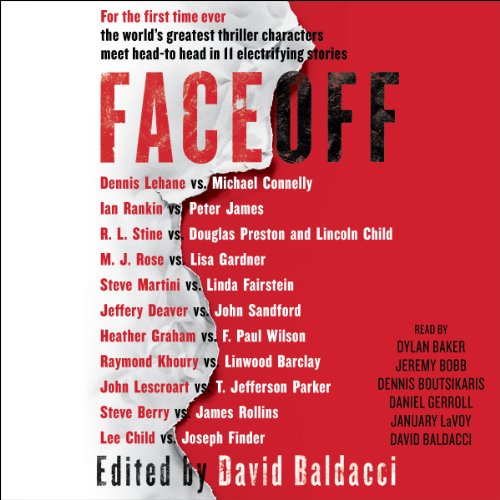 In an unprecedented collaboration, 23 of the world’s best-selling and most critically acclaimed thriller writers have paired their series characters - such as Harry Bosch, Jack Reacher, and Lincoln Rhyme - in an 11-story anthology curated by the International Thriller Writers (ITW). All of the contributors to FaceOff are ITW members and the stories feature these dynamic duos:

What listeners say about FaceOff

Great fusion and introduction of characters

I loved this book because I knew several of the characters and this was a great way to introduce me to new authors! The stories were great and the pairing of the characters were excellent. I truly enjoyed the short stories and the new characters....which I have all ready bought 3 books from 2 new authors I was introduced by thid book. I hope to see a Faceoff 2!

This collection is a good way to experience the different writing and story telling styles of some best selling thrill writers. Most of of the stories were entertaining but not great. The excellent narrators made the listening time fly by. Recommended for readers who'd like a survey of some big-name writers in this genre.

Excellent! Love the pairing of characters!

Would you listen to FaceOff again? Why?

I would definitely listen to FaceOff again. The short stories are prefect for listening in the car. Each is about 30 minutes but you may find yourself driving farther just to listen more!

I had read novels by many of these authors but it was great seeing the characters united: Cotton Malone with Gray Peirce, Jack Reacher with Nick Heller, Lincoln Rhyme with Lucas Davenport.....

This collection uses several narrators and all performed wonderfully. I loved the narrator for Michael Quinn vs. Repairman Jack. He made me think I was definitely in N'awlins.

I definitely could not stop!

I am a mystery fan and looked forward to this book. Huge disappointment. I could not get into or like even one of the stories of these otherwise great writers. It was a gimmick to raise money for their special club, and I guess in that way it might be considered successful. With Baldacci's name on the cover as editor, how could it go wrong? Not sure, but it did. It was way off the mark for this usual fan. 4/25/19

So many writers, so many well thought-out stories

I had not expected to enjoy this as much as I did - I figured it would be smushed together stories but the fun of having the characters we know work with other (sometimes genre spanning...) characters was delightful. Added bonus was the intros that gave us an insight into how the authors joined their talents to give us this book.

I am a fan of several of these writers and the stories are interesting enough to make me curious about the others. Good book.

Read because Match Up was so good

This was very good, Can’t wait to see if they come out with a third book

This was a fun, quick and easy book to listen to. The Reacher story was at the end, leaving me craving more.

I really enjoyed the mixing of characters! I will purchase their next writing venture! My favorite was Lucas Davenport & Lincoln Rhymes!

A great mix of Thrill Writers