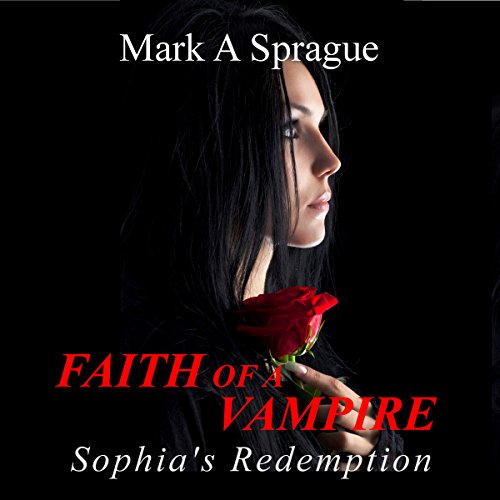 Faith of a Vampire

Written by: Mark A. Sprague
Narrated by: Susan Saks
Try for $0.00

Faith of a Vampire is a story about a woman who must learn to have faith in herself, faith in others, and faith that she still has a soul as she journeys into the ominous world of vampires.

Sophia Dobre is a young farm girl living with her family in Weston, Massachusetts. Sara Manori is a member of a powerful and influential vampire clan.

In a strange twist of fate, the two meet, become friends, and their lives are filled with adventure and mystery. But unfortunately, a vampire having a human as a companion has consequences, and Sophia unintentionally becomes a vampire.

During her transformation, Sophia learns that she has a unique bloodline which gives her special abilities as a vampire. Fortunately these abilities help to uncover a malicious plot that a rival vampire clan is out to destroy her clan over a position of power on the vampire council.

Thrust into the middle of a clan war, the battle unlocks ancient, horrifying memories buried within Sophia's bloodline. As she struggles to retain her humanity, Sophia sees her personality changing for the worst. Hating what she is becoming, Sophia looks for help.

Eventually she learns of a little-know process that can turn vampires back into humans. The possibility of becoming human again forces Sophia into a forbidden world where assassins will do anything to stop her from meeting a woman known only as the "White Swan".

By the telling of her story, Sophia reveals the truth about vampires - about their history and more importantly, about the promise of redemption that is available to all vampires if they only have enough faith and courage to seek it out.

What listeners say about Faith of a Vampire

I absolutely loved this audiobook and have to say how great the story was and just wished the author had recorded the next book in the series but for now I am thankful for this one!!!!

i enjoyed hearing a story that was not all about the dark side of vampires. This was a refreshing and entertaining perspective about vampires I have not read before. I especially enjoyed that the author perceived vampires having a soul.

Most vampire stories tend to stick to the standard tropes and clichés, and most of those try to convince the reader that they're different than the others by pointing out how they don't fall into the classic Stoker formula. This one falls right in line with that. Still, there are very few stories that I'm aware of that deal with a vampire's redemption, which is the entire reason I picked up this title. Curiosity won out.

As the opening paragraphs of the book suggest, this book is just the backstory for the character of Sophia, and the real story begins as this book ends. It leaves a lot of room for improvement and expansion. I felt like the whole of the story was rushed in the bid to get to the end of this leg of the journey, and there is a lot of it that lacks that professional polish. It feels more like something you'd read on a fanfic site. Even so, for what it is, I was entertained, and it's got enough promise that I'm curious about book 2, whenever it's available.