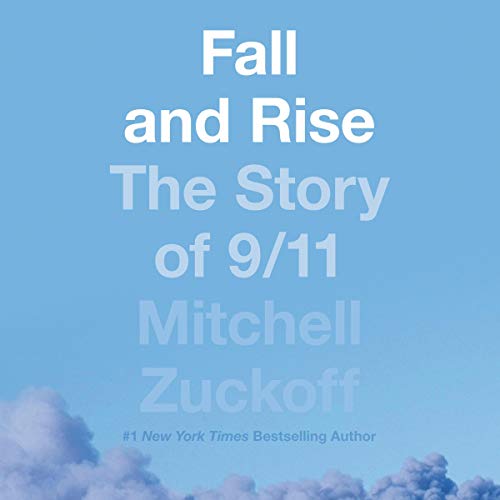 The New York Times best-selling author of 13 Hours and Lost in Shangri-La delivers his most compelling and vital work yet - a spellbinding, heartbreaking, and ultimately uplifting narrative, years in the making, that weaves together myriad stories to create the definitive portrait of 9/11.

In the days after the September 11, 2001, terrorist attack, then-Boston Globe journalist Mitchell Zuckoff led a team that reported and wrote the lead news stories and a series of pieces about 9/11 victims and their families. It was the beginning of an obsession with that momentous day and a commitment to tell its complete true story.

Fall and Rise is a 9/11 work like no other. Based on years of meticulous reporting, it gives voice as never before to both the lost and the saved. Zuckoff masterfully braids the stories of what happened in New York, Washington, DC, and Shanksville, Pennsylvania, into a mesmerizing account that details the minute-by-minute experiences of those whose lives were forever altered by that day.

Zuckoff puts us in the center of events with numerous men and women caught up in the terrible attacks - beside a young, out-of-work actor stuck in an elevator in the North Tower of the World Trade Center; among the heroes aboard United Airlines Flight 93; inside the badly damaged Pentagon with a veteran trapped in the inferno; accompanying the first firefighters on the scene in rural Shanksville; in the company of workers at offices in the World Trade Center; among a team of New York firefighters racing against time to save an injured woman and themselves; and alongside families flying to see loved ones across the country who suddenly face terrorists bent on murder.

Fall and Rise opens new avenues of understanding for anyone who thinks they know the story of that tragic day and illuminates as never before the extraordinary ordinary people from all walks of life caught up in tragic circumstances they could neither understand nor control.

Destined to become a classic, Fall and Rise is a tribute to the dead and the living and a testament to the power of the human spirit to triumph even in the darkest hour.

What listeners say about Fall and Rise

I stand in amazement of Mitchell Zuckoff for putting these thoughts and words in an unforgettable way. The way he pulled it all together and made it so interesting was well researched facts. Thank you for honoring and memorialising these Americans

Never in all the audiobooks I’ve heard have I needed to stop the recording-- frequently, to catch my breath, or to absorb, or to compose myself. The contents of this book need to be heard and absorbed and remembered. Written without sentiment or drama, the personal narratives are gripping in their stark unadorned reality. If you’re wondering if you should read it, you should. It’s an important book, presenting facts without politics. Whatever your background, it will enhance your understanding and possibly your humanity.

Outstanding in Every Way...THIS IS US!

Without a doubt, this is the most difficult (audio)book review I've ever written. Numerous times I've started writing, only to delete it all and begin again. Despite having much to say, I'm not sure how or where to start. In fact, I'm not even sure if words can express or give justice to this outstanding piece of work. It is absolutely amazing and very deserving of your attention.

In the nonfiction narrative Fall and Rise: The Story of 9/11, Mitchell Zuckoff masterfully weaves together the events of this tragic day with the personal stories of those who experienced them first-hand. No matter how much information you already have about this day, your understanding of the timeline and the happenings that occurred aboard the four hijacked planes on the morning of September 11, 2001 will deepen. As you sit beside and accompany those directly affected, you will connect with and learn about the many lives lost, saved, remembered, and left behind. From sadness, pain, and desperation to strength, relief, and courage, you, too, will share in the wide array of emotions experienced that day. And, even though the cries for help and last goodbyes may stay with you forever, it's important to remember the same rings true for the many moments of heroism you will have the opportunity to witness as lives are saved, unbreakable bonds are formed, and loved ones are reunited. By denying ourselves the realities experienced on 9/11, we are denying ourselves of who we are today, who we once were, and how far we've grown as individuals and a nation. As stated in Fall and Rise, "...the terrorists have already been defeated. They wanted to kill innocence; instead, 9/11 was a day when heroes were born.” The words and stories shared in this book are symbols of determination, strength, and courage shared by the American people.   While the horrible events of this day are absolutely heartbreaking and continue to haunt many still today, Mitchell Zuckoff reminds us, in the most respectful and honorable way, of what it truly means to be an American.

The audiobook Fall and Rise: The Story of 9/11 by Mitchell Zuckoff is easily one of the best books I've ever listened to. It deserves 5 out of 5 stars across the board. The narration by Mitchell Zuckoff and Sean Pratt is wonderful. Every word is spoken with clarity and complete and total control. As expected, the recording is of professional quality and free of distractions and errors. I believe my overall experience was heightened having listened to the audio version. At 17 hours and 24 min, this Is the longest audiobook I have ever listened to. It's also the first time I have taken advantage of the features provided in the Audible app, which allowed me to bookmark an unlimited number of clips and take notes alongside each one, many of which I plan to use in the classroom to supplement my lessons. It is so important to me that my high school students understand the life-changing events of 9/11, as they have contributed to who we are today as a nation, as individuals, and as citizens of the world. I recommend this audiobook to everyone, teens on up.

Because it would be impossible to share the thousands of stories and acts of heroism in one book alone, let the ones here serve as voices for them all. They deserve to be acknowledged and recognized...they deserve our attention...they deserve to be heard. Each voice is a representation and reminder of who we once were and who we are today. This book makes me proud to say I am an American. I'm confident you will feel the same. THIS IS US.

Thank you for reading my review. I hope it was helpful. :-)

**Also, I love the pdf that comes with the audiobook, so make sure to download it; it's filled with great information.**

I feel as though I’ve made several new friends, and mourn for those I’ve lost. Being in NE on 9/11, like others, I watched helplessly and confused. 18 years later, I feel I understand the terror of these amazing heroes. Make no mistake, each and every man and woman...are heroes.

Performance was truly outstanding and in no way detracts from the poignancy and emotion, but rather transported me to lower Manhattan....to Shanksville, PA...the Pentagon.

Do yourself a favor and purchase the hard copy for your library. This no nonsense approach to the personal experience avoids the political arm chair quarterbacking and conspiracies, choosing instead to state for the record the facts, told through first hand stories and recordings.

Everybody should read / listen to

If you were here for 9/11, you should read / listen to this book. If you were not, but have even the slightest interest in understanding “Never forget”, you should read / listen to this book. At times I found it difficult to listen, because of the pain it evoked. However, that only made me more motivated to listen. How could I stop listening to what all of these victims, survivors, and heroes endured? Thank you, Mitchell Zuckoff. I will listen again and recommend to others.

This is a highly emotional, haunting, but excellent re-telling of the events on 9/11 on a very personal level. It has taken nearly 20 years for me to be ready for something like this. Writing and narration are superior.

Having been in New York on 9/11, I immediately wanted to listen to this book. So very glad I did! And so very glad Mitchell Zukoff read his book. Don’t believe anyone else could have read it better. Thank you Mr. Zuckoff for your years of research, and your kindness in telling the stories from all aspects of that day. Thank you.

This book is the definitive story of the historic events of 9/11/2001. It was well told so well and brought to my mind the realities and events of that day. Well done, Mitchell Zuckoff.

I was 10 years old on a September 11th and while I understood that it was a significant event, I did not have a true sense of the magnitude of the lives that we’re impacted. This book brings the raw, horrific emotions of 9/11 to life. The attention to detail is outstanding, from the horrific descriptions of those who perished to the haunting accounts of families who will never again be whole. This book was mesmerizing and life-changing. It is a historical masterpiece and will be read for years to come by future generations to help paint the picture of the emotional toll that day took. The accounts in this book will also forever be a symbol of American strength and bravery, as it shows the world how complete strangers became blood brothers and sisters in the darkest of times. It will also be a symbol of American resolve and show the world that terrorism never truly wins. I really enjoyed this book, and looked forward to every individual story. I highly recommend it, and this is definitely my must-read of 2019.

The author notes that he wrote this book for his children and a generation as disconnected from the events of 9/11 as they were from WWII. I am one such member of that generation, too young and distant at the time of the attacks as a 12-year-old in faraway Texas, not knowing anyone personally effected by the tragedy, never having heard of the WTC or the Pentagon, and not fully able to comprehend the domino effect that would span decades and ultimately shape the world we live in today.

Zuckoff skillfully and poetically weaves together the harrowing tales of victims, survivors, and heroes alike in a way that gives a very intimate weight to the cold hard facts of the day.