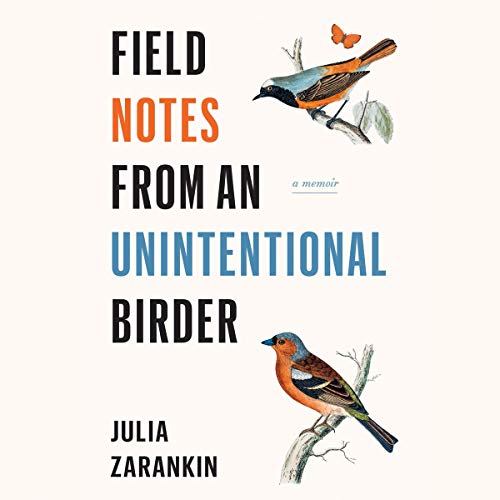 Field Notes from an Unintentional Birder

Written by: Julia Zarankin
Narrated by: Nan McNamara
Try for $0.00

When Julia Zarankin saw her first red-winged blackbird at the age of 35, she didn’t expect that it would change her life. Recently divorced and auditioning hobbies during a stressful career transition, she stumbled into birdwatching, initially out of curiosity for the strange breed of humans who wear multi-pocketed vests, carry spotting scopes, and discuss the finer points of optics with disturbing fervor. What she never could have predicted was that she would become one of them.

Field Notes from an Unintentional Birder follows the peregrinations of a narrator who learns more from birds than she ever anticipated, finding new meaning in midlife. Coming from a Russian immigrant family of concert pianists who believed that the outdoors were for “other people”, she recounts the challenges and joys of unexpectedly discovering one’s wild side and finding one’s tribe in the unlikeliest of places. Not only does she come to identify proudly as a birder, but birding ultimately leads her to find love, uncover a new language, and lay down roots. Her thoughtful and witty observations about that journey illuminate the joyful experience of discovery and offer keen insight into what it takes to find one’s place in the world.

What listeners say about Field Notes from an Unintentional Birder

is birding for the birds

Being a novice birder still after 6 years of weekly birding trips around the GTA it was remarkable how comfortably I felt listening to the authors recounting of her birding adventures.

I liked Julia’s honesty about herself in all respects of her life. I disliked the part about pianos because it wasn’t about birding. It helped me understand how the book would sound to a non birder. My husband is now aware he is a SOB.

Made me feel better about all the birds I’ve missed

This is my favorite bird book, and I have read so very many. Finally a birder who is honest enough to discuss all the frustrations along with the moments of joy. I smiled throughout!!

Such a fantastic story from one birder to another. Loved every moment of it! Taught me a few things and gave me some lessons to bird by.

This beautifully written and narrated book showed me that I am not a birder. Guys should be aware this is a book for women.