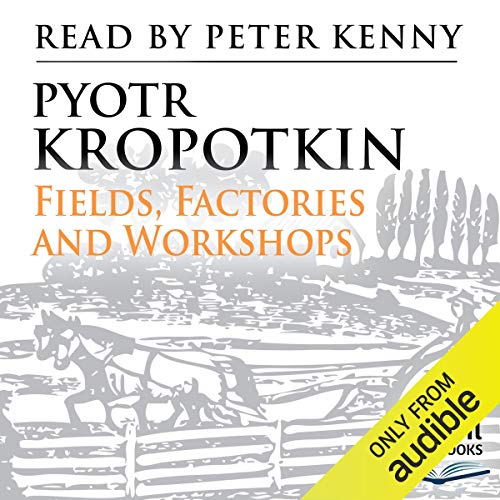 Written by: Pyotr Kropotkin
Narrated by: Peter Kenny
Try for $0.00

Pyotr Kropotkin (1842-1921) was one of the most interesting figures to emerge from the Russian Communist movement, developing the path of Communist Anarchism: he was not associated, either in theory or practice with the violence associated with that time of great change. Born into a Russian aristocratic land-owning family, he was affected by the injustice he saw as a young man on his father’s estate and committed himself early to social change; but his study and interest in science, geography, anthropology and philosophy enriched and broadened his political views.

Fields, Factories, and Workshops (1898) was one of his three most important texts (along with The Conquest of Bread and Mutual Aid - also available on Ukemi Audiobooks). Its subtitle - Industry Combined with Agriculture and Brain Work with Manual Work - indicates that although he starts from a Marxist standpoint, concerned with the exploitation of the wage labourer and the inequality suffered by the majority of the social classes, he was equally concerned with the 'human needs of the individual’.

Kropotkin argues that science of political economy should acknowledge that the life of the human being went beyond the narrow presentation of him as a wage-earning, labouring worker.

‘Man shows his best when he is in a position to apply his usually varied capacities to several pursuits in the farm, the workshop, the factory, the study or the studio, instead of being riveted for life to one of these pursuits only.’ A crucial observation in Kropotkin’s time, this is equally relevant to the 21st century!

Fields, Factories, and Workshops is a collection of essays written between 1888-1890. It opens with ‘The Decentralisation of Industries’ and continues with ‘The Possibilities of Agriculture’ and ‘Small Industries and Industrial Villages’ and concludes with ‘Brain Work and Manual Work’. Kropotkin discusses in some detail statistics of economic activity in the UK and Russia as well as mainland Europe - Germany, France, etc. He looks at trade and manufacturing, import and export, its growth and change during the 19th century and its effect as industrial development takes an increasingly strong hold on societies. And in his conclusion, he warns, ‘Are the means now in use for satisfying human needs, under the present system of permanent division of functions and production for profits, really economical? Do they really lead to economy in the expenditure of human forces ? Or, are they not mere wasteful survivals from a past that was plunged into darkness, ignorance and oppression, and never took into consideration the economical and social value of the human being?’

PLEASE NOTE: When you purchase this title, the accompanying reference material will be available in your Library section along with the audio on our Desktop Site.

What listeners say about Fields, Factories, and Workshops

A must read for anyone looking to understand the Left in general and Anarchism in particular.

Not Applicable to 21st Century, Still Worth Read

The agricultural revolution of 1900s renders most of book irrelevant. Still, good analysis on 1800s