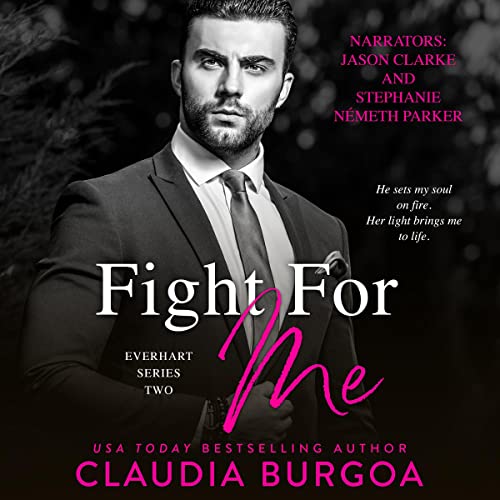 He’s my brother’s best friend.
I’m his opposite in every way.

Being a pencil pusher isn’t what I had in mind when I joined the FBI.

So when I finally get a chance to prove myself, I won’t let anyone mess it up.

He’s quiet and lethal - but also incredibly loyal. Harrison doesn’t mind bending the law to get things done. He’ll do whatever it takes to do the right thing.

And that may just mess up my big break.
I know he’s willing to fight with me, but if I give him my heart will he fight for me as well?

Fight for Me is an opposites-attract, military romance with action, adventure, and plenty of steam. This angsty listen is both fun and emotional, as Luna and Harrison bring justice to the bad guys and heat up the bedroom. This is the second book in the Everhart Brothers series by USA Today best-selling Author Claudia Burgoa.

(Originally released on 2017 as Fervent)

What listeners say about Fight for Me

These Everharts! Harrison is definitely my fave and his and Luna’s book is the freaking bomb. Jason Clarke was the perfect Harrison and he performed him amazingly. Stephanie Nemeth Parker is Luna to a T. You could feel their chemistry through the superb narrating and the authors words. So perfect.

Ooh, this was angsty but so much fun to read as we get Harrison and Luna in an opposites-attract totally hot story. It's suspenseful and exciting and even though it's a slow burn, you can't help but read until the end because the chemistry is just amazing. One of the narrators is new to me and I loved what she did with the character and bringing her to life. Both narrators really make the story pop and felt as though I was right there with them.

What a delightful surprise this book was! I thought I was prepared, with my box of tissues handy, like I usually do before I start one of Ms. Burgoa's books. Harrison and Luna's story was much lighter, but just as thrilling, heartwarming, and passionate. It was everything I want my romance stories to be. Luna is a real conundrum. She is smart, fearless and tough, but then she is also sweet, sunshine and superstitious. She is a sexy puzzle that draws Harrison in right from their first hilarious meeting. Luna's brother, Tiago, has asked Harrison to watch over Luna while she is in New York, making her off limits. It isn't hard since he has kept his distance from relationships after losing his parents in the Twin Towers tragedy. He is only close to his brothers and best friend, Hazel. Their tight knit group is supportive, hilarious, and essential. When Luna easily assimilates into the fold, Harrison is helpless against his growing feelings. Harrison is a huge surprise to Luna as well. He is charming, sweet, and attentive. He supports her decisions, and their chemistry is explosive. I love them together! There are reasons for her visit to New York that develop in surprising ways and along with a few twists and turns, this journey is exhilarating. It is fun catching up with the Everhart family along with the bad@55 men in the security agency where Harrison works. This is such a fun, refreshing story that took me by surprise, when Ms Burgoa usually wrings every emotion out of us, along with several tissues. But it is a wonderful story in it's own rights. The storyline is intriguing with strong characters, little angst, enough mystery and drama to keep me turning the pages and the perfect amount of romance to make me swoon.
I loved this story even more after listening to Jason Clarke, and Stephanie Németh Parker's stellar narration! I always enjoy Clarkes' performances, but this is my favorite one yet. He nailed Harrison's character so perfectly and his inflections were spot on and heartfelt. He took my breath away as he brought out all the fun, sass, and emotion from Burgoa's story. This is my first listen to Stephanie Németh Parker's work and I was completely lost to her performance. Her smooth, sweet voice pulled me in right from the start, but it was her authentic accent and her fierce inflections, when needed, that made me an instant fan! I will definitely look for more of her work.
The Everhart family and friends are amazing and endearing and I can't wait for more about all of them!