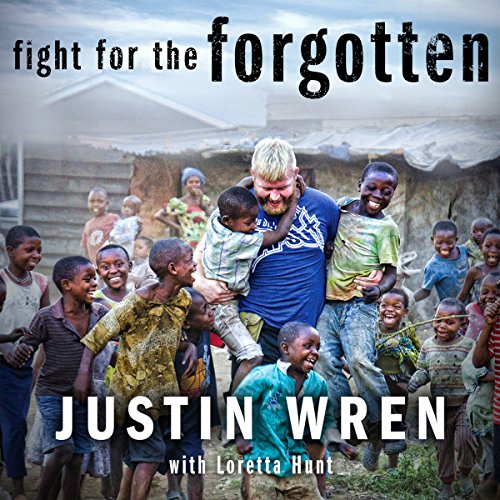 Fight for the Forgotten

Justin Wren knows what it's like to feel like the world is against you. Like many kids, Justin was bullied as a child. Fueled by the anger he felt toward his tormenters, Justin trained hard and propelled his dream of becoming a UFC fighter into reality. But the pain from his childhood didn't dissipate, and Justin fell into a spiral of depression and addiction, leading him on a path toward destruction. After getting kicked out of his training community, his career was in shambles, and he had nowhere else to go, so Justin attended a men's retreat, and it was there he found God.

Justin joined several international mission trips that opened his eyes and his heart to a world filled with suffering deep in the jungle of the Democratic Republic of Congo. There he came across the Mbuti Pygmy tribe, a group of people persecuted by neighboring tribes and forced into slavery. His encounter with the Pygmy tribe left him wondering who was there to help them, and in that moment Justin stepped out of the ring and into a fight for the forgotten.

"Justin's story is an example of what any man or woman can do when they discover and embrace who they are and what they are made for." (Bob Hamp, author of Think Differently - Live Differently)

What listeners say about Fight for the Forgotten

This is a very entertaining book. It held my attention and kept me coming back for more. I would recommend this book to everyone.

Everything about Justin Wren’s book is amazing. It is captivating, heart warming, inspiring, truthful and believable! I laughed and I cried (a lot). My only suggestion is to have a box of tissues nearby.

This book was recommended to me by my adult-MMA fighting-son. We’ve both recommend it to everyone we know.

Additionally, the narrator did an excellent job.

Absolutely amazing, very inspiring, and a must read for struggling religious people, I was amazed.

Amazing and inspiring story! Thank you Justin for your faithful service. I pray that your work will encourage us all to be the hands and feet of Jesus!