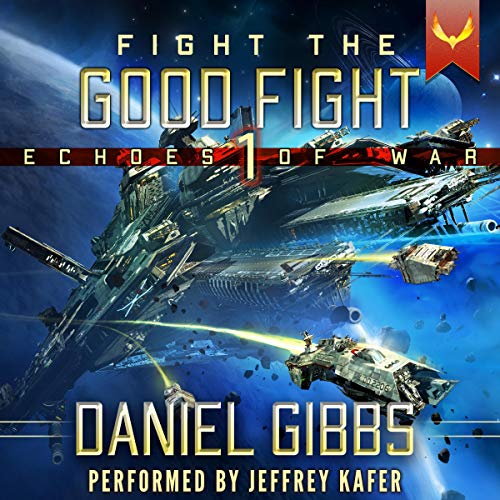 The Terran Coalition faces repeated and brutal attacks from the repressive League of Sol. To defend his home planet, David trades his dream of becoming a rabbi for a battlefront in the far reaches of space. When particle beams fly, his courage under fire brings quick promotion. But in the lulls between battles when he must confront his soul, David finds a different enemy: the ghosts of those killed under his command.

Yet in war, it’s kill or be killed - and the enemy shows no mercy.

David must square the tenets of his faith against his responsibility to crew and country. If he fails in his command, billions face enslavement by a ruthless regime. Now it’s an all-out fight for the galaxy’s freedom.

Because a man’s greatest foe lies within.

If you love Babylon 5, Safehold, and Destroyermen, you must listen to Echoes of War, a military sci-fi series that will take you to the heart of duty, sacrifice, and the unseen scars of those who serve.

What listeners say about Fight the Good Fight

Not your typical SciFi tromp

This book is different than most sci-fi I’ve consumed. The action is sparse and really only serves as a vehicle for discussing matters of faith and duty in armed combat. As a person of faith I enjoyed the change of pace and details of the various peoples and faiths represented. I would not recommend this book to anyone looking for your typical action packed shoot em up nor to people that are turned off by Godly discussions. I really enjoyed Jeffrey Kafer’s narration and would definitely get a book narrated by him again.

I loved this book. The story was interesting and the narration was great. I'll definitely check out the rest of the series.

Okay, first of all, seeing that "Book 1" in the title gets me giddy. I cannot wait for the rest of this series. Kafer continues to perform these kinds of books with absolute excellence, and Daniel Gibbs (an author completely new to me) has spun a great tale worthy of many books.

When I find a good audio book series, I avoid the written version, because I listen while I do long distance walking. Having a series of books to distract from the humdrum is invaluable. So, I have not read books 2-6. I am going to wait impatiently for them to become audio books.

I loved this story of a soldier who must test his faith against not only the marketplace of ideas, but in life or death choices. Some may find the story line preachy, but as person of faith myself, I tolerate a great deal of postmodern preaching in other writing. This is a story of a good man forced to do hard things to protect his family and his freedom.

Not your common story but a most enjoyable book where good and evil clash and where duty and honor triumph. That sounds like the typical space opera but this book highlights those familiar themes in a unique way.

A refreshing take from the standard space sci-fi. will be giving as a gift.

FtGF, is the first audiobook in the Echoes of War Series. There are already 6 books in the series and 3 books in the spin-off series Breach of Faith. Given the titles of the books and the series, Author Daniel Gibbs takes his faith seriously. Yes, the main character is Jewish and yes he speaks about his faith from time to time; however, more often than not, it is to explain how he internalizes taking the lives of his enemy and how that is opposite his desire to become a rabbi. As with most series the first book is more of an introduction to the universe and characters and FtGF is a bit slow at first, it picks up about mid way through and begins to sprint at the end, ensuring you are ravenous for the next book. The religious parts seemed "pushed" at times but I eventually found the religious parts instrumental to the story and the characters development. Overall, I really liked the book and I look forward to more books in the series.

Enough said, if a book is good enough to make me cry, it gets an automatic 5 stars.

Looking forward to this new series

I can't say it's the most original plot, but I do so love my space operas which tell military stories about our future in space. I do like the religious emphasis as it opens doors to complications and character development that lost series overlook. I was excited to go spend my lone audible credit to discover that book two isn't on audible yet. Doh! Oh well I'll definitely be ordering it when it is.

Fight the Good Fight is a military science fiction story on the surface. You quickly learn this is a deeper human story at its heart. Daniel Gibbs takes you to the front lines of an intergalactic war, while showing you the personal side of the men and women fighting it.

David Cohen is an Orthodox Jew that despises killing and is placed in charge of a space battleship. That is the personal internal conflict the characters of this story have to deal with.

If Tom Clancy wrote military science fiction, this is what it would read like. The operation of the starships reads like you are on the bridge of a modern battleship during combat. Very detailed, realistic, and puts you in the middle of the action. Unlike most MSF these battles unfold slowly and with a purpose. I kept turning the pages to see what happened next.

Fans of Battlestar Galactica, Tom Clancy, or Jay Allen will find much to enjoy in this book. Future books in the series are just as good and keep introducing interesting original takes on the genre, make sure to keep reading.

Jeffrey Kafer narrates the audiobook. His even tone adds the right amount of emotion to captivate you while listening. The cast of characters come from many nationalities and Jeffrey does a great job of adding accents to represent them, without making it cartoonish.