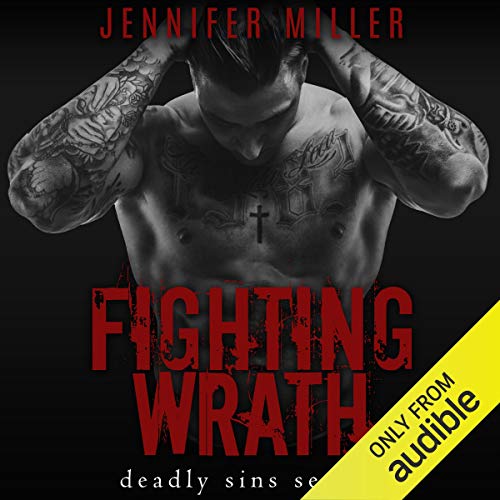 They say that holding on to anger is like drinking poison and expecting the other person to die. I hold on to it anyway, letting it consume me, as it slowly devours everything I am. I fight to hide my ugliness from the world. Until I meet her. She's a soothing balm to what ails me, softening the anger that roars within. Unknowingly, she's healing what's broken, and I'm determined to keep her - to make her mine. But what happens when she sees the monster that lies beneath? Will she stand by me? And what about the whispers that taunt my mind, telling me that she's hiding secrets of her own? Can love be built on lies, or will the embers of our secrets burst into flames, consuming us both in the end?

What listeners say about Fighting Wrath

LOVE WAS BEATEN BY CHILDHOOD PENT UP RAGE

Now that Rowan's twin brother Tyson is out of Prison he is a really thoughtful Uncle and takes time off from his MMA training each week to take his tiny niece to a local bookshop to read to her... all say ahhh. But his charming, generous and kind exterior is only the soft shell hiding Tyson's tortured soul because he has memories and secrets from his past haunting him and he's a powder keg with a very short fuse. However, he carefully hides it from everyone and has his own way of exorcising the demons... by secret illegal underground fights. Then, one day at the bookshop, his world changes when he sees Sydney, a beautiful blonde, who seems attracted to Tyson too but flatly says no to all his advances - so week after week he keeps trying..... until eventually he gets a hesitant yes.

Little does he know that he's met Sydney before... at a Strip Club when he was very drunk and she was busy working.... but this is just one of the secrets she's reluctantly keeping from him. Sydney's studying - her interest is in child welfare and that's because of the tragic and awful childhood she, and her brother, endured and now she has a lot of financial burdens laying solely on her shoulders. Sydney's reluctant to start a relationship at this point but Tyson is charming, handsome, charismatic, sexy and won't take no for an answer so she gives in to temptation and soon gets sucked into Tyson's world.

There's instant chemistry, passion and sex which soon leads to them having a close friendship and more... Sydney's proudly introduced to all Tyson's Fighter friends and also to his Sister Rowan who he loves deeply and has cared for and protected all his life. However, you know his possessive, intense and jealous nature is just waiting for the match that'll make him go boom.... and that match is sneakily lit by the MMA Groupie who's jealous and wants revenge. But nobody could have foreseen the drama, angst, chaos, devastation and heartbreak that was about to ignite, explode and destroy everything.

I did enjoy this listen but I didn't like it, or the main H/H, as much as book 1 - however there was the same camaraderie and witty banter between the Fighters which was fun. The love story had the predictable 'secret' that was left too late to sensibly explain and so, when it backfired on Sydney, I really felt it was her own fault. Tyson was a challenging Hero - he did keep secrets of his own but his heart and feelings were always open and loving. Again, what made this listen so enjoyable was the close friendship, humor and loving bond these characters have for one another - they are a tight band of loyal characters. There was a sad and heartbreaking story alongside Sydney's character and Tyson's childhood was littered with pain and grief - so these two lovers had so much in common and were perfect for each other..... but sometimes it's not love but time that'll eventually mend broken hearts. Dual POV's, a lot of internal struggles with character development, good narration and we get to catch-up with Rowan, Jax and Lilly from book 1.

Worth a credit? Yes - even though there's not a lot of sweaty testosterone fuelled fighting!!

Absolutely the best series I have read/listened to in a very long time. What an amazing couple! Well worth the purchase!

Couldn't put it down

I really liked this book!!! I didn't realize it was book two BUT I didn't lose anything by starting here. I already bought book one and starting it next!!!!

This was my first book by Jennifer Miller and I really liked it! It flowed seamlessly and had the right amount of angst, steam, and conflict. The ending was great and I loved all the characters built in also!

The only reason it didn't get five stars was that sometimes the characters would state things that I think would be better as a thought or for the reader to conclude. It wasn't often and I LOVED the story and characters so I highly recommend picking it up! I would definitely listen/read again!!!