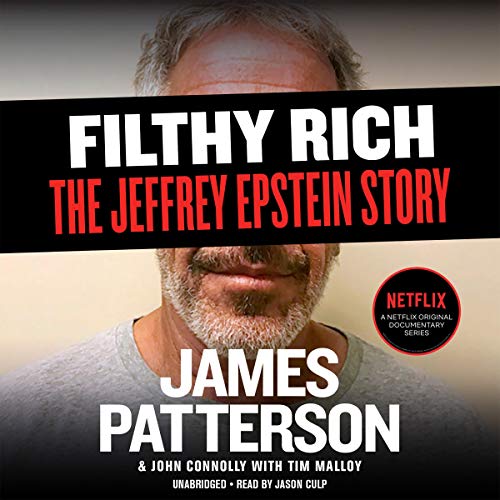 Now a number one Netflix documentary series. Get the full shocking story about billionaire pedophile Jeffrey Epstein in this number one New York Times best-selling and definitive book.

Jeffrey Epstein rose from humble origins into the New York City and Palm Beach elite. A college dropout with an instinct for numbers - and for people - Epstein amassed his wealth through a combination of access and skill. But even after he had it all, Epstein wanted more. That unceasing desire - and especially a taste for underage girls - resulted in sexual-abuse charges, to which he pleaded guilty and received a shockingly lenient sentence. Included here are police interviews with girls who have alleged sexual abuse by Epstein, details of the investigation against him, and a new introduction with up-to-the-minute developments on the case, including Epstein's death by suicide.

An explosive true story from the world's most popular thriller writer, Filthy Rich is a riveting tale of wealth, power, and the easy price of justice for America's wealthiest citizens.

What listeners say about Filthy Rich

Salute to James Patterson for sharing the truth!

Excellent book, to say the least! I never expected such great detail and at times, I found it hard to listen to some of the content but this truly shows us how money can buy anything in this world today. Unbelievable that this man has gotten away with all that he has done for so many years. The children he abused is countless! I truly salute James Patterson for having the courage to expose this man for who he truly is, as well as the people that protected him.

Not for the faint of heart

If you want to dig deeper into the perverted and depraved life of Jeffery Epstein, then go for it. If you are squeamish about lurid details of the calculated molestation of teenage girls, then take a pass.
The narration is very well done, including the sworn testimonies of the young girls.women who were the brave ones who came forward to expose this POS sex-slave trafficking of underage girls.
Yes, it is the sad reality that we all know to be the case in the USA, i.e., the rich get off and the poor go to jail. Now that the SDNY has opened a new case against one of the world's most vulgar and evil humans, it will be interesting to see how it all shakes out. All of the conjecture and rumors are just that, that is, does Epstein have compromising sex-related material on some of the most powerful people on the planet? I guess time will tell.
This is not a truly investigative reporting, trust the Miami Herald for that information. But, the book does give you a detailed overview of the players, the criminal investigators and scummy criminal lawyers like Alan Dershowitz.
If you really want to learn more, go to The Miami Herald. Investigative Reporter: Julie K. Brown is a saint, she is a national treasure. Thanks to Julie, the hundreds of victims of the absolute piece of garbage may finally see some justice.

It's sickening what the rich and powerful can get away with. Fabulously written, as always.

First part is terrible, the rest is a good

Editing this review after my initial knee-jerk reaction to the book.

This book was written by James Patterson and two actual writers. The very first part of the book is unequivocally awful. It reads like a bad airport bookstore novel (maybe something you would read on a 727) and was likely written by Patterson himself. The rest of the book is fairly well-researched and covers a lot of the very bizarre and disturbing aspects of the Epstein story.

All you need to know from the first part is there was a girl named Mary who was lured to Epstein's house in Palm Beach to give him a "massage" in exchange for money. She was very young and after the event, administrators at her school tipped off the police, initiating the investigation into Epstein. Now you can skip Patterson's godawful prose and get to the real book.

Everyone on Palm Beach knows alot juicier details than what is described in this book. Way to totally puss out on calling out the Clinton's. These were children and no one should be spared when young girls are alienated.

Would you consider the audio edition of Filthy Rich to be better than the print version?

What other book might you compare Filthy Rich to and why?

Have you listened to any of Jason Culp’s other performances before? How does this one compare?

I haven't listened to this narrator before; however, I enjoyed his performance.

Whether or not Jeffrey Epstein is guilty is clear. But there's just not enough material here for a full length book. This could've been condensed down to mayyyybe 20 mins and been just as interesting. I find myself just happy that it's over and I can move on.

A window into one America for the wealthy & another America for the poor. It saddened me to read how narcissistic wealthy men are given reign to destroy people w/impunity & those harmed are left to fend for themselves. Perhaps this book will help even the scale. But I doubt it. Just another harsh reality that those w/wealth can buy anything - even our judicial system.

Not a typical James Patterson book. very informative of a true story however. Makes you wonder about some of the rich in the world.

While very detailed, scant mention was made of Bill Clinton and the many trips

What money can buy