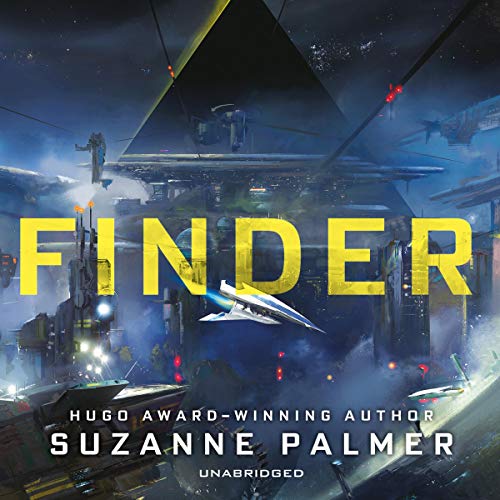 Written by: Suzanne Palmer
Narrated by: Joe Hempel
Try for $0.00

Fergus Ferguson, repo-man, has one job: find the spacecraft Venetia's Sword and steal it back from Arum Gilger, ex-nobleman turned power-hungry trade boss. Finding Gilger in the farthest corner of human-inhabited space, a gas-giant harvesting colony called Cernee, was easy. The hard part will be getting past a field of space mines, hacking into the Sword's compromised AI, and fighting a crew of hostile enemies to take control of the ship.

But when a cable car explosion launches Cernee into a civil war, Fergus finds himself caught in the crosshairs. Repossessing the Sword requires him to side with Gilger's enemies, risk death, and get abducted by aliens. Fergus must learn to set aside his pride - and confront a past he's been running from his whole life - in order to take back the Sword and simultaneously save Cernee from destruction.

"It has been a long time since I enjoyed an SF novel this much. Finder is a raucous good time! Suzanne Palmer's Fergus Ferguson is charming, imperfect, always in trouble, and a most resourceful rogue. I can't wait for his next adventure. Characterization at its finest. Firecracker dialogue. Suzanne Palmer had me hooked, charmed, and howling with delight by the end of the first act. Finder is a marvelous first novel. Bravo all the way around." (W. Michael Gear, New York Times best-selling author of Outpost)

What listeners say about Finder

Not a bad way to zone out or kill time. Story seems drawn out at points however the plot isn’t bad. The main character seems a bit too “Ho hum” being a professional finder all his life.

this was pretty bad

The book pretends to be be hard sci fi, but it falls oh so short. full of cliche characters and locales. completely missing the point when talking about distances in space. the scale of the locales is way way off. ships stop moving when they turn off their engines. even the purchasing power of money is crazy off the scale. e.g. a character who can book illicit interstellar travel is suddenly so poor, they have to pay attention to their water allowance on Mars. I can go on.

Great story idea, but the prose is weak and amatueurish, and the inconsistent tense is jarring. The author has no grasp of basic physics. You can’t “swim” through the air in zero gravity, and turning a space ship’s engines off doesn’t make it stop. Just, no. Needed more basic research and revision. The sequel being published one year later shows just how little effort this author puts into writing.

But the performance is what really kills this audiobook. The narration is flat and dull, all characters seem to have the same voice and tone, and the narrator can’t seem to be bothered to turn the energy up beyond 3 even during a space gunfight outside a space station. The characters talking in battle sound like they’re debating the finer points of doilies over a cup of tea, and when the “bad guy” is furious, he just seems to talk slower. Unbearable. Couldn’t get past chapter 13. Sent back.

The narrator was good. The story was ok. It started out promising but ended with unfulfilled potential. The first half of the story is well thought out and has so much promise. When it took a sharp turn I initially thought it was going to go someplace really great. It did not. The main character bumbled along in a non linear direction to the same end. There were so many possibilities but none of them developed into anything interesting.

Started out strong, but I just lost interest halfway through.
Nothing new or exciting. It was fine for a free book, but I would not buy it.

sci-fi for the next generation

I love that this book has action and heart and wit without formula. Suzanne Palmer's characters are entire people, complicated, flawed, and believable.

I wanted to enjoy this book. It had the ingredients to be really good. I found it a challenge to finish it - maybe a bit drawn-out.

Got into the story only to hear the characters getting kicked and beaten.

Disappointed and will delete this from my library

This was a good book to just escape into. However, I did not find it compelling or particularly engrossing. It was just something to listen to while walking the dog/