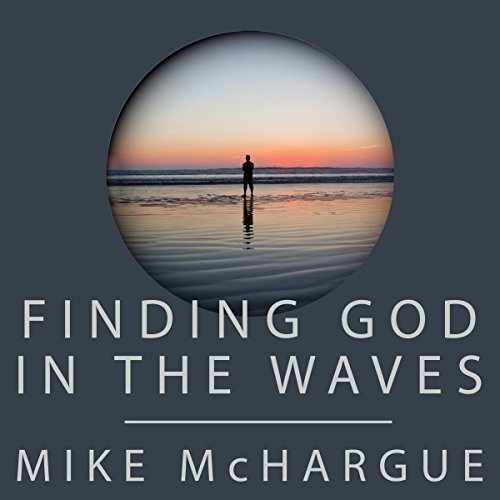 Finding God in the Waves

What do you do when God dies? It's a question facing millions today, as science reveals a universe that's self-creating, American culture departs from Christian social norms, and the idea of God begins to seem implausible at best and destructive at worst.

Mike McHargue understands the pain of unraveling belief. In Finding God in the Waves, Mike tells the story of how his Evangelical faith dissolved into atheism as he studied the Bible, a crisis that threatened his identity, his friendships, and even his marriage. Years later, Mike was standing on the shores of the Pacific Ocean when a bewildering, seemingly mystical moment motivated him to take another look. But this time, it wasn't theology or scripture that led him back to God - it was science.

In Finding God in the Waves, "Science Mike" draws on his personal experience to tell the unlikely story of how science led him back to faith. Among other revelations, we learn what brain scans reveal about what happens when we pray; how fundamentalism affects the psyche; and how God is revealed not only in scripture but in the night sky, in subatomic particles, and in us.

"[ Finding God in the Waves] may offer much-needed hope that Christianity and science can coexist." ( Publishers Weekly)

What listeners say about Finding God in the Waves

One of my favourite books.

Mike’s story gave me life. His journey through faith and doubt gave words to questions I didn’t know how to ask. This book will forever be one of my favourites based on how much it impacted my heart. Loved listening to Mike read it.

This book challenged me to think outside the "God" paradigms that I've known my whole life. I liked the personality in the book, it wasn't just the author telling me a bunch of things, everything was woven into his journey. An excellent read (or listen). #Audible1

Must read for the modern Christian

A fantastic and authentic introspection from a deep thinking science nerd, who is discovering God all over again.

This book describes many struggles that are similar to those of many people. I saw myself reflected in some parts. And in some other parts, I saw a path I haven't walked but could: a challenge is some sort. Thank you, Science Mike, for opening your mind and your heart for us to learn from your experience.

A warm and informative story that offers love to atheists, evangelical Christians, and everyone between.

For those wrestling with the Christian faith

I'm a big fan of Science Mike's and have listened to his podcasts from the beginning. Most of what's in the book isn't new, it's all in his podcasts and interviews. But the book takes all of the little nuggets that I've heard over the course of countless hours and compiles it into one place and expands on all of it.

I love Mike's humble tone and genuine search for truth and beauty. I relate to so much of his story and I appreciate that he is willing to share his story with such honesty and transparency.

Finding God In The Waves is encouraging and challenging and I recommend it to anyone wrestling with faith and doubt. Another similar book that fans of this one might enjoy is Searching For Sunday by Rachel Held Evans.

Perfect book for what I’m currently going through. I cried many times while reading this.

finding God in the waves s

I really loved this book and was happy that the narration was done by the author himself. I have struggled for most of my life with the science and the story of Christianity creating such cognitive dissonance in my head. I feel full of joy in all of nature and it is all coming together as I relax about needing to know "truth". This book reinforced my desire to embrace the mystery and enjoy the party! Thanks for pulling it all together in a great read.

Difficult subject matter dealt with openly and honestly without preachiness. Very well written and more powerful being read by author!

I love Mike, and his heart for people. As a long time follower of his work, I wondered if I would find anything new in this book. I was pleased to hear more details of the story I already knew, and excited to hear brand new insights and information. Love him, love the book. Can't say how much this helps me feel more normal.

This book does a fantastic job of bringing science and faith beautifully. I love the very personal stories that Mike was willing to share. This book very well maybe my new favorite.

SPOILER WARNING:
This was a good and interesting book and I enjoyed it. However as someone raised in the church who one day saw so much BS and bailed I was hoping for a lifeline, something to give me hope. The fact that God speaking directly to the author was his way of finding religion again was deeply deeply frustrating and left me with less hope than before.

Not sure the book had the desired impact

I was expecting a book that uses science to support the existence of God. Instead you get the author rambling on about being an atheist and coming back to faith in an unorthodox manner. He does so by redefining how he views God and the Bible which I found very strange. It was an interesting take but really makes you question your faith more than strengthening it.

Mike you are awesome

Thank you so so much for writing this. So what I needed as I am struggling with my faith after growing up evangelical… trying figuring out what the Bible is and how it works in the ways you describe. I’m 40 and I’m deconstructing 35 years of previous faith and trying to reconstruct and I’m enthralled by learning about how science and faith can go together. It can be a very lonely place and your book was monumental for me in feeling less alone and gave me so much hope. And Van Gogh is my favorite artist and the way you talked about him really put icing on the cake for me! Amazing book, so well written, a beautiful work. Thank you so much.