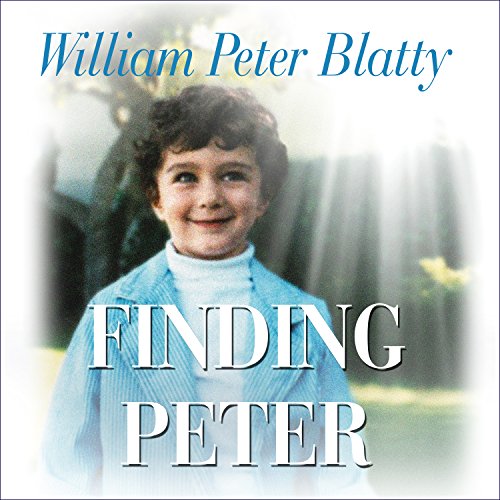 William Peter Blatty, the best-selling author and Oscar Award-winning screenwriter of The Exorcist, lived a charmed life among the elite stars of Hollywood. His son, Peter, born over a decade after The Exorcist, grew from an apple-cheeked boy into an "imposing young man with a quick, warm smile". But when Peter died very suddenly from a rare disorder, Blatty's world turned upside down.

As he and his wife struggled through their unrelenting grief, a series of strange and supernatural events began occurring, and Blatty became convinced that Peter was sending messages from the afterlife. A true and unabashedly personal story, Finding Peter will remind those in grief that our loved ones truly do live on.

"The author of the scariest movie ever made is also an endearing writer and laugh-out-loud hilarious. This book is as entertaining as it is profound." (Dinesh D'Souza, author of Life After Death: The Evidence)

What listeners say about Finding Peter

I listened for hours thinking the story would get to his son and it went on about the author with no mention of anyone except him. I thought I had the wrong review so I backtracked to make sure. No idea why I listened so long. Confused still and deleting.

If it were more of Chapter 13, perfect; but, OMGoodness for me it just dragged on and really missed the mark of the title. I wanted to love it. I am really sorry that I didn't.

I was not aware that Mr Blatty had extensive experience in Hollywood and screenwriting before he wrote his bestselling novel.

Somehow I felt Mel Foster’s narration did not pair well with Blatty’s autobiography. Of course, that’s just my opinion.

Great book. Very funny yet cuts to the heart.

Excellent. Easy listen.The author shares his story in an open and human manner. A great many laughs.This brightened my days.