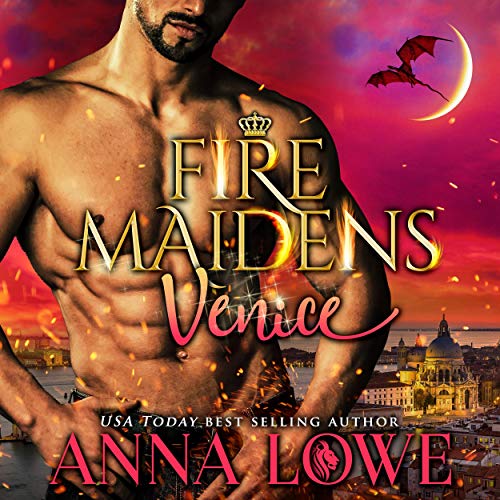 Written by: Anna Lowe
Narrated by: Kelsey Osborne
Try for $0.00

Ten years ago, lion shifter Tony Pelligrini was forced to flee Venice after being framed for a murder he didn’t commit. But now, a mysterious force is drawing him back. Is it the feeling of a ticking time bomb only he can defuse? Or, is it the call of destiny, promising true love?

Wetlands ecologist Cara Alari would rather stand knee-deep in mud than dress up for a fancy ball. But in the course of one crazy carnival night, a family she loves is imperiled, and she is unwittingly drawn into a dangerous world of power, politics, and royal intrigues.

Before Cara knows it, she’s putting her black belt to use as a bodyguard - and teaming up with a hunky lion shifter straight out of her dreams. The chemistry between them is off the charts, but there’s no time for amore. Somewhere in Venice, an enemy lurks, targeting the royal shifter elite. Because carnival masks can disguise faces - and evil intentions - nothing is as it seems. All Cara can be sure of is that her heart - and a young woman’s life - are at risk.

Danger lurks over Europe, where a ruthless dragon clan plots to seize power in the grandest, most glamorous cities. The guardians of old have summoned a new generation of shifter heroes to protect the castles, cathedrals, and cobblestoned streets of their ancestral homes - and to seek out the last of the Fire Maidens, women coveted by the dark lords for their royal blood. Those women are absolutely off-limits to the young warriors tasked with protecting them. But destiny, of course, has other ideas.

A series of sizzling paranormal romances with adult content. Dragons, wolves, lions, and more! Each story is a pause-resister packed with action, emotion, and romance! No cliff-hangers. If you like smoldering hot shape-shifters, military heroes, royal intrigue, and a hint of magic, you'll love these books.

Join these strong heroines and their alpha heroes in atmospheric locales filled with danger and suspense!

Ms. Lowe has done it again! I loved this book. Each book in the series is about a Fire Maiden but each book is different. Tony is back in Venice after a 10-year absence after being framed for murder. During that time, he was in the French Foreign Legion. Cara, an ecologist, and Tony meet at a masked event. They feel a connection. Is this fate that brought him back to Venice? He also sees Fiorina, a young Fire Maiden, again. He saved her and her family 10 years earlier when her father was murdered. Trouble is on the horizon. During the event, Fiorina is the target of kidnappers. Tony and Cara work together to save her. Cara was awesome! They were both great in foiling the kidnappers' plan. Don Ercole, who is a Guardian, wanted to lock Tony up once he saw him but Fiorina, who recognized him as the man who saved her long ago, and her mother saved him by telling the truth of what happened that night. Ercole was a real b@stard but he comes through in the end.

Tony and Cara thought the attempted kidnapping attempt might be an inside job. I liked how they worked together to solve the mystery all the while falling in love. Tony, Rocco, who was at the event with Tony, and Cara were to guard Fiorina. It was funny when Cara was teaching Fiorina some self-defense moves. Tony calls for back up from one of his French Foreign Legion buddies and he got help from Theo. They end up sneaking Fiorina out from under the Guardians and took her to Tony’s grandfather Arturo's house. That old man was great! He was not intimidated by the Guardians. Ismeralda, Fiorina’s aunt, was a sneaky b!tch and I love what happened to her. I also love what happened to Cara when faced with extreme danger. This book had a very nice Fire Maiden surprise. We cannot forget about Jacqueline, a villain from previous books. She made a brief appearance in this book and will probably turn up again in her quest for power. This book will keep you on the edge of your seat from beginning to end. There was plenty of suspense as well as romance.

I love how Ms. Lowe sets us up for the next book. I highly recommend the Fire Maiden series. The book cover is awesome. I could just picture him as Tony. As always, Kelsey Osbourne did a great job with the narration.

I was so excited when I found out that a new Fire Maidens audiobook was released and dove right in! Who are we to question destiny and what plans it may have for us? In this book these two do exactly that, but destiny cannot be denied. The action and love in this book was great and now I am begging for more!

I must admit I absolutely love this series. I like how Anna pulls in the next hero into her story giving us a slight preview into what may be coming.

Cara Alari has always loved Venice, and as a Wetlands Ecologist she is trying to keep- the city from sinking beneath the waves. Her landlord convinces her to attend a ball during the famous Carnival within the city. When she got home from the wetlands all she wanted to do is just curl up and relax, but she get ready for this ball.

Tony Pelligrini is an ex-soldier from the French Foreign Legion, after running from false murder charges. He has felt pulled to the city, is it time for him to give in or can he clear his name.

The pair meet at the Carnival Ball, and manage to save someone who is important to the guardians. They get roped into playing bodyguard together, but can they solve the mystery before time is up, while keeping their charge safe?

I did receive a free copy of this audio, but Anna Lowe and her narrators have knocked this one out of the park. I doubt you will regret listening to this book.

Love, adventure, trials and tribulations lie in wait for these special people trying to do the right thing by Venice. I just love being taken to the wonderful cities and enjoy the budding romance while good battles evil. The strong confident women and the swoon worthy hero's will keep you glued to the pages just like I was when l read the ebook. This audible version really breathes life into those scenes, the narrator does a great job of this feel good paranormal adventure romance. I also recommend the whole series.

I thoroughly enjoyed the story! Tony and Cara were so sweet together. The story has an interesting twist on the Fire Maiden theme. It was a well done.

Disclosure: I received a free copy of the audiobook. I also purchased the Kindle version.

I really did enjoy this story. I was very surprised around every turn. The characters were so real it felt like I was right there with them. The scenery was so breath taking that I could imagine it picture perfect. I loved the in depth description of every scene. I don’t want to give away any of the story so read it for yourself and travel to Venice and ride the streets of water and enjoy the wonderful story telling!

Honestly, I enjoy Anna Lowe's books and Fire Maidens Venice is no exception. We are off to Venice, where Tony, a lion shifter, doesn't want to be. Well it's complicated, it's his home. Being banished is a fine Tony would rather not think of. Cara is a unique character with a surprising past. Thrown into the past Cara finds herself once again in the middle of power and politics. Will their pasts help them to unite? I voluntarily reviewed a copy of Fire Maidens Venice provided by the author.

Life comes full circle if you maintain your honor

Another hit, this one is more mysterious, yet fun. Of course, I guessed who the real fire maiden is, but not why. This is a great story and the climax is exciting. Tony is a very honorable man and it shows right from the beginning to the end of the story. Cara is into ecology, but Venice is one of those cities that will sink, if it does not make the city work with the ecology of the area.

Lovely memories remembered. Once again a totally enjoyable time listening to this book. I was transported to the islands, waterways and small streets of Venice which bought back wonderful memories. I have read and reviewed this book and have included that review below but this audible book was kindly gifted to me by the author. BOOK REVIEW Another captivating and descriptive read in this series. I could envisage myself back in Venice and seeing all the wonderful sights Ms Lowe took us too. Great characters and a wonderfully emotional plot, full of manipulation, false accusation, heroism and with family dynamics that I loved. A capable, take no crap, kick ass heroine who is a real sweetheart and then destiny fulfils itself and she becomes something special. Loved Tony all the way through. Though wronged many years ago he remained calm and purposeful, until claws were needed. Loved his lion chipping in. And the interaction between Fiorina and Rocco throughout is so cute. Cannot wait to read about Theo, what an enigmatic character. This is my honest review of this book which I read through Kindle Unlimited.

You can't go wrong with any of Anna Lowe's books and Kelsey Osborne has a wonderful voice for narrating. Fire Maidens: Venice has the romantic feel you would expect from Venice. It also has more than mystery to keep you intrigued. Grab it now and lose yourself in story.