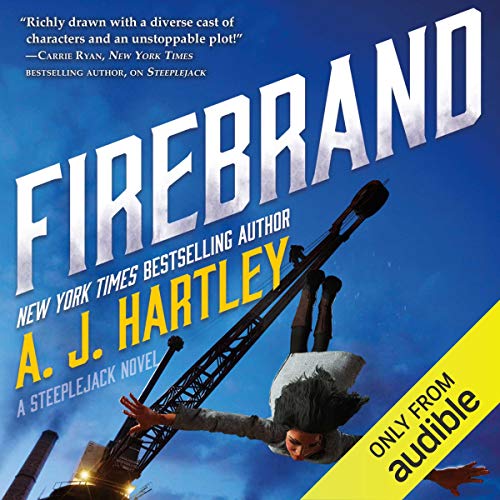 Written by: A. J. Hartley
Narrated by: Noma Dumezweni
Try for $0.00

Once a steeplejack, Anglet Sutonga is used to scaling the heights of Bar-Selehm. Nowadays she assists politician Josiah Willinghouse behind the scenes of Parliament. The latest threat to the city-state: Government plans for a secret weapon are stolen and feared to be sold to the rival nation of Grappoli. The investigation leads right to the doorsteps of Elitus, one of the most exclusive social clubs in the city. In order to catch the thief, Ang must pretend to be a foreign princess and infiltrate Elitus. But Ang is far from royal material, so Willinghouse enlists help from the exacting Madam Nahreem.

Yet Ang has other things on her mind. Refugees are trickling into the city, fleeing Grappoli-fueled conflicts in the north. A demagogue in Parliament is proposing extreme measures to get rid of them, and she soon discovers that one theft could spark a conflagration of conspiracy that threatens the most vulnerable of Bar-Selehm. Unless she can stop it.

What listeners say about Firebrand

A refreshing and original new voice!

Firebrand gets another high rating from yours truly, because it's an exceptionally original story with a unique voice.

First, the narrator on audio, Noma Dimezweni. I adore her! She truly brought Ang and all the supporting characters to life.

Secondly, as a mystery this book truly connected to the current state of events. Sometimes it even felt like I was watching news instead of reading urban fantasy. All the indicators were there: wars, unemployment, refugee crisis and the oppression of certain races based on their skin color.

Ang continues working for the young and ambitious politician, Josiah Willinghouse and his sister Dahria, and this time her task as a detective is to follow the traces of stolen plans for a devastating war machine which lead to an exclusive private club, Elitus.

Ang's choices are to give up her promising career or wear a disguise and mix with the wealthy in order to steal the plans back or to reveal the culprits.

Enter a mysterious, reclusive Madam Nahreem who takes over Ang's training to create a disguise of an exotic visiting princess from faraway lands.

This, ladies and gents, was my favorite part of the book, because it challenged Ang's perception of herself as an inferior being and forced her to grow as a character. It was also a very tense and exciting affair, and I expect her to wear more similar masks in the future.

Much recommended to fans of YA Mystery and non - European steampunk. I am looking forward to more of A.J. Hartley's unique storytelling.

A sequel that doesn't fall into the usual sequel slump. Characters remain true from their introduction in the first book and only get better. The narrator does a really fantastic job, but I do wish she offered more variety. I will give her the fact there are a lot of characters in this book, but if she'd been able to differentiate more decisively among at least the more prominent characters (especially the women), I would have given 5 stars for her performance.

Overall, still a good performance by the narrator, developed characters, and a tangled mystery make for a wonderful sequel. Looking forward to the next!

I recall enjoying the first one of these, but although listening to this volume was not painful, neither was it much more than background sound for naps, which it was good at assisting in the commencement of.