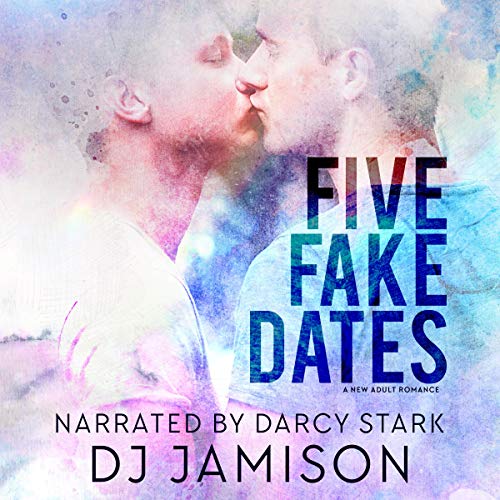 Written by: DJ Jamison
Narrated by: Darcy Stark
Try for $0.00

I've got it bad for my best friend, but he's only had eyes for my sister since we were kids. I don't know what I'll do if they hook up - especially after a drunken kiss West doesn't seem to remember. Seeing them together just might kill me, so why I offer to help him hone his dating skills, I'll never know. FML.

Ever since a drunken kiss we haven't talked about, I've been seeing Adam in a new light. Trouble is, he thinks I want his sister. This whole bisexual awakening thing is scary, and I don't want to risk our friendship by moving too fast. But when Adam mocks my dating skills, I come up with a genius plan: Five Fake Dates. Adam thinks he's helping me, and I get to test the waters without risking our friendship. Win-win!

A few fake dates, increasingly real kisses, and a tiny deception between friends. What could go wrong?

Five Fake Dates was originally written for a promotional giveaway to fans. It has been expanded to approximately 27,000 words and now has a little more spice and a bonus epilogue with HEA!

Best friends to lovers is my favorite trope. This story hit it okay for me. I love how West took his time, his introspection and his acceptance of his bisexuality.
I’m not much for fake dating trope, so I’m glad this one didn’t get dragged out. Adam was okay, I didn’t connect with his “play safe” & “push & pull” against West. For somebody who’s been in love with his best friend for years, he’s a bit too hesitant and even a bit hard to get sometimes.

It’s a short listen but enjoyable one. Darcy Stark did a good job with his narration.

I really enjoyed this!

I loved this short, sweet story so much! West and Adam were BFFs since they were kids, until one day they wanted more. What started out as fake dating to help West plan to woo someone else quickly morphed into the real thing between them! Although this was a very short book, the characters were well developed, I felt the connection between West and Adam and their love was clear! They explored all their sexual firsts together and it was so hot and so very sweet. I just loved it!
Darcy Stark is a new narrator for me and he did a good job. The pacing was good and the voices were distinct. I liked his Adam voice a lot!

It's all very real - and hot - between Adam & West

You’re hot for your best friend (and roommate) but decide to repress it because he’s straight and you don’t want to lose him as a friend. Your friend kisses you on a dare and thinks he might not be as straight as he thought and wants to figure it out by going on fake dates with you, but tells you instead that he needs dating practice so he can ask your sister out. Sound like a great premise? Hell, yeah! The heat factor was perfect, and I really liked how Adam and West navigated the relationship waters as they figured things out. The story ticked all of my boxes, and at under 3 hours it is a guilty pleasure you can enjoy in an afternoon.. Narration by Darcy Stark is flawless. Five real stars for this one!

I loved this so much!

I did a beta read of Five Fake Dates for DJ Jamison back in December when the e-book was released. I really loved it; her new adult stories are some of my favorites. I'm not sure how I dropped the ball but I never did a review of it – anywhere, let alone on this blog. Now that I've finished listening to the audiobook, I couldn't wait to do a review.

I've listened to several audiobooks that Darcy Stark has performed and I've loved all of them. I think his voice is perfect for this kind of story and he did a fantastic job with Five Fake Dates.

Friends-to-lovers is one of my favorite romance tropes and this one really touched my heart. The blurb is really good so take a look at it. I can tell you that I smiled a lot while reading this but it also really made me feel things.

Adam is in love with his best friend and college roommate, West. Adam believes that West is straight because he's been crushing on Adam's sister forever. When West finally realizes that he feels more than friendship for Adam the fake dating he proposes has some really funny things happening.

But it's not all light and funny as there are some serious moments, too. I love how it all worked out for Adam and West and the epilogue that DJ wrote for their story was wonderful. I loved reading how they were doing together 3 years down the road.

OK, I thought about it a long time before adding this bit and decided I couldn't resist. I'm in my mid-60's and I loved the fun and campy Batman TV series when I was young. Every time I wrote Adam and West for this review it made me giggle a bit. For the younger crowd: Adam West played Batman on TV.

one of my favorite tropes

I love a good friends to lovers story. I liked the unique twist on the will they won't they. For a quick listen it had all the neccessary elements and delightful resolution.

I liked it a lot

I liked the characters and I liked the story. I really like how it all played out and that it wasn’t predictable. There where moments I thought were going to be predictable but they weren’t. I admit that when I first downloaded it I was disappointed that it wasn’t longer but I was wrong, it’s the perfect length for this story. It was really good and I recommend this book.

Really cute short story. I thought the narrator did a great job too. Definitely worth the listen.

First a disclaimer, *** I received a copy of this audio-book in return for an honest and fair review***

I selected this from a list of choices because I needed a “palate cleanser” after several darker, more serious titles. Two buddies who have been college room mates for a year, after growing up next-door to each other, sounded like just the ticket. Turns out it was a great choice!

The idea that two life-long friends could make their lives this complicated through miscommunication, does stretch one’s credulity a bit, but overall, the book accomplished the goal I had for it,.. to entertain.

Narrator Darcy Stark does a mostly great job of voicing both guys but seemed a bit tentative when first voicing the over-analytical Adam. As soon as I heard him voicing West, I assumed that West’s voice was Darcy’s normal voice and Adam was a character voice that he was, perhaps, over-acting a bit. With that in mind, by chapter two, both voices were fine. Imagine my surprise when in listening to the end credits it became clear that I was mistaken in my assumption and Adam’s voice is narrator Darcy’s real voice.

Jamison does a good job of taking tropes (here it’s friends to lovers and fake relationship) and elevating it to so much more. Great characters here. Excellent narration.

Super cute and sweet! I can already tell I'll be re-listening to this story on those days that I just need something quick and cute to hear.