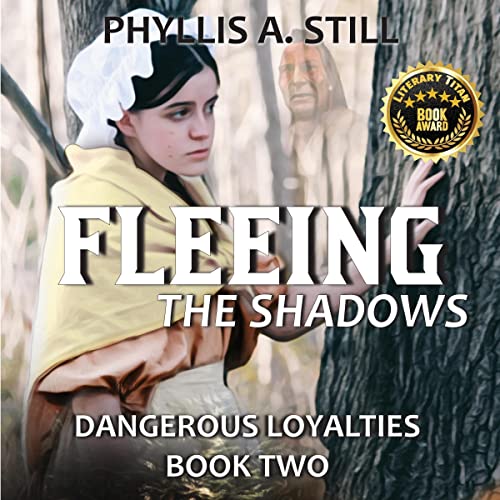 Written by: Phyllis A. Still
Narrated by: Angelina Kelly
Try for $0.00

She blames herself for the bounty on Papa's head.

Book Two in the Dangerous Loyalties series - a historical novel for teens - continues the riveting story of Daughters of the American Revolution patriot Mary Shirley McGuire.

It's late summer in the Alleghany Highlands, 1775. Colonial Virginia has resolved to support the American Revolutionary cause for liberty. The British are determined to retain control of the fur trade and keep frontiersmen fighting Indians instead of joining the Continentals.

Thirteen-year-old Mary Shirley is still recovering from emotional wounds inflicted when she risked her life delivering traitorous dispatches. She trusted the wrong men, and now the family must flee Indian Creek to stay ahead of British Loyalists who seek her papa's life.

But they can't risk being captured by taking the main road to Daniel Boone's trail that leads into Kentucky territory. They must endure the more dangerous and grueling hunter's path that leads to rough frontier forts along the Clinch River.

Passions are ignited, friendships are formed, and shocking lessons are learned.

Papa ignores the warnings to wait for other travelers, causing Mary's anxieties to worsen. Once they cross the Cumberland Gap, they're at the mercy of God and the Chickamauga Cherokee to make it to Fort Boonesborough alive. Frontiersmen tell them the settlement of Fort Boonesborough isn't defendable, and Mary doesn't want to continue. Papa is confident that the Indians are too busy preparing for winter to raid.

A few days from the fort, Mary is feeling hopeful for the future. Then disaster strikes, leaving the family devastated and heartbroken. There is no other choice. Mary must lay aside paralyzing fear and excruciating pain to save her family before time runs out.

Fleeing the Shadows (Dangerous Loyalties, Book Two) invites listeners to experience traveling the dangerous wilderness trails with Mary and her family through thick wild forests of Southwest Virginia and into Kentucky territory that leads straight into a Native American hornet's nest. Mary just wants to make it Fort Boonesborough and live in peace.

What listeners say about Fleeing the Shadows

As the author of Fleeing the Shadows, I’m once again honored by Angelina Kelly's excellent portrayal of Mary and her family as they escape British Loyalist along the old hunters’ path toward Daniel Boones' settlement in Kentucky territory. Angelina keeps the pace moving and presents the story's humor, tension, and characters' personalities well, as the family encounters the harsh realities of frontier life. Danger lurks around every turn and the Cherokee Indians are watching.