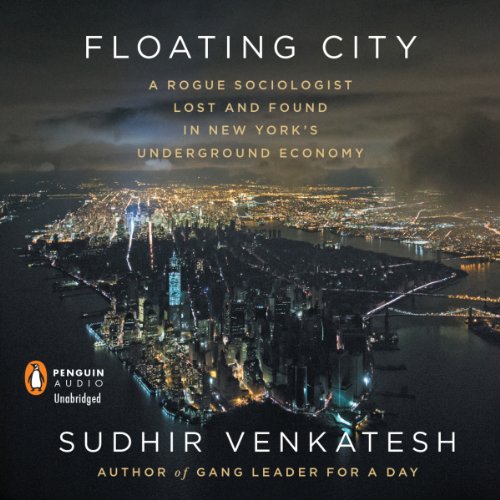 "[A] fascinating X-ray of the city…Venkatesh's engrossing narrative dissects the intricacies of illegal commerce." (Publishers Weekly)

New York is a city of highs and lows, where wealthy elites share the streets with desperate immigrants and destitute locals. Bridging this economic divide is New York's underground economy, the invisible network of illicit transactions between rich and poor that secretly weaves together the whole city.

Sudhir Venkatesh, acclaimed sociologist at Columbia University and author of Gang Leader for a Day, returns to the streets to connect the dots of New York's divergent economic worlds - and crack the code of the city's underground economy. Based on Venkatesh's interviews with prostitutes and socialites, immigrants and academics, high end drug bosses and street-level dealers, Floating City exposes the underground as the city's true engine of social transformation and economic prosperity - revealing a wholly unprecedented vision of New York.

A memoir of sociological investigation, Floating City draws from Venkatesh's decade of research within the affluent communities of Upper East Side socialites and Midtown businessmen; the drug gangs of Harlem and the sex workers of Brooklyn; the artists of Tribeca and the escort services of Hell's Kitchen. Venkatesh arrived in the city after his groundbreaking research in Chicago, where crime remained stubbornly local: gangs stuck to their housing projects and criminals stayed on their corners. But in Floating City, Venkatesh discovers that New York's underground economy unites instead of divides inhabitants: a vast network of "off the books" transactions linking the high and low worlds of the city.

after his first book was really excited. this one struggled for a common thread and never developed to anything with continuity

Positively interesting how the author shifts from one narrative to another.. Very different characters with so much in common. The book gives a good notion on the fluidity of the underground economy. And the external view from the author that becomes evident at the end of the chapters is mind blowing.

I'm a curious person by nature, and this book, like Gang Leader for a Day, gave me a glimpse into a world I'll never know firsthand. It's well-written, and I love finding audiobooks narrated by the author because I feel they're as they're intended to be read.

I first read about Sudhir in Freakonomics and have been enthralled in his studies and writing since. Hopefully he's working on a second book, but in the meantime, I'm not ready to get to the end of this one.

Great read. Love the part when Shine tells Sudhir to use change in place of the word fail. Blue bloods have many options.

Fascinating depiction of how the under economies are tied top and supported by white collar business. Venkatesh is a great storyteller. Perhaps the most compelling story he tells in floating city is his own. The central theme and idea of floating really captures each story he tells.

Would you listen to Floating City again? Why?

I would probably listen to Floating City again if there was a connection in future books if Sudhir would write.

New York was my favorite character. I have only been to New York twice after 2010 so I do not know how New York really was before Giuliani became the Mayor. I have heard of Hell's Kitchen but I am assuming it is not what Sudhir experienced back in 2003.

Have you listened to any of Sudhir Venkatesh’s other performances before? How does this one compare?

I read his first book years ago and have enjoyed his ethnography since! It feels like I am a fly on the wall while he talks about what he has observed in the communities he has observed.

I did not have any extreme reactions to the book. I did feel bad about Sudhir's personal life.

Great book! I finished it in less than a week!!