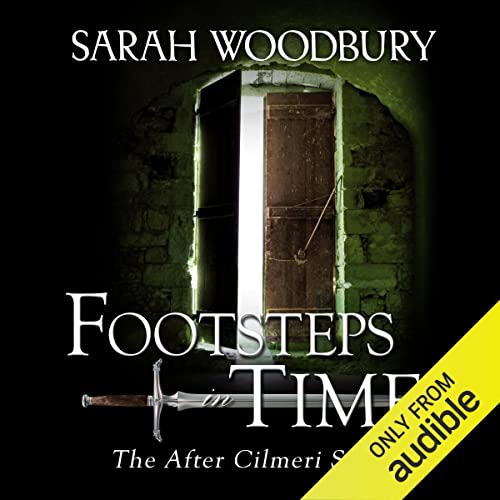 Written by: Sarah Woodbury
Narrated by: Laurel Schroeder
Try for $0.00

In December of 1282, English soldiers ambushed and murdered Llywelyn ap Gruffydd, the Prince of Wales. His death marked the end of Wales as an independent nation and the beginning of over seven hundred years under the English boot.

Footsteps in Time is the story of what might have happened had Llywelyn lived.

And what happens to the two teenagers who save him.

Footsteps in Time is the first book in the After Cilmeri Series.

What listeners say about Footsteps in Time: A Time Travel Fantasy

The Adventure gets Better!

I liked the prequel, “Daughter of Time”, so if you haven’t read/heard that, by all means start with it. And if you have already read “Daughter”, I can truly say that “Footsteps” is even better! There’s a youthful energy, blended with days of yore, and blended well. It’s touted as written for young adults, but with its immersion in history and its often complex situations of people in the power structure, it never ceases to keep this adult engaged and well along for the ride. Anna and David, sister and brother, are very different personalities, so their view of this part of the world and time period and how they engage it differ vastly. And for those that yearn for an artifact from the future to play a role, a small but fun one, you will get your wish.

The first person narrative does switch between David and Anna, but you get used to it quite quickly and quite frankly, it works.

The narration is very good. The narrator has a smoother pace than “Daughter”, so if you found some of that too fast paced, you’ll find “Footsteps” is just right.

Footsteps is the start of a much loved series. Laurel does a fantastic job voicing the characters!

I couldnt finish it!

The storyline might have been very interesting if written a bit better . Alot of choppy sentences and immature dialog. What bothered me the most was the narrator! She spoke quickly in a monotone, with short , clipped words. She reminded me of Debbie Downer on Saturday night Live. It seemed like all was doom and gloom. I really wanted to read this series but wont even try finishing this one .

Frequently the narration is too fast and gives a sense of anxiety even in calm peaceful parts. Story not strong

This was a free audio book from the author, Ms Woodbury ask if I would review.
Prior to reading this book I read Daughter of Time: A Time Travel Romance: After Cilmeri, Book 0.5 – this book was about Meg and her daughter Anna that accidentally slips through time and meets up with Llywelyn, the Prince of Wales. This particular book centers on a relationship between Meg and Prince Llewlyn, and just as Meg is about to give birth to their child she pops back to her time.

Footsteps in Time starts when 2 teenagers, Anna (age 17) and her brother David (age 14) arrives on December of 1282 and interrupts the murder of Llywelyn ap Gruffydd. As the story progresses David will learn that Llywelyn is his father and somehow no matter what happens to David. There are several incidents when David gets in some tight predicaments including meeting up with Edward – David always comes away unscathed. At some point Anna marries and Meg arrives and marries Llywelyn.

I highly doubt I will continue with this series – I found the time period is one I have no interest in and this particularly series rather childishly written.

sorry this us not up to par

I hate to give bad reviews.

But truthfully the story is not interesting.
And the narrator has a lot of work to do with her storytelling ability.

she is delivering it in a very staccato mode and not feeling the characters emotions or situations.

The author and the narrator I think , need to go back and reassess what they're doing because there's a lot of potential there but so far it did not manifest itself in this story and telling.

AN INTRINSIC TIME TRAVEL STORY. GREAT THEORY ON A TWIST IN THE TIMELINE. VERY WELL WRITTEN AND IS ACCEPTABLE FOR PEOPLE OF ALL AGES.
NARRATOR IS GREAT AND EASY TO FOLLOW.
I WOULD RECOMMEND THIS TO ALL MY FRIENDS. COULD NOT PUT IT DOWN.

My my favorite narrator of all timesy

Laurel Schroeder is In my estimation the perfect narrator for all the books I’ve listened to in a long time. If she could narrate all the highland stories I’d be in heaven. Men narrating is an injustice for highland series. I cringe when I hear them reading.

A good book marred by a weak performance.

I enjoy time travel stories, probably due to the history and cultures encountered in them. This one was interesting, though somewhat predictable, but I will very likely read the entire series. My only complaint is with the performance. Though she is skilled with the accents and most pronunciations her delivery is choppy and pedantic with little or no life in her voice relating to the action on the page. It was distracting enough to me that there were times when lost the thread. I will seek out the rest of the books in e-book format.

Poorly written. Poorly narrated. Listened to an hour and returned it. "Oh, we must have traveled through time from Pennsylvania to Wales."