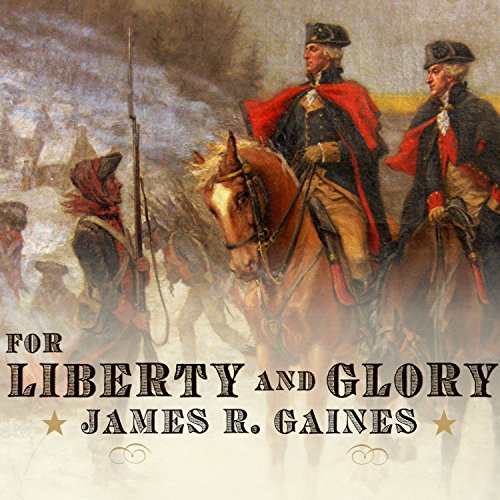 For Liberty and Glory

They began as courtiers in a hierarchy of privilege, but history remembers them as patriot-citizens in a commonwealth of equals.

On April 18, 1775, a riot over the price of flour broke out in the French city of Dijon. That night, across the Atlantic, Paul Revere mounted the fastest horse he could find and kicked it into a gallop.

So began what have been called the "sister revolutions" of France and America. In a single, thrilling narrative, this audiobook tells the story of those revolutions and shows just how deeply intertwined they actually were. Their leaders, George Washington and the Marquis de Lafayette, were often seen as father and son, but their relationship, while close, was every bit as complex as the long, fraught history of the French-American alliance. Vain, tough, and ambitious, they strove to shape their characters and records into the form they wanted history to remember. James R. Gaines provides fascinating insights into these personal transformations and is equally brilliant at showing the extraordinary effect of the two "freedom fighters" on subsequent history.

"Absorbing....Distinguished as much by the writing as the argument....Fresh." ( Publishers Weekly)
"A consistently able, accurate, and entertaining guide....A welcome and highly readable addition to the field." (Ron Chernow, author of Alexander Hamilton)

What listeners say about For Liberty and Glory

What made the experience of listening to For Liberty and Glory the most enjoyable?

More insight into Lafayette and also the more detailed involvement of the French involvement in the American Revolution .

What other book might you compare For Liberty and Glory to and why?

A Glorious Cause . Also get insight into how the French got involved other than the standard Ben Franklin credit.

Excellent presentation. You get the good and the bad,as well as the information on how the French had aspirations of unseating Washington and taking over the war effort against England.

Gave me the feeling of being proud of individauls like Washington and Lafayette, that they had the guts to put their own lives and repoutations on the line for a new nation.

Easy read/listen despite many intimate details.

A man with a mastery both of English and French!

The way this book discusses and embellishes on different American revolutions and early governments simultaneously is amazing. The story of Marquita Lafayette and George Washington and their relationship is definitely worth the time and money put into this book, and I recommend for all.

I feel like it may be necessary to extol the fantastic ability of the narrator who mastered both the French and the English beautifully.

A struggle to hang in there and finish

What disappointed you about For Liberty and Glory?

I would say that this book contains 3 Acts. The first Act takes you through a journey of these two men through the American Revolution. The second Act comprises the French Revolution. The third Act paints a good picture of these two men in the twilight of their life. The book is very, very hard to read. At times, it becomes so dry and confusing I almost quit. Extremely disorganized. It covers an enormous amount of time, but it lacks consistent chronological order. I commend the author for taking on such a complicated work. If you have knowledge about the French revolution, then you might enjoy Act 2. I had to make myself finish it. I chose this book because I am fascinated with the relationship between Washington and Lafayette. I was hoping for a deeper insight in this relationship. Chernow's "Washington, A Life", does a much better job in this regard. I was just hoping for more.

Has For Liberty and Glory turned you off from other books in this genre?

What does Norman Dietz bring to the story that you wouldn’t experience if you just read the book?

I think that he did an extraordinary job considering the topic and all the players of history in this book.

My favorite part was the discussion of Lafayette's return to America as an older man; however, as I said above, the author speaks of Lafayette's death before he discusses this trip to America. Better order would have been nice.